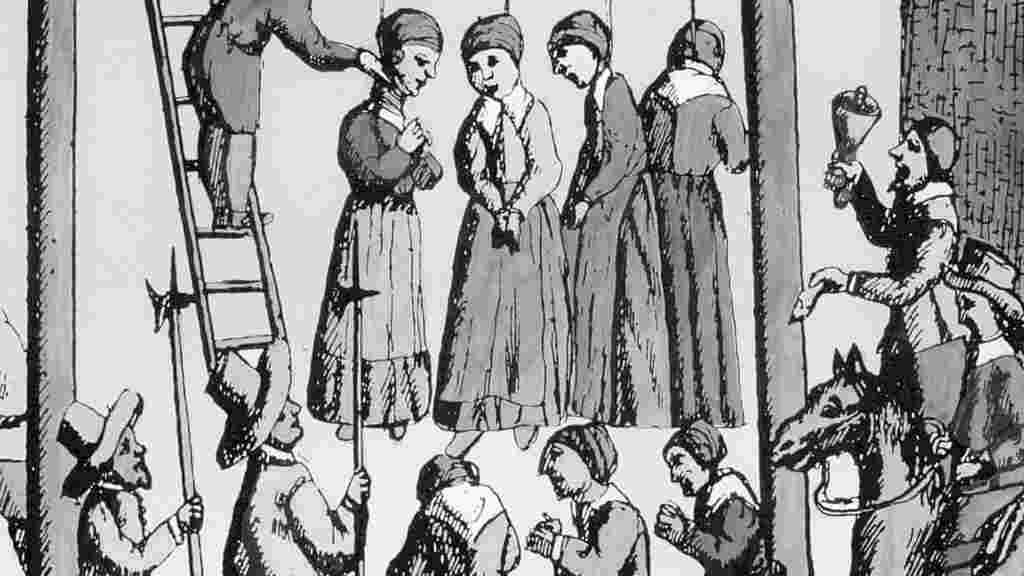 It is well known that the 1611 King James Version of the Bible and the 1769 respelling were commissioned and authorised by King James I of England and Ireland, also known as James VI of Scotland. However, few are aware that this King James was himself the author of several books, two of which are about demons: “Newes from Scotland” and “Daemonologie”.

Even though James was the son of Mary Stuart, a Catholic Queen of Scotland, he was brought up a Protestant within the Scots Kirk. Besides being Protestant, James was well read. By the time he assumed the throne, his tutors had instilled in him a passion for books and learning.

During his reign, there were several attempts on his life. One such attempt was the Gunpowder Plot. Often attributed to Guy Fawkes, that infamous plot involved both Jesuit agents and English Catholics. The involvement of Jesuits meant that the Gunpowder Plot was essentially a satanic conspiracy. Had the conspirators succeeded in blowing up Westminster on 5th November 1605, the King and all of the Lords of Protestant England would have been killed. Had the conspirators succeeded in 1605, there might not have been a KJV in 1611. Indeed, the KJV was commissioned in 1604, and so the plot of 1605 was likely a response to that.

Before the satanic plot of 1605, there were many others. The following is a clip of a lecture by the historian James Wright of Gresham College that says more on this. Though the lecturer does not appear to be a Christian or someone who understands the enemy (ref. Ephesians 6:12), he is speaking about the historical record of the United Kingdom of James I, which of course was very Christian. It was this series of supernatural events plus information from the interrogation of certain witches, including uncanny information that a witch could only have gotten via a demon, that prompted King James to write Daemonologie, his dissertation on demons that was first published in 1599.

Daemonologie takes the form of a Socratic dialogue of sorts between two persons, Philomathes and Epistemon. The book is not easy to read because of the Jacobean English spelling. What the book says about demons is based on the Bible and furthermore on James’s findings as a witch hunter and an interrogator of witches.

First, it must be said, it is impossible to be Christian and at the same time insist demons do not exist.

Put on the whole armour of God, that ye may be able to stand against the wiles of the devil. For we wrestle not against flesh and blood, but against principalities, against powers, against the rulers of the darkness of this world, against spiritual wickedness in high places.

Besides the passage in Ephesians 6 about the rulers of the darkness of this world, Revelation 12 prophesies a war in heaven between angels that are loyal to God and angels that have rebelled against God. Demons of course are the rebellious angels. These angels are the ones who have pretended to be gods, establishing religions in this world different from Judeo-Christianity. These angels are also responsible for the many heretical denominations of Christianity, and also for leading many a church astray. And further, these angels are the source of magic for witches and other sorcerers.

Daemonologie defines witchcraft as some interaction between a human and a demon. It may involve an incantation of words, the consumption of certain herbs, or a configuration of stones. These things are done either to empower and enrich the witch or else to curse and harm someone else. Witchcraft may also involve astrology, reading meaning from the course of planets and stars, that is to say, foretelling personal events via demons.

Daemonologie explains when witchcraft is performed it is not so much the witch compelling the demon to do something, but more the demon enticing the witch to condemn her own soul, an idea like that of the bargain of Faust.

An interesting point of Daemonologie is that often a demon appears by causing the person or persons in the vicinity to hallucinate its appearance – to think a being is there and visible to the human eye when it is not. This explains why a demon can take various forms.

And no marvel; for Satan himself is transformed into an angel of light.

Spectras are spirits that trouble a house or a place, which many today might describe as a haunting. Nowadays and among non Christians especially, people think of ghosts as being the spirits of dead humans. However, the Bible says, ghosts and similar apparitions cannot be human souls because the dead are either asleep in the grave, or else confined in the prison of hell, or else in heaven (ref. Revelation 20:12-13; John 5:28-29).

Obsession involves an Incubi or a Succubi spirit that troubles or abuses a person at various times of the day.

Possession involves a spirit that enters into the body of a person to take over that person’s body and to speak in that person’s stead.

Phairies are spirits that prophesy, consort and transport their servants.

A final point Daemonologie makes is that any investigation and assessment of witchcraft must be careful, for it is as much a mistake to condemn the innocent as it is to let the guilty go free.

When James became King, he made it a crime punishable by death to try to bring down the person of the King using witchcraft.

Do ye not know that the saints shall judge the world? and if the world shall be judged by you, are ye unworthy to judge the smallest matters? Know ye not that we shall judge angels? how much more things that pertain to this life?

Now, I mentioned above that James I of England was a renowned witch hunter and even an interrogator of witches.

Philip IV of France was another renowned witch hunter. In Philip IV’s case, his wife Joan I of Navarre apparently had died during childbirth because of witchcraft involving a voodoo-like doll. History remembers Philip IV as the one who took on and disbanded the Knights Templar, a powerful military order that betrayed Christendom by secretly worshipping Satan.