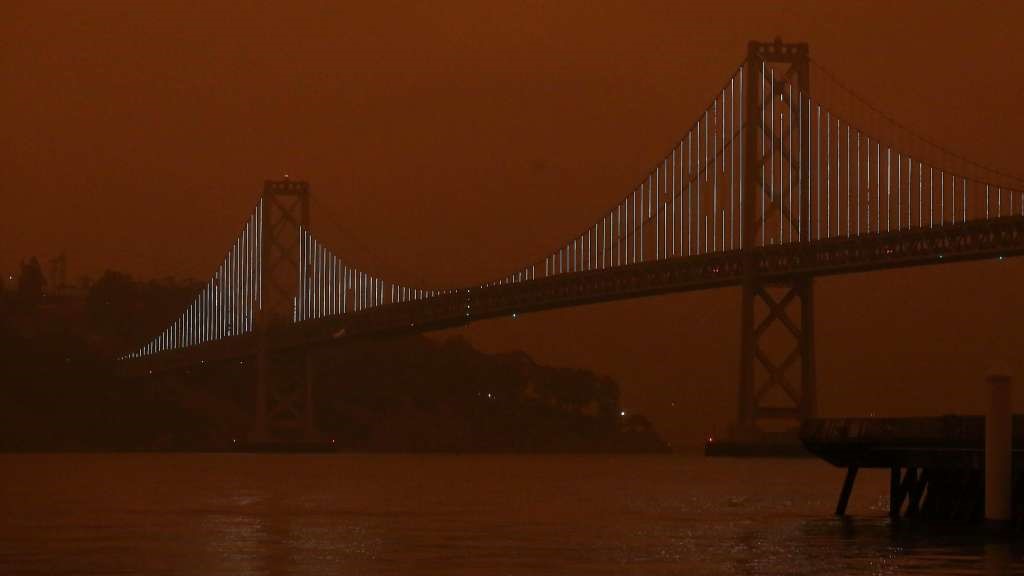 Tens of thousands of residents so far have been forced to evacuate the affected areas (ref. 1). The fires have burnt forests as well as hundreds of homes and businesses. In California alone, over 2 million acres have already burnt. In Oregon, 5 towns have been substantially destroyed (ref. 4).

On the morning of 9th September, in San Francisco bay, the sky was darkened and reddened because of the considerable smoke of the fires. The San Francisco Chronicle described it as “the day the sun didn’t rise”, and even remarked “it looked as if the world were ending” (ref. 5).

The winds that have fanned the flames, some gusts topping 45 mph, have been ironically labelled “Diablo” or devil winds (ref. 2), because according to meteorologists the winds are purported to be coming from the direction of a place in California called for some reason “Mount Diablo”.

In my opinion, these winds are not from the devil but from God.

What is more, the sun becomes as it were black. And the sky red. And all because of a mighty wind! Surely this is a sign of the apocalypse.

And I beheld when he had opened the sixth seal, and lo, there was a great earthquake; and the sun became black as sackcloth of hair, and the moon became as blood; And the stars of heaven fell unto the earth, even as a fig tree casteth her untimely figs, when she is shaken of a mighty wind.

Furthermore, on 7th September, California experienced its hottest day in September ever. In Los Angeles County, the temperature reached 121 degrees Fahrenheit, which is about 49 degrees Celsius (ref. 3).

It is Bible prophecy that the fourth angel will have power to scorch the earth with heat.

Speaking of the fourth beast, did you know that the word California stems from the Spanish califa and literally means “land of the caliph”?

Also, California, and San Francisco in particular, is home to Bohemian Grove, a place where the elites of America gather from year to year, to stand before a towering idol, an occult statue of an owl.

Now, it is worth noticing that during his ministry, the Son of man spoke of a red sky being a sign of the times – in that instance, a sign of the first coming of the Messiah.

The Pharisees also with the Sadducees came, and tempting desired him that he would shew them a sign from heaven. He answered and said unto them, When it is evening, ye say, It will be fair weather: for the sky is red. And in the morning, It will be foul weather to day: for the sky is red and lowring. O ye hypocrites, ye can discern the face of the sky; but can ye not discern the signs of the times?

My point is, a red sky is an apocalyptic sign.

Last year, something similar happened in NSW Australia. Fuelled by extreme wind and heat, raging bush fires caused the sky over Port Macquarie to become red. Lachlan Macquarie was the governor of NSW who allowed Freemasonry to establish itself in Australia, despite being proscribed throughout the British Empire at the time. Macquarie may have worn a red coat but he betrayed his king and his army, and consequently Australia is now in these last days the way it is.

These signs mean the end is near! Satan must lose all power in the world, including military power.

So, repent, and believe the gospel of the kingdom of God.

Of course, for one kingdom to rise, the other must fall.