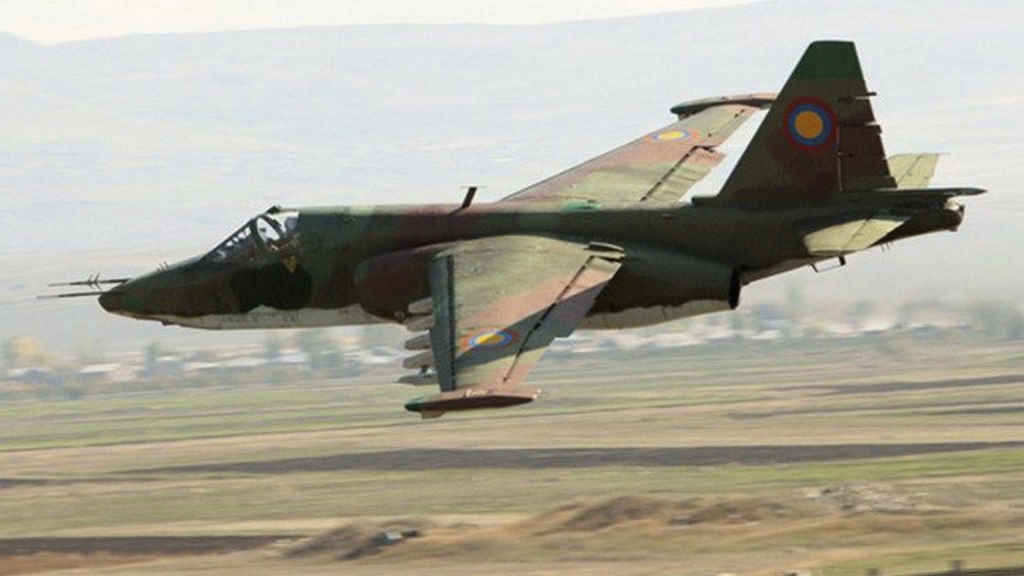 The fighting between Azerbaijan and Armenia is intensifying. Casualties on both sides continue to rise (ref. 1).

Two days ago, it was reported that an Armenian Su-25 ground attack plane was shot down by an F-16 fighter jet flying in Azerbaijani airspace (ref. 2). Apparently, the F-16 took off from the city of Kanja in Azerbaijan. Since the airforce of Azerbaijan does not have any F-16s, that F-16 must have been a Turkish warplane.

Ankara and Baku have denied the report, insisting that two Armenian Su-25s must have somehow collided during takeoff (ref. 2).

Today, Shushan Stepanyan, a spokeswoman of the Armenian Ministry of Defence, revealed that a Turkish E-7T flying in Turkish airspace is providing airborne early warning and control to Turkish F-16s and Azerbaijani Su-25s in Azerbaijani airspace (ref. 3). Information on battlespace awareness is an integral part of modern warfare, whether that information is coming from satellites or AWACs. This Boeing 737 AEW&C and the F-16s mean Turkey is now clearly a belligerent in the war.

Furthermore, when the war first started, it was reported that Turkey was employing and transporting hundreds of Syrian jihadists to fight in Azerbaijan. Ankara and Baku denied it. Since then, three Syrian jihadists have been killed on the battlefield by Armenian forces (ref. 4).

Truth may well be the first casualty of war, but the Bible warns that deception, or craftiness, will be a significant trait of the fourth beast, the empire of the Antichrist.

And in the latter time of their kingdom, when the transgressors are come to the full, a king of fierce countenance, and understanding dark sentences, shall stand up. And his power shall be mighty, but not by his own power: and he shall destroy wonderfully, and shall prosper, and practise, and shall destroy the mighty and the holy people. And through his policy also he shall cause craft [deception] to prosper in his hand…

Now, notice, a warlord of ISIS, Sayf Balud, has been chosen by Turkey to lead these Syrian mercenaries in Azerbaijan (ref. 5).

This combination of mercenary and professional soldier brings to mind the toes of the statue of Daniel’s vision that are part clay and part iron.

Today, Turkey is the second strongest military power in NATO, second only to the USA. For sure, Turkey will be a part of the empire of the Antichrist, the Islamic Caliphate.

Armenia, on the other hand, has a formal military alliance with Russia through the Collective Security Treaty Organization. The CSTO is why there is a Russian military base in Armenia.

As of now, Turkey is on the opposite side of Russia in no fewer than three theatres of war: Syria, Libya, and Artsakh or Nagorno-Karabakh.

The Bible says, Armageddon is the culmination of a world war between two sides.

… a stone was cut without hands, which smote the image upon his feet that were of iron and clay, and brake them to pieces. Then was the iron, the clay, the brass, the silver, and the gold, broken to pieces together, and became like the chaff of the summer threshingfloors; and the wind carried them away, that no place was found for them: and the stone that smote the image became a great mountain, and filled the whole earth.