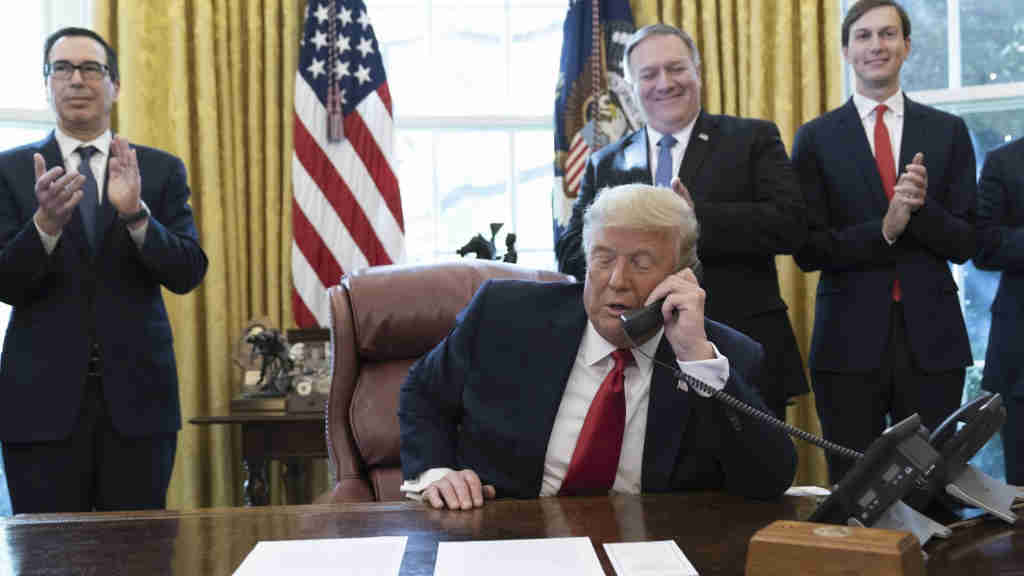 Yesterday, Donald Trump announced that the US had brokered a deal between Sudan and Israel, in which Sudan would normalise relations with Israel and in return the US would lift sanctions and remove Sudan from its list of State Sponsors of Terrorism (ref. 1). This after the US-brokered “Abraham Accords” – a deal announced in August between the UAE and Israel, and then another in September between Bahrain and Israel.

Though Trump touted the deal between Sudan and Israel as done, the transitional government of Sudan, which comprise of the so-called Forces of Freedom and Change and the Transitional Military Council, said that the deal would require formal legislative approval. As of now, Sudan remains without a parliament and elections will happen only in 2022.

Today, the news is that several political parties of Sudan have spoken out against the deal, saying the transitional government does not have the authority to sign such a deal on behalf of Sudan. Sudan’s Popular Congress Party, the second most prominent component of the Forces of Freedom and Change, has rejected the deal (ref. 2). The Sudanese Umma Party, led by Sadiq Al-Mahdi, who is the great-grandson of Muhammad Ahmad, the Mahdi of 1881-85, has threatened to withdraw support for the transitional government because of the deal (ref. 3). What is more, demonstrations have started in Khartoum over the deal.

Now, I should explain, such a deal, if it were to happen, would contradict Bible prophecy. It is clear from Daniel 11:43 that Sudan, which is “Cush”, is to side with the Antichrist. Today, North Sudan is very Islamic.

… he shall have power over the treasures of gold and of silver, and over all the precious things of Egypt: and the Libyans and the Ethiopians [Cushim] shall be at his steps.

Modern-day Ethiopia, which was once known as Abyssinia, is “Sheba” in the Bible, rather than “Cush”. Today, Ethiopia is mostly Christian or atheist, and aligned with China, as per Isaiah 19:6.

Regarding Sudan, it is the will of God that the Beast with seven heads and ten horns should form in these last days.

For God hath put in their hearts to fulfil his will, and to agree, and give their kingdom unto the beast, until the words of God shall be fulfilled.

Therefore, Sudan cannot now be at peace with Israel.

I have heard some prophecy pundits say this deal is the covenant with many of Daniel 9:27, a deal that is to be made for seven years and then broken after three and a half years.

… and the people of the prince that shall come shall destroy the city and the sanctuary; and the end thereof shall be with a flood, and unto the end of the war desolations are determined. And he shall confirm the covenant with many for one week: and in the midst of the week he shall cause the sacrifice and the oblation to cease…

About that, I think the Daniel 9:27 deal was made covertly years ago between Israel and the prince that shall come, who is Satan (ref. Revelation 12:9), which explains why Israel once helped Sunni jihadists against Assad (ref. 4), despite the prophecies of Isaiah 17 – that the Antichrist will eventually take both Damascus and the fortress of Ephraim, i.e. northern Israel (ref. Isaiah 17:1-6). For many years, Israel, duped by the CIA, regarded Shia Iran and Hezbollah and Assad as greater threats than Sunni Al Qaeda or ISIS. Remember, the Antichrist, also known as the Assyrian, is the leader of ISIS, 666. And it is he, possessed by Satan, who will essentially stop the daily sacrifice (ref. Daniel 11:31), which has yet to start. Thus, I think Daniel 9:27 is about Israel and ISIS.

If I am wrong, there are more than seven years to go. If I am right, the world is on the cusp of the final three and a half years.

And this is not his only attempt. Remember, years ago, Trump was being strangely obsequious to Vladimir Putin, while actually despising Russia and all things red. For that matter, there was Trump’s weird man-love for Kim Jong Un, after having belittled him as the little rocket man. Fortunately, nowadays, Trump can no longer contain his contempt for Xi Jinping and China.

Notice, days ago, Putin spoke of the prospect of a military alliance between Russia and China (ref. 5). Behold, the prophesied “kings of the east”! Prophetically, China and Russia are to resist the Beast and also Mystery Babylon, also known as “the hammer of the whole earth” (ref. Jeremiah 50:23). Clearly, Trump and his Pepe-the-frog, alt-right lot, including Steve Bannon, can no longer pull Russia away from China.

This is why the LORD’s prayer reads “Thy kingdom come, Thy will be done”.

Trump and his ilk might want to stop the apocalypse. They might want to carry on living deliciously. They might even want the Arab world to now be at peace with Israel, while Israel remains under the yoke of Satan. But fate cannot be challenged.

The LORD of hosts hath sworn, saying, Surely as I have thought, so shall it come to pass; and as I have purposed, so shall it stand: That I will break the Assyrian in my land, and upon my mountains tread him under foot: then shall his yoke depart from off them, and his burden from off their shoulders. This is the purpose that is purposed upon the whole earth: and this is the hand that is stretched upon all the nations. For the LORD of hosts hath purposed, and who shall disannul it? and his hand is stretched out, and who shall turn it back?