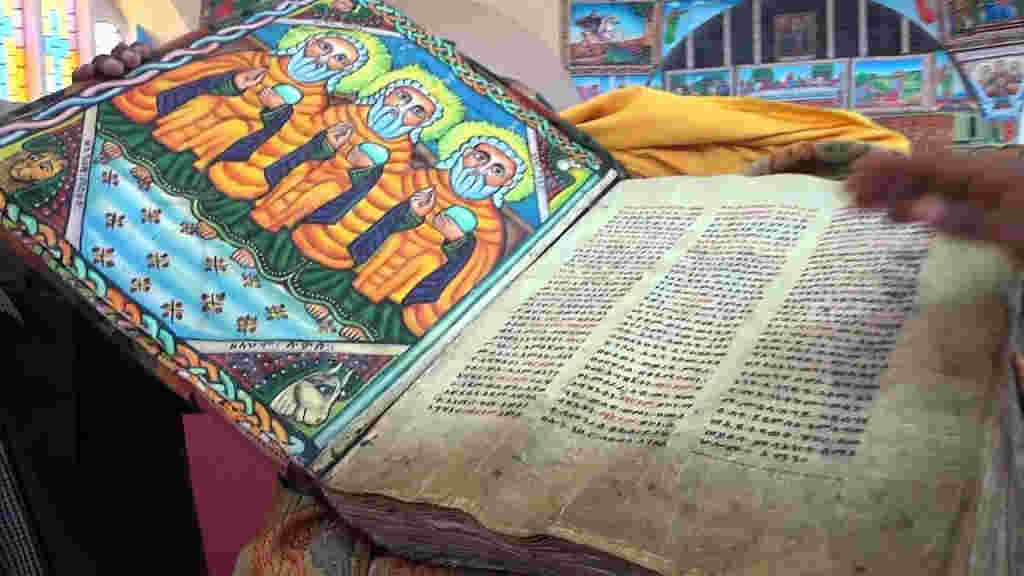 Around late November 2020, during the initial phase of Abiy Ahmed Ali’s war against the Ethiopian province of Tigray, Eritrean soldiers, allied to the federal government of Ethiopia, massacred hundreds of Ethiopian civilians, namely Tigrayan Christians, who had gathered at the Cathedral of Mary of Zion in Axum, which is adjacent to the Chapel of the Tablet, which is thought to house the Ark of the Covenant.

Various rumours of an atrocious mass killing at Ethiopia’s holiest site have been circulating for weeks. But with Tigray cut off and journalists kept out, it has been difficult to verify what happened.

Now, a deacon, who witnessed it all, has spoken about the massacre on the record to the Associated Press (ref. 1). He said some eight hundred civilians were killed that day. Many had gathered inside and around the Cathedral of Mary of Zion. Some went there to pray. Others went there to claim sanctuary as is the custom of Ethiopian churches. Others yet went there to human-shield the Ark of the Covenant, thought to be in the same compound.

The deacon recalls that Eritrean soldiers burst into the cathedral, dragged everyone outside and then opened fire indiscriminately. Some were killed instantly. Others stumbled over the dead as they tried to escape or hide. Others yet, including him and another priest, managed to run for their lives.

The shooting continued outside the compound, as the Eritreans went house to house searching for anyone that might be a TPLF fighter. This went on for two days.

The deacon recalls, since bodies were left where they fell, the stench of death was strong. To his horror, on the night of the first day of the massacre, hyenas came down from the hills nearby and began to feed on the corpses.

When someone began to put a few dead bodies on a horse cart to bury them, Eritrean soldiers stopped him and instructed him to throw the bodies back on the street (ref. 1).

Finally, when the Eritrean soldiers did leave Axum, the residents who were left gathered all the dead bodies, collected any identity cards that could be found for safekeeping, and buried all of the dead in a mass grave.

And when they shall have finished their testimony, the beast that ascendeth out of the bottomless pit shall make war against them, and shall overcome them, and kill them. And their dead bodies shall lie in the street of the great city, which spiritually is called Sodom and Egypt, where also our Lord was crucified. And they of the people and kindreds and tongues and nations shall see their dead bodies three days and an half, and shall not suffer their dead bodies to be put in graves.

I am not sure if leaving the dead bodies of one’s enemies on the street is characteristic of Muslims generally. But, according to the Bible, it is something that will happen in the last days.

Another case of this sort of thing that I once read about involved the Turkish-backed Free Syrian Army in Syria. In February 2018, a video emerged online of two FSA fighters posing for selfies near the mutilated corpse of a female Kurdish fighter of the YPG, Barin Kobani, in which one of the jihadists had his boot on her naked breast (ref. 2).

Another case involved the Turkish army in Turkey. In August 2015, after Turkish special forces had killed a female Kurdish militant of the PKK, Kevser Elturk, her bloodied corpse was stripped, mutilated, and left on the street (ref. 3).

Another yet involved the Turkish police in Turkey. In October 2015, Turkish police was filmed dragging on the street, tied to the back of their vehicle, the dead body of a Kurdish man, Haci Lokman Birlik, who was killed because he was a militant affiliated with the PKK (ref. 4).

Concerning the PKK, the YPG and other Kurdish groups that Turkey vehemently opposes, it is no coincidence that these Kurdish groups were once Marxist. Remember what I said previously about Islam and Satanists versus the reds in these last days?

Apart from this massacre in Axum, there are reports of numerous Tigrayan women and girls being raped by Eritrean and Ethiopian soldiers on the side of Abiy Ahmed Ali (ref. 5). Some were raped at gunpoint. Others were forced to have sex in exchange for basic supplies.

Starvation also is being used as a weapon against the province of Tigray (ref. 6). Crops on the verge of harvest are being deliberately burnt. Shops are being looted. Emergency aid to Tigray is largely being blocked. Two warehouses of UN food aid have been purposefully destroyed. There is also no clean water. Doctors in Sudan say, refugees that have reached camps over there are emaciated. And many tell of others they know that have died of malnutrition.

For nation shall rise against nation, and kingdom against kingdom: and there shall be famines, and pestilences, and earthquakes, in divers places. All these are the beginning of sorrows.

The tribulation has begun! It might not have reached you yet, but it has begun.

Do not underestimate how evil Satan is.