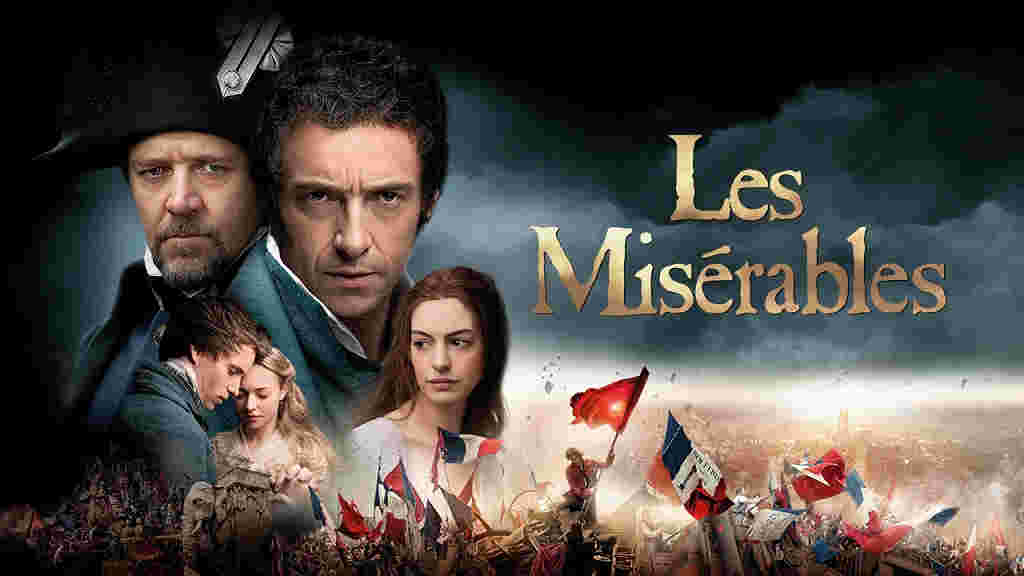 What is most remarkable about Victor Hugo’s Les Misérables is that it is a story that combines Christianity and the reds! It is unusual to say that one has something to do with the other.

Yet I have been saying for some time now that, in these last days, the reds are on the side of Jesus Christ.

Who is this that cometh from Edom, with dyed garments from Bozrah? this that is glorious in his apparel, travelling in the greatness of his strength? I that speak in righteousness, mighty to save. Wherefore art thou red in thine apparel, and thy garments like him that treadeth in the winefat? I have trodden the winepress alone; and of the people there was none with me: for I will tread them in mine anger, and trample them in my fury; and their blood shall be sprinkled upon my garments, and I will stain all my raiment. For the day of vengeance is in mine heart, and the year of my redeemed is come.

Late last year, I noticed that the epilogue of the 2012 movie Les Misérables is very Christian and even prophetic.

“Do you hear the people sing?
Lost in the valley of the night.
It is the music of a people
Who are climbing to the light!

For the wretched of the earth
There is a flame that never dies.
Even the darkest night will end
And the sun will rise.

We will live again in freedom
In the garden of the Lord.
We will walk behind the plough-share;
We will put away the sword.
The chain will be broken
And all men will have their reward!”

At the time, it struck me also that the song “Do you hear the people sing?” from the same movie is very red.

“Will you join in our crusade?
Who will be strong and stand with me?
Beyond the barricade
Is there a world you long to see.
Then join in the fight
That will give you the right to be free!

Do you hear the people sing?
Singing a song of angry men!
It is the music of a people
Who will not be slaves again.
When the beating of your heart
Echoes the beating of the drums,
There is a life about to start
When tomorrow comes.

Will you give all you can give
So that our banner may advance?
Some will fall and some will live
Will you stand up and take your chance?
The blood of the martyrs
Will water the meadows of France!”

Yesterday, I watched all of the movie Les Misérables for the first time. This was my first encounter with Victor Hugo’s story.

The novel Les Misérables is of the genre historical fiction. The story is set in France, circa 1817-1833. The reign of terror of the guillotine, a satanic revolution, has long past. The Napoleonic era, which Leo Tolstoy described as antichrist, also has ended. Now France is ruled by the Orléanist king, Louis Philippe I.

A big part of Les Misérables is the 1832 uprising in Paris, which Victor Hugo himself would have witnessed. Unlike the revolution of the 1790s, which was more about beheading the powers that be and beheading the men of the cloth, the uprising in 1832 was essentially provoked by the sufferings of the poor.

While Paris was industrialising and thus attracting people from the countryside, many were paid a meagre wage and had to live in cramped, inadequate apartments. Those who fell by the wayside were condemned to live on the streets a life of poverty. Thus, for many, life was miserable.

To make matters worse, Paris at the time was plagued by cholera. The rich lived in vast estates away from the slum-like conditions of Paris. For this reason, more of the poor died from the epidemic than the rich.

It all came to a head when Jean Maximilien Lamarque, a former military officer and member of Parliament that championed the rights of the poor, also died of cholera. Some Parisians used the funeral of Lamarque to protest the situation. During the protests, they waved flags that were red!

“We need a sign
To rally the people
To call them to arms
To bring them in line!

Red, the blood of angry men!
Black the dark of ages past!
Red, a world about to dawn!
Black, the night that ends at last!”

It must be said that the Parisian uprising of 1832 predates Marxism! Das Kapital was published in 1867, and The Communist Manifesto was published in 1848. Furthermore, nowhere in either of the treatises of Karl Marx is red ever the colour of communism. Victor Hugo wrote about flags that are red in his work of historical fiction because he must have witnessed the Parisians of 1832 with flags that were red.

Now, moving on to the Christianity of Les Misérables: the character arc of Jean Valjean exemplifies redemption in Christianity. A prisoner convicted of theft on parole is transformed by the charity and forgiveness of a bishop, and thereafter seeks to live a new and useful life, caring for others in need.

And that ye put on the new man, which after God is created in righteousness and true holiness… Let him that stole steal no more: but rather let him labour, working with his hands the thing which is good, that he may have to give to him that needeth.

Indeed, it is that charity of silver that gives Jean Valjean the opportunity to become an industrialist and a mayor, someone in a position to help Fantine and then Cosette.

And now abideth faith, hope, charity, these three; but the greatest of these is charity.

Charity more than knowledge can save those who are lost. This is the meaning of the preaching of the Son of man in Luke 6.

Notice also that towards the end of the story, Jean Valjean is merciful to Javert. Jean Valjean does not kill Javert when he can, and instead lets him go. Still, Javert is unable to change his ways, and so he dies.

“Who is this man, what sort of devil is he?
To have me caught in a trap and choose to let me go free?

Now to the title of the story, Les Misérables. That too comes from the preaching of the Son of man in Luke 6.

What does it mean that blessed be ye poor, and woe unto you that are rich? Surely, it does not mean that all of the poor are righteous and all of the rich are damned. No, and in Les Misérables, Victor Hugo himself made an effort to illustrate some of the damned among the poor, namely the Thénardiers, and also some of the righteous among the rich, namely Bishop Myriel and Marius Pontmercy.

Woe unto him that buildeth his house by unrighteousness, and his chambers by wrong; that useth his neighbour’s service without wages, and giveth him not for his work;

In other words, these people have become rich only because they have defrauded someone or defrauded the wider public.

There is a lot in today’s economics that is wrong, a sleight of hand. Company tax cuts, again and again, coupled with hikes in consumption tax enrich the already rich at the expense of the poor. Keynesianism transfers wealth from future generations to the current generation. Modern Monetary Theory results in hyperinflation, and thus a redistribution of wealth from the populace to those who control the new currency. Printing money to finance the government instead of raising taxes may be politically expedient in the short run but will impoverish everyone in the long run. Bailing out with taxpayer funds investment banks that have made the wrong bets is further daylight robbery.

In a world without the devil, no one would be able to go bankrupt six times and still live luxuriously as if he were a billionaire.

In due time, the field of economics, along with the wrongs of this world, will be corrected. At that time, among the nations under Christian rule, there will be no more poverty and miserableness.

“Red, the blood of angry men!
Black the dark of ages past!
Red, a world about to dawn!
Black, the night that ends at last!”