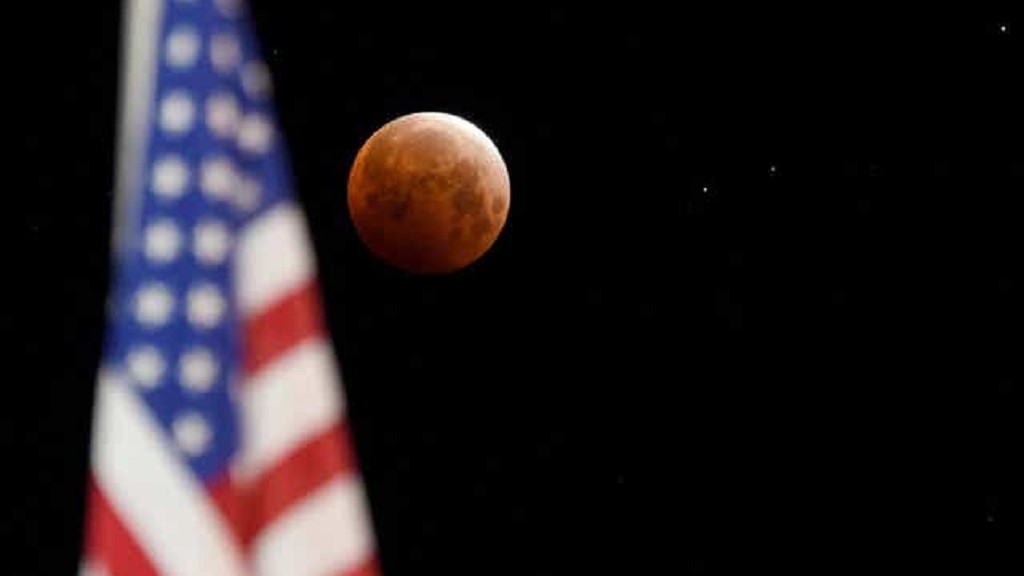 On 26 May, the moon once more turned blood red. This is an omen, a marvellous reminder of things to come.

And I will shew wonders in the heavens and in the earth, blood, and fire, and pillars of smoke. The sun shall be turned into darkness, and the moon into blood, before the great and the terrible day of the LORD come.

The full moon, described as a super blood moon, appeared briefly, for a mere fifteen minutes, in the night sky over the lands of the Pacific Ring of Fire (ref. 1).

Surely it is no coincidence that, over the last week or so, volcanoes across the world have been erupting.

In the Democratic Republic of Congo – the place that inspired Joseph Conrad’s “Heart of Darkness”, which in turn inspired Francis Ford Coppola’s “Apocalypse Now” – Mount Nyiragongo erupted and after dark poured a river of lava into villages near the city of Goma, destroying hundreds of homes and causing thousands of people to flee in the night for their lives (ref. 2). There was a pillar of smoke, and the night sky even became red!

As it happens, volcanoes in Japan, Indonesia, Guatemala, Ecuador, Peru, Chile have also erupted (ref. 3). All these are part of the Pacific Ring of Fire.

And beyond that, Mount Etna in Italy has also erupted, and continues to erupt (ref. 4), producing a pillar of smoke, and spraying molten lava, literally fire and brimstone.

Mount Etna is Europe’s highest volcano, surpassing even Vesuvius. The name “Etna” is said to derive from the Greek aithο, meaning “I burn”.

Now, returning to the super blood moon of 26 May, in the USA, this full moon was visible only on the west coast, where Yellowstone a supervolcano happens to be.

I should remind that the first trumpet or vial of Revelation will be marked by the eruption of a supervolcano.

The first angel sounded, and there followed hail and fire mingled with blood, and they were cast upon the earth: and the third part of trees was burnt up, and all green grass was burnt up.

After that, the second trumpet or vial of Revelation will see much of the Pacific Ring of Fire explode.

Remember, all seven trumpets or vials of Revelation are “the wrath of God” (ref. Revelation 16:1).

In the last days, there will be blood and fire and pillars of smoke, as Joel prophesies.

For our God is a consuming fire.

Now, regarding light and darkness, I have found a passage in scripture that explains why I have not been able to make much progress among the shepherds and sheep of Mystery Babylon.

The following, as I read it, is a prophecy about what Mystery Babylon will do at the time of the two witnesses, who will not only speak with the voice of God but will also attempt to correct this world that has fallen away, into apostasy.

Woe to her that is filthy and polluted, to the oppressing city! She obeyed not the voice; she received not correction; she trusted not in the LORD; she drew not near to her God. Her princes within her are roaring lions; her judges are evening wolves; they gnaw not the bones till the morrow. Her prophets are light and treacherous persons: her priests have polluted the sanctuary, they have done violence to the law.

Suffice it to say for now that “her princes” or ministering angels are “roaring lions”, walking about seeking whom they may devour (ref. 1 Peter 5:8), and “her judges” are “wolves” in sheep’s clothing (ref. Matthew 7:15).

Darkness has covered the earth (ref. Isaiah 60:2) because of treachery (ref. Zephaniah 3:4, Isaiah 24:16). The confusion, the nonsense, the spin, the brainwashing – it all adds up.

I said, Surely thou wilt fear me, thou wilt receive instruction; so their dwelling should not be cut off, howsoever I punished them: but they rose early, and corrupted all their doings. Therefore wait ye upon me, saith the LORD, until the day that I rise up to the prey: for my determination is to gather the nations, that I may assemble the kingdoms, to pour upon them mine indignation, even all my fierce anger: for all the earth shall be devoured with the fire of my jealousy.

In time, this unrepentant world will face the wrath of God. In time, there will be brimstone and fire.

1. Jamie Carter (26 May 2021), “In Photos: Second-Shortest ‘Blood Moon’ Of The Century Dazzles World And Sets Up ‘Ring Of Fire’ Eclipse Of The Sun”, forbes.com