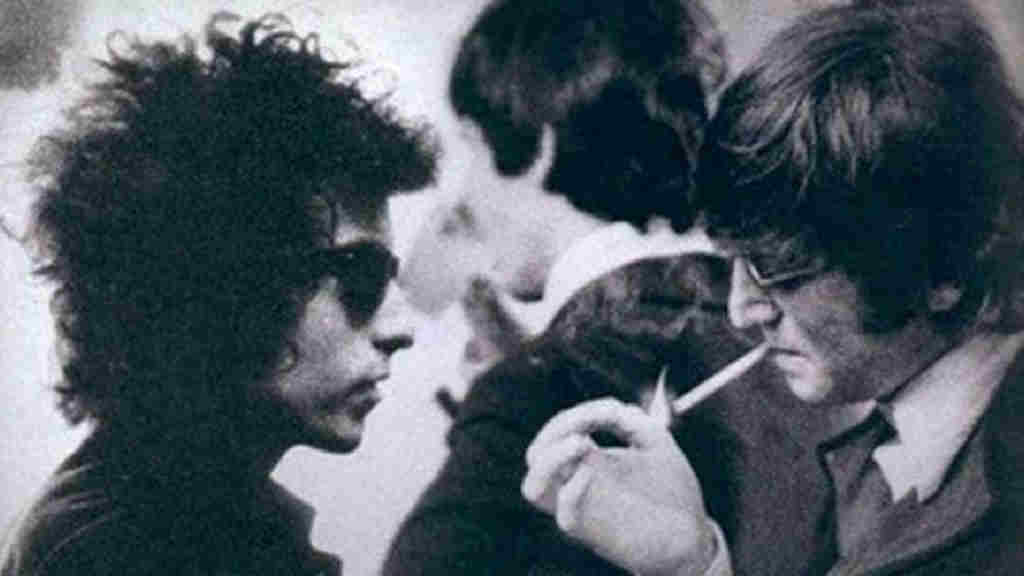 It is said, Bob Dylan introduced the Beatles to marijuana when the Beatles were in New York in 1964 (ref. 1). Also called the devil’s lettuce, the mind-altering drug apparently transformed their music. Subsequently, in 1966, John Lennon remarked that the Beatles had become more popular than Jesus: “Christianity will go. It will vanish and shrink. I needn’t argue about that; I’m right and I’ll be proved right. We’re more popular than Jesus now” (ref. 2). By that time, the Anglican church, which once regarded the King James Bible 1611, and the 1769 re-spelling, as authoritative and proper, had gone way off track. Though Jesuit intrigue was partly to blame, the Beatles played a significant role in transforming the fabric of British society in the 1960s. This is the same Beatles that in 1967 put on the cover of one of their psychedelic albums an image of Aleister Crowley, an avowed Satanist who told his followers, “Do what thou wilt shall be the whole of the law”.

What is more, Dylan once admitted on TV that he had made a “bargain” a long time ago with the “chief commander” to get where he is now (ref. 3). The expression “chief commander”, of course, brings to mind Satan, the one that commands “the host of heaven” that is in rebellion against God (ref. Deuteronomy 17:3). The captain of the host of heaven that is on the side of God is the archangel Michael. He would not make any such bargain.

With all that in mind, let’s examine the lyrics of Bob Dylan’s 1967 song “All Along the Watchtower”, which is something I only noticed a few days ago, never having heard this version of the song before.

“‘There must be some way out of here’
Said the joker to the thief
‘There’s too much confusion
I can’t get no relief
Businessmen, they drink my wine
Plowmen dig my earth
None of them along the line
Know what any of it is worth’

‘No reason to get excited’
The thief, he kindly spoke
‘There are many here among us
Who feel that life is but a joke
But you and I, we’ve been through that
And this is not our fate
So let us not talk falsely now
The hour is getting late’

All along the watchtower
Princes kept the view
While all the women came and went
Barefoot servants too
Outside, in the distance
A wildcat did growl
Two riders were approaching
The wind began to howl”

Some people say, this song is biblical. It sings of Isaiah 21 and Babylon. I agree.

One American commentator, who esteems Dylan, has remarked that the identities of the joker and the thief escape him. He feels that something profound is being said in the song, but is not sure what exactly is being said. He once heard that the joker is Jesus (ref. 4).

So, here, I think I must retort, and settle the matter, for the record.

First, about the “watchtower” and the “two riders” and also the “wildcat”: all this clearly points to the end of Mystery Babylon in Isaiah 21.

Prepare the table, watch in the watchtower, eat, drink: arise, ye princes, and anoint the shield. For thus hath the Lord said unto me, Go, set a watchman, let him declare what he seeth. And he saw a chariot with a couple of horsemen, a chariot of asses, and a chariot of camels; and he hearkened diligently with much heed: And he cried, A lion: My lord, I stand continually upon the watchtower in the daytime, and I am set in my ward whole nights: And behold, here cometh a chariot of men, with a couple of horsemen. And he answered and said, Babylon is fallen, is fallen; and all the graven images of her gods he hath broken unto the ground.

On the day of the LORD, Mystery Babylon, the spiritual harlot that now reigns over the world, will be utterly destroyed (ref. Revelation 18:8, Isaiah 13:5, etc).

Next, a “prince” in biblical nomenclature is an angel. Daniel 9:26 speaks of “the prince that shall come”, meaning Satan. Daniel 12:1 describes the archangel Michael as “the great prince”.

So, the princes that kept the view all along the watchtower must be fallen angels, otherwise known as demons – and I will say they are fallen angels rather than angels of God despite Isaiah 21:5 because that is the only way the entire song makes sense.

Since the thief knows that the hour is getting late, the joker and the thief must be two of these demons that are watching things.

To those who might say the joker is Satan and the thief is Jesus, because Jesus is described in 1 Thessalonians 5:2, for example, as “a thief in the night”, I should like to point out that at some point before the conversation of the song both the joker and the thief have talked falsely: “So let us not talk falsely now”. Because the two have talked falsely and in so doing spread confusion, God cannot be one of them because “God is not the author of confusion” (ref. 1 Corinthians 14:33).

Behold, I come as a thief. Blessed is he that watcheth…

In John 10:1, Jesus explains that the adversary “is a thief”, and by contrast describes himself as “the shepherd”.

Here, regarding the sheepfold, “thief” is meant as someone that is taking away the sheep, and leading them astray. Here, the thief is none other than Satan.

The very idea that “the thief” in the song might be regarded by some as God rather than Satan is deliberate. Indeed, this is precisely an example of the “confusion” that the song celebrates.

For maximum impact, Dylan even used a King James Bible when he was completing the lyrics of the song (ref. 4). Accordingly, every line and every word of the song is deliberate and calculated.

Next, the joker is enjoying the confusion that he has achieved by talking falsely, and what is more, he cannot stop laughing about it: “Said the joker to the thief ‘There’s too much confusion. I can’t get no relief’.”

He goes on, “Businessmen, they drink my wine. Plowmen dig my earth. None of them along the line Know what any of it is worth.” What is meant here is that all of the money and riches that the demons have given to their minions in Babylon, both businessmen and ploughmen, the latter meaning the false teachers of Christianity including the prosperity gospel types (ref. Zechariah 5:4) – all of that – will be nought on the day and hour of judgement.

For in one hour so great riches is come to nought. And every shipmaster, and all the company in ships, and sailors, and as many as trade by sea, stood afar off, And cried when they saw the smoke of her burning, saying, What city is like unto this great city!

This is the joke!

Now to the first line of the song.

The song begins with joker saying to the thief, “There must be some way out of here”. To that, the thief replies, “No reason to get excited” because “There are many here among us Who feel that life is but a joke”.

This begs the question: Why does the joker want to get out of Babylon?

Well, in Revelation 18:2, it is mentioned that Babylon will become a “cage of every unclean and hateful bird”. In other words, on the day of the LORD, the devils that inhabit the land of Babylon will be trapped there, presumably by an act of God, until the second end of the world (ref. 2 Peter 3:10).

To this point, in Isaiah 13:19-21, after Babylon is destroyed as when God overthrew Sodom and Gomorrah, and the land is never again inhabited from generation to generation, “owls” shall dwell there, and “satyrs” shall dance there, and “dragons” too.

And Babylon, the glory of kingdoms, the beauty of the Chaldees’ excellency, shall be as when God overthrew Sodom and Gomorrah. It shall never be inhabited, neither shall it be dwelt in from generation to generation: neither shall the Arabian pitch tent there; neither shall the shepherds make their fold there. But wild beasts of the desert shall lie there; and their houses shall be full of doleful creatures; and owls shall dwell there, and satyrs shall dance there. And the wild beasts of the islands shall cry in their desolate houses, and dragons in their pleasant palaces: and her time is near to come, and her days shall not be prolonged.

So, the joker wants to get out, and the thief also. Both do not want to end up like the other demons of Babylon. This is clear from the lines that come next: “But you and I, we’ve been through that. And this is not our fate.”

For those who still don’t realise it, biblically, Mystery Babylon is the land of “confusion” (ref. Isaiah 24:10). So, if the two demons, the joker and the thief, were to remain in Babylon and be there on the day of the LORD, they would carry on talking falsely, spreading confusion, like the rest. This explains the following lines: “So let us not talk falsely now. The hour is getting late.”

Finally, there is this part in the song: “While all the women came and went. Barefoot servants too.” This, I think, is a reference to women and perhaps Christian-like servants that came to the watchtower and watched for a short while but then went away. These people will not escape the destruction that will come, for they are not truly the children of light.

For when they shall say, Peace and safety; then sudden destruction cometh upon them, as travail upon a woman with child; and they shall not escape. But ye, brethren are not in darkness, that that day should overtake you as a thief. Ye are the children of light, and the children of day: we are not of the night, nor of darkness. Therefore let us not sleep, as do others; but let us watch and be sober.

Apparently, the ones who are keeping the view constantly are the princes – the demons. According to the song, they are all along the watchtower!

Now, it is arguable whether there are two specific demons, a joker and a thief, that are plotting their escape from Babylon before it is too late, or whether the whole thing is actually a joke intended to mock people in Babylon who profess to be Christian but haven’t the faintest idea what is about to happen, or whether it is all some kind of occult message.

The reason I think that it might be a joke or some kind of occult message is because I have come across on Youtube a clip from Fox’s “Lucifer”, which is a TV series I have not watched and I don’t know much about. In this clip, the protagonist of the show, Lucifer – yes, the same Lucifer of Isaiah 14:12, also known as Satan – actually sings this Bob Dylan song as if to be clear that “All Along the Watchtower” is a message from the devil (ref. 5).

1. Gideon Plotnicki (28 August 2020), “Bob Dylan Introduced The Beatles To Cannabis, On This Day In 1964”, liveforlivemusic.com

2. Dave Melamed (4 March 2020), “John Lennon Declared The Beatles To Be More Popular Than Jesus, On This Day In 1966”, liveforlivemusic.com

3. “Bob Dylan sold his soul to the devil”, https://www.youtube.com/watch?v=_vOJ-UoZ7uo, youtube.com

5. “Lucifer playing All Along the Watchtower”, https://www.youtube.com/watch?v=SFDOSIecALU, youtube.com