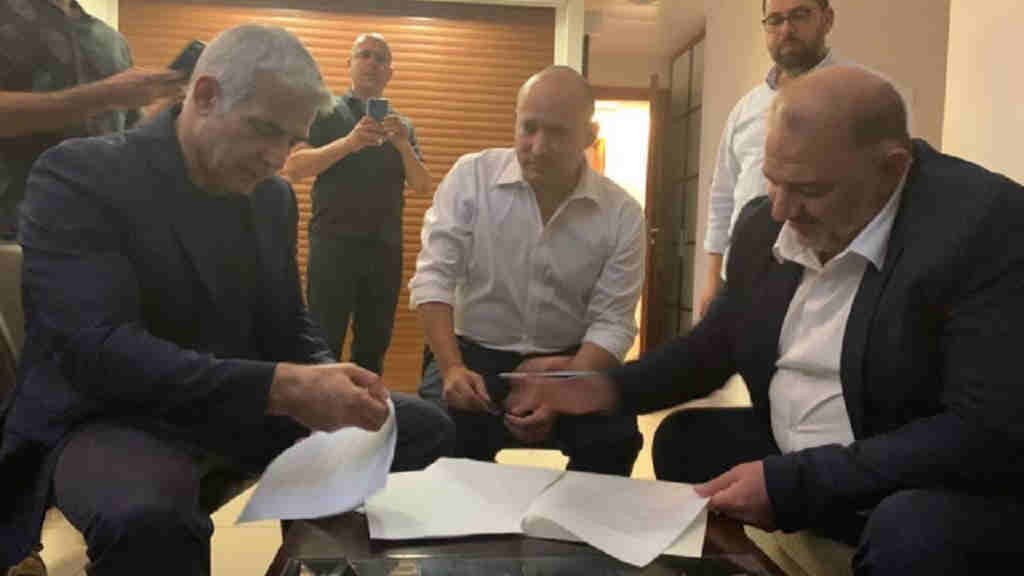 A short while ago, before the deadline of midnight 2 June, at a hotel near the airport of Ben Gurion, Yair Lapid and Naftali Bennett managed to secure the agreement of Mansour Abbas of Ra’am, which gives the coalition of Lapid and Bennett enough votes in the Knesset to form a government (ref. 1). Even the last-minute dispute between Ayelet Shaked of Yamina and Merav Michaeli of Labor, over Israel’s Judicial Selection Committee, has been resolved with a rotation agreement (ref. 1). As a result, soon Israel will have a new government, and Benjamin Netanyahu will no longer be the prime minister.

This is a unity government that spans the right, the centre, and the left. Israel is to be unified, because a house divided against itself cannot stand (ref. Matthew 12:25).

Though Bennett announced that he would do this deal with Lapid a few days ago (ref. 2), after having changed his mind during the Gaza war, I was not prepared to call it until now because Ra’am, or the United Arab List, which is an Islamist political party, was always in a position to spoil the investiture vote.

Today, Lapid and Bennett have secured the promise and signature of Abbas to support the new coalition. The historical moment was not lost on Abbas when he told reporters, “This is the first time an Arab party is a partner in the formation of a government” (ref. 3). Ra’am had not sought any cabinet positions but merely economic and social concessions.

And Jesus looking upon them saith, With men it is impossible, but not with God: for with God all things are possible.

Indeed, the security cabinet will even have a right-wing majority (ref. 4)! Nowadays, to be left-wing in Israel is to sympathise too much with the cause of a Palestinian state.

About the security cabinet of the forthcoming government, notice that the prime minister, the religious affairs minister, and the interior security minister, and maybe others as well, all served in Sayeret Matkal before they entered politics. Sayeret Matkal is the IDF’s foremost military intelligence and special forces unit, trained to operate behind enemy lines, carrying out reconnaissance and also counter-terrorism and hostage rescue. “The Unit”, as it is sometimes known, is modelled after the British Army’s SAS, whose motto is “Who Dares, Wins”.

As you can see, Israel is being prepared for the next step, which is the temple of God, on the Temple Mount.

For the longest time, Benjamin Netanyahu has insisted on maintaining the status quo of no Jewish prayer on the Temple Mount (ref. 5). Even the previous US administration of Donald Trump, which many American evangelicals favour, insisted on Jewish prayer at the Western Wall and the status quo on the Temple Mount (ref. 6). Only Jewish Home and more recently Yamina have challenged Netanyahu on this matter, in particular Ayelet Shaked (ref. 7) who is currently the deputy leader of Yamina.

So now, behold, the next prime minister of Israel is the leader of Yamina.

The Bible is clear. At the appointed time, there must be a temple of God and a daily sacrifice to God, no matter what the world thinks.

In this time of the end, Israel must turn to God, in the manner that it is accustomed to.

To prepare the way, God will send to Jerusalem the two witnesses, Elijah and John.

Behold, I will send my messenger, and he shall prepare the way before me: and the Lord, whom ye seek, shall suddenly come to his temple, even the messenger of the covenant, whom ye delight in: behold, he shall come, saith the LORD of hosts. But who may abide the day of his coming? and who shall stand when he appeareth? for he is like a refiner’s fire, and like a fullers’ soap: And he shall sit as a refiner and purifier of silver: and he shall purify the sons of Levi, and purge them as gold and silver, that they may offer unto the LORD an offering in righteousness. Then shall the offering of Judah and Jerusalem be pleasant unto the LORD, as in the days of old, and as in former years.

And there was given me a reed like unto a rod: and the angel stood saying, Rise, and measure the temple of God, and the altar, and them that worship therein. But the court which is without the temple leave out, and measure it not; for it is given unto the Gentiles: and the holy city shall they tread under foot forty and two months. And I will give power unto my two witnesses, and they shall prophesy a thousand two hundred and threescore days, clothed in sackcloth.

Once the temple is ready, the spirit of God, the LORD himself, will enter into the temple (ref. Malachi 3:1).

Now, notice, Lapid is a secular Israeli, yet his first name is “Yair”, which means “He will light”. I gather, this is because before he became a politician, Lapid was a journalist. I think, Israel is to have a prime minister who is skilled in the news because one of the tasks ahead is to ensure that the message of the two witnesses reach the entire world. Remember, the commission of the two witnesses is to preach the gospel of the kingdom of God (ref. Revelation 11:9, Revelation 14:6, Matthew 24:14).

And I saw another angel flying in the midst of heaven, having the everlasting gospel to preach unto them that dwell on the earth, and to every nation, and kindred, and tongue, and people

And this gospel of the kingdom shall be preached in all the world for a witness unto all nations; and then shall the end come.

The two witnesses will even have the power to smite the earth as often as they will in order to garner the attention of the world (ref. Revelation 11:6), a world that has fallen away and is now enveloped by darkness.

And when their testimony is over, their death and resurrection (ref. Revelation 11:7-12) will prove to this world the truth of the resurrection of the Son of man.

But if there be no resurrection of the dead, then is Christ not risen: And if Christ be not risen, then is our preaching vain, and your faith is also vain… But now is Christ risen from the dead, and become the firstfruits of them that slept. For since by man came death, by man came also the resurrection of the dead. For as in Adam all die, even so in Christ shall all be made alive.

After all, for some, seeing is believing.

4. Times of Israel (31 May 2021), “Planned Lapid-Bennett security cabinet would have right-wing majority”, timesofisrael.com