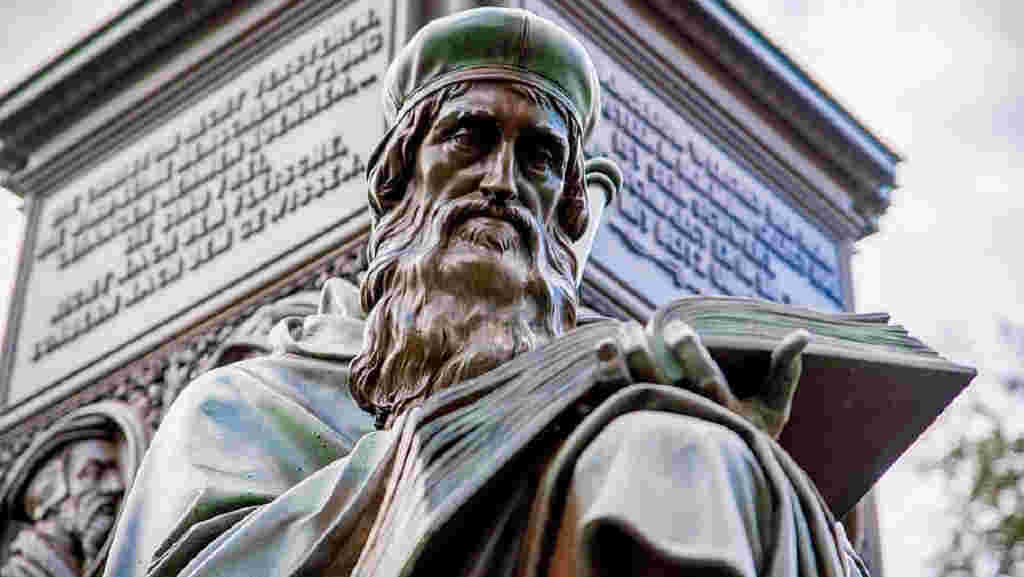 In the city of Worms in Germany, there is a monument to the Protestant Reformation, which includes Peter Waldo of France, Jan Hus of Bohemia, and John Wycliffe of England. But standing above them all is Martin Luther of Germany. Luther was famously called to the assembly of Worms in 1521 by the Roman Catholic Church to answer the charges against him of heresy, for forty-one of his ninety-five theses. History remembers Martin Luther (1483-1546) as the one who started the Protestant Reformation. Yet credit for it all must go to John Wycliffe (1328-1384). Luther and also Jan Hus (1369-1415) owe their ideas to Wycliffe, even the notion that the practice of indulgence was a doctrine and commandment of men rather than of God. Even the criticism of Ulrich Zwingli (1484-1531) against the doctrine of transubstantiation was first made by Wycliffe.

John Wycliffe was a teacher at Oxford University, and also a rector and priest of Lutterworth. Wycliffe was the first of the “Bible-men”, someone who considered the Word of God and the Gospel more important than any ceremony or tradition of Christendom. What Wycliffe sought to do was provide a Bible in the vernacular so that everyone could read scripture, not merely the privileged clergy who were schooled in Latin. He had the right idea but not the proper source material. Wycliffe translated the Bible from Latin to Middle English. Since the Latin had long been corrupted, Wycliffe’s Bible was not altogether correct.

It would take the fall of Constantinople in 1453, which brought long-forgotten Greek manuscripts of the New Testament to Europe, and also the scholarly brilliance of Desiderius Erasmus (1466-1536) of Rotterdam, to produce the Textus Receptus, the foundation of a correct New Testament. As for the Old Testament, Jews have long preserved the accuracy of the Masoretic Text.

When Thomas Linacre (1460-1524), a teacher at Oxford who taught Erasmus, read the New Testament in Greek for the first time, he famously said, “Either this is not the Gospel, or we are not Christians!” In 1526, William Tyndale (1494-1536) stood on the shoulder of Wycliffe, and completed an English translation of the Textus Receptus of Erasmus. For his work, Tyndale was burnt at the stake as a heretic by the Catholic Church. With his dying breath, Tyndale prayed to God that he would open the eyes of the king of England. Tyndale was executed a few years after Henry VIII had married Anne Boleyn. The offspring of that marriage, Elizabeth I, made England firmly Protestant, defeating even the Catholic and mighty Spanish Armada of 1588 despite the odds: “Flavit et Dissipati Sunt”, “He blew with his winds, and they were scattered”. And so in 1611, and by the authority of King James I of the United Kingdom, a Presbyterian by upbringing, and with the help of the Puritans and the Anglicans of England, the work that Wycliffe had started was completed. In 1769, the KJV was re-spelt to suit modern English. So, today, the Word of God is available in the English language.

Now, behold, one of the consequences of the Second Vatican Council, or Vatican II, 1962-65, is that the sermon or homily of a mass must henceforth be in the vernacular rather than in Latin. This is precisely what Wycliffe and Tyndale had asked for. So, in the end, which of the two sides prevailed? Catholics or Protestants?

Wycliffe died of a stroke, as did Luther.

About Martin Luther, it should be remembered that he once described James as “an epistle of straw” because the writings of James contradicted Luther’s own theology. This is dangerously close to, if not precisely, blasphemy against the Holy Ghost, an unforgivable offence (ref. Matthew 12:31-32).

Luther even wanted to downgrade the status of Revelation, putting it among “disputed books”, simply because he could not understand Revelation.

For I testify unto every man that heareth the words of the prophecy of this book, If any man shall add unto these things, God shall add unto him the plagues that are written in this book: And if any man shall take away from the words of the book of this prophecy, God shall take away his part out of the book of life, and out of the holy city, and from the things which are written in this book.

Though Luther was not burnt at the stake, Tyndale was.

Tyndale of England was a true martyr of Jesus Christ.

Likewise, the followers of Wycliffe, in England during the 14th and 15th centuries, were also persecuted and burnt at the stake by the Catholic Church. Wycliffe’s followers, gathered mostly from among the poor, were derogatorily called Lollards.

One century before Wycliffe, Peter Waldo (1140-1218) of Lyon, in France, started a movement that history remembers as the Waldensians. This group also rejected the Catholic doctrines of indulgences and transubstantiation, and even purgatory. As such, it could be said that the seeds of the Protestant Reformation were sown as early as the 12th century. Like the Lollards after them, the Waldensians were mostly poor. Indeed, they were sometimes known as the “Poor Men of Lyon”. Incidentally, “lyon” is French for “lion”, and curiously for some reason can also be spelt in Old French as “lian”.

Among the saints, or future “priests and kings” of Christ, will be the rich and the poor.

The LORD maketh poor, and maketh rich: he bringeth low, and lifteth up. He raiseth up the poor out of the dust, and lifteth up the beggar from the dunghill, to set them among princes, and to make them inherit the throne of glory: for the pillars of the earth are the LORD’s, and he hath set the world upon them. He will keep the feet of his saints, and the wicked shall be silent in darkness; for by strength shall no man prevail.

One famous Lollard that was rich was a contemporary of Henry V, king of England. John Oldcastle was a boon companion, or drinking buddy, of Prince Hal, before Prince Hal was crowned Henry V. On many occasions, they both got sloshed together. William Shakespeare’s fictional character John Falstaff was based on him.

In the 2019 Netflix movie “The King”, John Falstaff is said to have been killed at Agincourt. Historically, this was not so.

The Lollard rebellion of 1414 could not succeed because the Textus Receptus was not yet ready.

Furthermore, the rebellion of 1414 was not in sync with the will of God, the LORD of hosts. You see, England, through Henry V and technology of the English longbow, was to punish France at Agincourt one year later. Agincourt (1415) together with Poitiers (1356) and also Crécy (1346) had to systematically cut down the knights of France, for among them were the Templars and their kind that had escaped the wrath of King Philip IV of France (1268-1314) – the same Templar organisation of Isaiah 23, the knights who secretly became Satanists when they were in Jerusalem at Al Aqsa mosque.

Historical accuracy aside, I must say, there is something about the trailer of Netflix’s The King that stirs the soul.

Hal is somebody suddenly given a “crown”, called to be king.

Anyway, Hal who becomes Henry V in The King remarks, “Know now you will be watched over by an altogether different king” (ref. 1).

Why is this noteworthy?

Well, Psalms 2 suggests that God’s “marvellous work” against evil will not end completely on the day of the LORD. To be sure, the work will be over in the holy land (ref. Isaiah 29:14), but elsewhere in the distant parts of the earth there will be further to do. Elsewhere, among the former allies of the beast of the earth, for instance, the heathen will “rage” and conspire, and the people will “imagine a vain thing” to break the bands or cords of God (ref. Psalms 2).

Consequently, Jesus Christ will break the conspirators with “a rod of iron” (ref. Psalms 2:9, Revelation 12:5).

And she brought forth a man child, who was to rule all nations with a rod of iron: and her child was caught up unto God, and to his throne.

And out of his mouth goeth a sharp sword, that with it he should smite the nations: and he shall rule them with a rod of iron: and he treadeth the winepress of the fierceness and wrath of Almighty God.

The “priests and kings” of Christ, or priests ordained with kingly power (ref. 1), will do this work, even to the point of judging the demons among the people of the nations (ref. Revelation 2:26-27, 1 Corinthians 6:3).

And he that overcometh, and keepeth my works unto the end, to him will I give power over the nations: And he shall rule them with a rod of iron; as the vessels of a potter shall they be broken to shivers: even as I received of my Father.