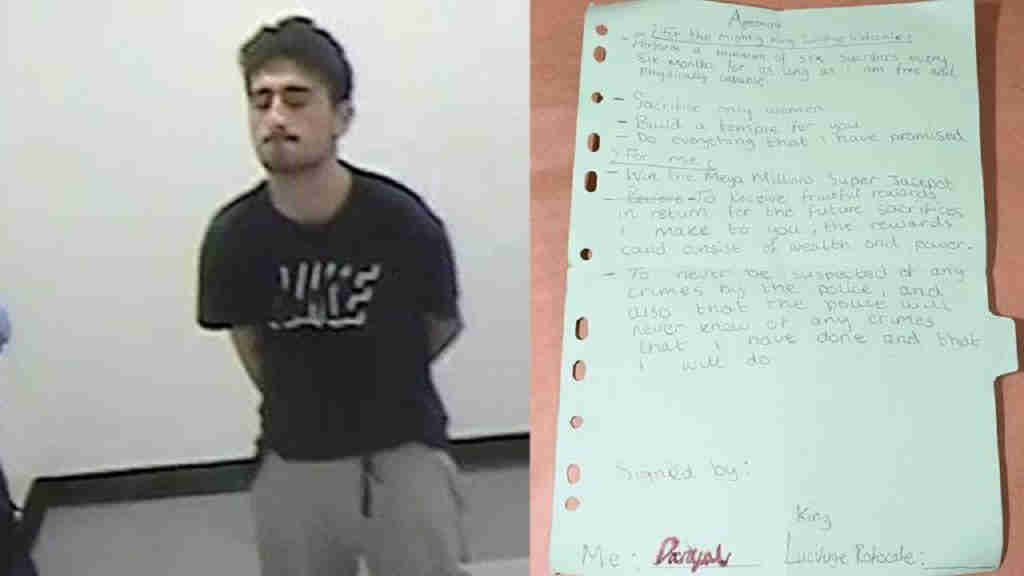 Last year, at a park in London UK, Danyal Hussein repeatedly stabbed two sisters with a knife and killed both of them (ref. 1). The two women were daughters of a former Anglican archdeacon (ref. 2). Danyal Hussein’s case is now before a court, and evidence has been presented to the court that this nineteen-year-old teenager made a pact with the devil to sacrifice a minimum of “six women every six months” in exchange for winning the lottery and also for “wealth and power” (ref. 1). When he was arrested last year, UK police found a written note signed by “Danyal” in blood that detailed the entire agreement. The agreement was made with an entity called “Lucifuge Rofocale”. Police also found three lottery tickets and the knife.

This case is illustrative of what demons do. Again for those who do not know, demons are angels that are in rebellion against God. All demons serve the Devil, also known as Satan, and Lucifer. Demons kill and destroy and cause souls to be damned. Angels, by contrast, are messengers of God, and they do the work of God.

Usually, someone that makes a pact with a demon has either consumed a mind-altering drug, or else carried out a seance or something like that.

Danyal Hussein told police that he is autistic – that he has Asperger’s syndrome. I suppose, some individuals with weaker minds can be susceptible to demonic influence. It might be like hypnosis and why some persons can be hypnotised while others cannot.

At any rate, this man made a pact, and even signed the pact with literal blood.

There shall not be found among you any one that maketh his son or his daughter to pass through the fire, or that useth divination, or an observer of times, or an enchanter, or a witch, Or a charmer, or a consulter with familiar spirits, or a wizard, or a necromancer. For all that do these things are an abomination unto the LORD…

Luckily, this man was found out, and was not able to continue as a serial killer.

And they shall no more offer their sacrifices unto devils, after whom they have gone a whoring…

The serial killer Richard Ramirez, known as “The Night Stalker”, who terrorised Los Angeles USA, was a satanist (ref. 3). He painted pentagrams on walls, and told one of his victims to “swear upon Satan”.

Likewise, the serial killer David Berkowitz, known as “The Son of Sam”, who terrorised New York USA, was a satanist (ref. 4). He started his killing spree after he had heard the voice of a demon from a dog called Sam. Furthermore, he belonged to a satanic cult that would gather in an abandoned building and carry out blood sacrifice rituals using animals. An investigative journalist Maurice Terry researched the case and wrote about it in his book, “The Ultimate Evil”.

Other serial killers who were satanists include Jack the Ripper, Charles Manson, Ted Bundy, Jeffrey Dahmer, and so on.

Now, I have shown you the evil that a demon might do by controlling one person or a small group of people.

Imagine the evil that tens of thousands of these creatures might do when they control vast armies, nations and even an empire.

… Woe to the inhabiters of the earth and of the sea! for the devil is come down unto you, having great wrath, because he knoweth that he hath but a short time.

You see, this coming world war will be like nothing the world has ever experienced.

But no matter how many the enemy might be, the fact of the matter is that angels outnumber demons two to one. And furthermore, God himself will fight this war against evil, both as the LORD of hosts and in person.

… Now is come salvation, and strength, and the kingdom of our God, and the power of his Christ…

1. James Gant and Duncan Gardham and Jocob Thorburn (11 June 2021), “Blood-signed pact teenager, 19, made with devil before he stabbed sisters to death in park after offering to sacrifice six women every six months, shown to murder trial”, dailymail.co.uk

3. “Night Stalker: The Hunt For a Serial Killer”, https://www.youtube.com/watch?v=Mva2nGveYss, youtube.com

4. “The Sons of Sam: A Descent Into Darkness”, https://www.youtube.com/watch?v=ICFZ1wS8Fuc, youtube.com