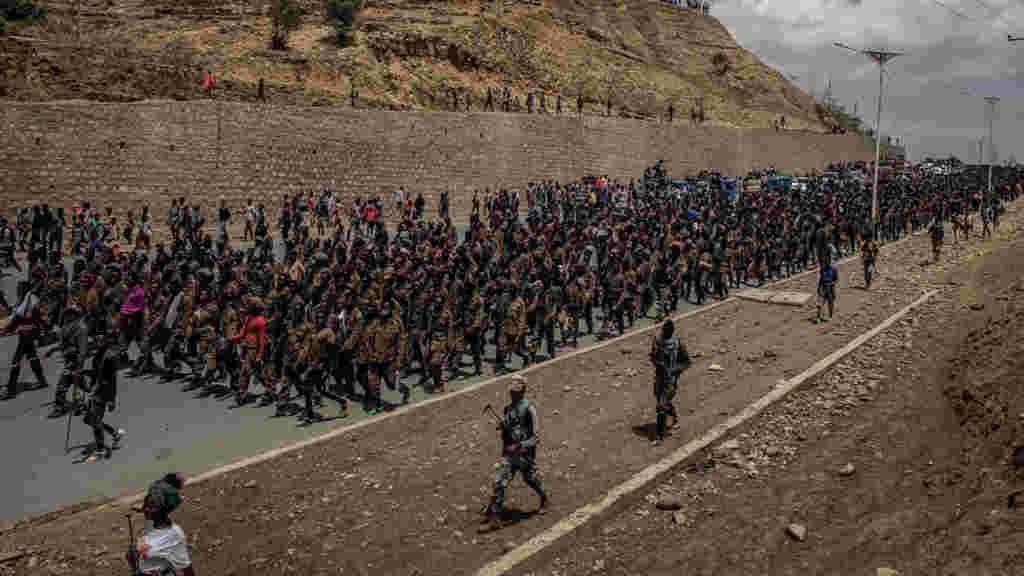 Last Friday, Tigray held a victory parade. Some six thousand captured Ethiopian government soldiers were marched through downtown Mekelle while under guard by TPLF fighters (ref. 1). The residents of Mekelle were on the streets jubilant, cheering the TPLF and jeering the captives.

The parade of prisoners of war was meant to rebuke and humble Prime Minister Abiy Ahmed Ali, who had insisted that the defeat of his troops was a lie.

One fourteen-year-old, Mearge Gebroemedhin, ran alongside the column, shouting her admiration for Debretsion Gebremichael, calling him a “lion” (ref. 1). “All these soldiers tried to kill us”, she said, “but the Tigrayan soldiers showed their mercy. I am proud of our soldiers.”

Other onlookers could not contain their anger for Abiy and his forces, shouting “Abiy is a thief!”

This civil war has displaced nearly two million people. There have been atrocities against civilians, summary executions, mass rapes, incidents of extortion, unnecessary damage to property, and even deliberate crop destruction. Over four hundred thousand people in Tigray are now in a state of famine, and another two million or so are on the brink, according to the UN (ref. 2).

The New York Times managed to obtain an exclusive interview with Debretsion Gebremichael, the leader of the TPLF and the former deputy prime minister of Ethiopia (ref. 3). Debretsion Gebremichael emerged from his holdout in the mountains to give his first interview since the re-capture of Mekelle. “I didn’t expect to make it back alive”, he said. “But this isn’t personal. The most important thing is that my people are free.”

According to Debretsion, seven of the twelve divisions of the Ethiopian army have been defeated, and at least eighteen thousand of Abiy’s soldiers have been killed and some six thousand have been captured (ref. 3). According to the Ethiopian federal government, around fifty thousand Ethiopian soldiers were deployed to Tigray, and a considerable number – a convoy of between two and three thousand vehicles – has since left Tigray (ref. 4). To put things into context, in 2017, the strength of the entire Ethiopian National Defence Force was said to be one hundred and thirty-eight thousand, but that number included Tigrayans of the TPLF.

Whatever the actual figures may be, certainly, there is no denying that the TPLF has been victorious in this first round of the conflict.

Despite international calls for a ceasefire, the TPLF intends to fight on, and plans to expel all foreign forces from Tigray including ethnic Amhara militias and the Eritrean army. “They have taken the land by force, so we will take it back by force.”

Debretsion also revealed that early on in the civil war, drone strikes were carried out by the United Arab Emirates against the TPLF’s artillery and supply lines. That barrage of drone strikes caught the TPLF off guard and put them on the back foot. “Without the drones, the fight would have been different.”

As I see it, the UAE is beholden to Allah. Being governed by Sharia law, the UAE is by no means moderate. It is only because of America’s Donald Trump that the UAE has managed to trick Israel.

About Eritrea, despite earlier talk of the TPLF marching to Asmara, Debretsion said, his forces will push the Eritreans across the border but not necessarily go further. “We have to be realistic. Yes, we would like to remove Isaias. But at the end of the day, Eritreans have to remove him.”

Now, months ago, I pointed out that the name of the leader of the TPLF is interesting. “Debretsion” means “Mount Zion”. And “Gebremichael” means “Servant of the archangel Michael”.

The name “Michael”, which is of Hebrew origin, means “Who is like God?”

I have since learned two more interesting facts about Debretsion Gebremichael.

Second, he once headed Ethiopia’s power utility, where he oversaw the construction of the Grand Ethiopian Renaissance Dam! This means, I have got it right. In the future, after Egypt falls to the Assyrian, the TPLF will play a role regarding Isaiah 19:6.

And they shall turn the rivers far away; and the brooks of defence shall be emptied and dried up: the reeds and flags shall wither.

Concerning the water flow of the river Nile, the latest is that South Sudan intends to build a new dam to generate hydroelectricity. South Sudan is going to do so with help from China (ref. 5).

Egypt, already upset by the current Ethiopian government’s intention to fill the Grand Renaissance Ethiopian Dam this rainy season, which goes from June to September, was surprised by South Sudan’s plan.