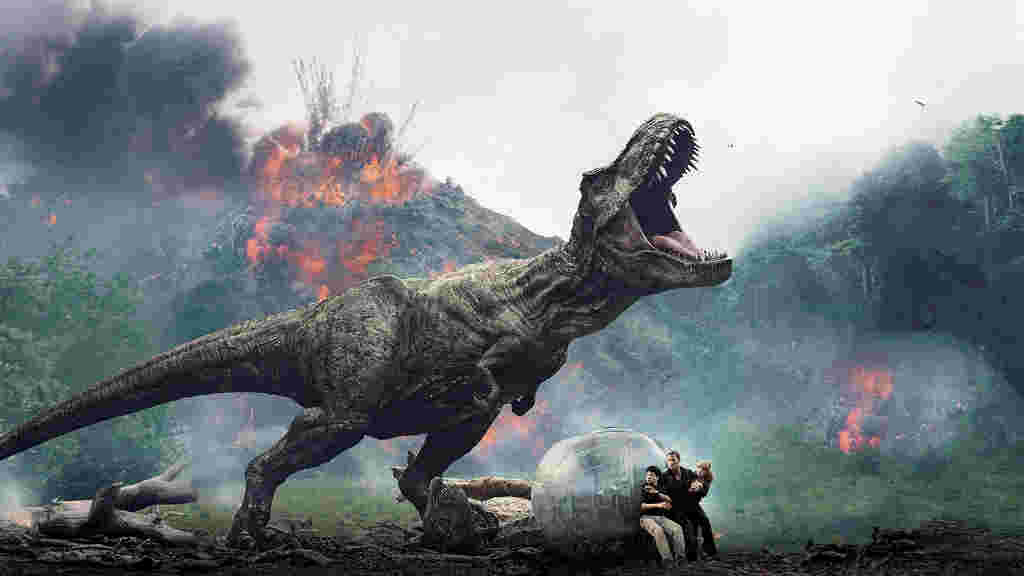 The idea that dinosaurs once roamed this world is a lie. Fossils of dinosaurs are fake! Every dinosaur skeleton you see in a museum is largely plaster, a product of imagination.

Some of these imagined creatures defy logic. Look at the T-Rex. The massive head of the T-Rex is not balanced by the weight of its tail. From a bio-mechanical point of view, a T-Rex would not be able to lunge forward to feed without falling on its face. Indeed, museums must resort to metal frames and supporting ropes to get the skeleton of T-Rex to stand. A T-Rex in the flesh with a stomach would be even worse. A kangaroo, by contrast, has a small head but a large and strong tail. When a kangaroo leans forward to feed, it goes on all four. The T-Rex, however, has puny, seemingly useless hands.

The idea that a cold-blooded reptile akin to a crocodile was once dominant on the earth is from the dragon, also known as Satan. The Greek word for dragon in Revelation 12-13 is “drakon”, which literally means “serpent”. Surely, a serpent that can walk with legs is a satanic fantasy.

And the LORD God said unto the woman, What is this that thou hast done? And the woman said, The serpent beguiled me, and I did eat. And the LORD God said unto the serpent, Because thou hast done this, thou art cursed above all cattle, and above every beast of the field; upon thy belly shalt thou go, and dust shalt thou eat all the days of thy life

By the way, in 2015, a complete fossil of a four-legged snake (ref. 1), described as Tetrapodophis amplectus, was unearthed in Brazil, thereby proving Genesis 3:13-14.

As for dinosaurs, the first so-called dinosaur fossil somebody uncovered was a large tooth (ref. 2). That tooth embedded in rock, and discovered in Sussex UK in 1822, could have been the tooth of any animal, perhaps an iguana.

For the next twenty years, all kinds of purported dinosaur fossils began to mysteriously surface. But always it would be one piece of bone like a thigh bone, or a bone fragment, and never a full skeleton or even a dinosaur-like skull whatever that may be.

Apparently, before the 19th century, no one had ever unearthed a dinosaur fossil.

By the 19th century, the era of the Enlightenment had already dominated the world of ideas. Secret societies of Satanists were on the ascendancy. 1776 and 1789 had both occurred. Britain was no different. The Royal Society, a fellowship established in 1660 that advocated the study of science, began to embrace the likes of Charles Darwin.

The theory of Darwinian evolution is nonsense. The idea that a new species can originate by means of natural selection ​is illogical. I figure this out in 2017. I wrote about it in my book.

Accordingly, the idea that man evolved from ape is impossible. For man to have evolved from ape, at some point, a female ape would have had to birth a man or a woman, the very first of mankind. This first man or woman would then have had to mate with an ape in order to reproduce, simply because he or she was the first of mankind. However, as I have explained, whenever a male of a species mates with the female of another, the offspring will always be sterile. It follows from this that the first man, or woman, in a population of apes, could not have reproduced, to pass on human-like genes to subsequent generations. Therefore, the idea that mankind evolved from apes is nonsense.

And God said, Let us make man in our image, after our likeness: and let them have dominion over the fish of the sea, and over the fowl of the air, and over the cattle, and over all the earth, and over every creeping thing that creepeth upon the earth. So God created man in his own image, in the image of God created he him; male and female created he them. And God blessed them, and God said unto them, Be fruitful, and multiply…

And the LORD God formed man of the dust of the ground, and breathed into his nostrils the breath of life; and man became a living soul.

You see, Darwinian evolution is a lie. It is not science!

The kind of evolution advanced by Richard Dawkins is also not actually science. Phenotypical selection is more conjecture and thought experiment than theory proven by data.

The mistake that John Lennox and the late C S Lewis and others like them make when they try to defend religion from science is not to point out that the science of the other side is plainly wrong.

John Lennox is a professor of mathematics at Oxford. During his debates, his arguments are strong and very logical. After all, maths is logic.

C S Lewis wrote “The Chronicles of Narnia”, an allegory of Christianity for children that is certainly more Christian than J R Tolkien’s “The Lord of the Rings”. In Tolkien’s fantasy, the east is Mordor, and the hero Aragon leads the men of the west.

Neither Lennox nor Lewis has realised that this world has been completely deceived by Satan! They always insist that religion is something beyond science. It has never occurred to them that much of what has been accepted as science is bunk.

Piltdown Man of 1912 was a famous paleoanthropological fraud. In 1953, it was figured out that the fossil was a composite of three distinct species – a human skull from medieval times, the lower jaw of an orangutan, and some teeth of a chimpanzee.

Even the idea that organic matter can be dated scientifically beyond six thousand years is rubbish. And I don’t just say that because the Bible says the universe is some six thousand years old. I say that because the furthest science can actually date something is approximately five thousand, seven hundred and thirty years. Anything beyond that is estimation. That number is the half-life of carbon-14. Radiocarbon dating is possible because carbon-14, which is created by the sun, decays the same way every time.

For that matter, modern astrophysics is also not science. Despite all their complex mathematics and the latest convoluted ideas, physicists are still not closer to figuring out how it all came to be. Theories about a multiverse and whatnot are speculation rather than science. To date, M-Theory cannot be supported by experimental or observable evidence, despite the proclamations of the late Steven Hawking.

Jurassic Park’s premise that dinosaur DNA can survive in the amber of resin-bearing trees is also science fiction.

While amber cannot preserve DNA, ice can. In February 2021, scientists sequenced the DNA of a woolly mammoth that was discovered in Siberia Russia in the 1970s (ref. 3). This means, from now on, any fossil that paleontologists find somewhere frozen, such as Siberia or Antarctica, can be examined through the lens of modern DNA analysis.

Is the jig up?

It may take a while for the fraud of palaeontology to stop. The industry of dinosaur bones carries on because of vested interests. Skeletons whether real or not are selling for millions of dollars across the world. Long ago, it was American tycoons that started it all (ref. 4). Today, it has taken on a life of its own.

There is also the profession of palaeontology. Suppose a person spends seven or eight years of his life obtaining a PhD in dinosaur palaeontology. When he figures out it is bunk, does he pretend and carry on, or does he walk away and start over?

Let me give you another example of a pseudoscience perpetrated by the enemy: psychiatry. The use of mind altering drugs is sorcery. It is no coincidence that Sigmund Freud consumed cocaine and was into the occult. Neither is it a coincidence that Carl Jung was an outright Freemason. The case of the exorcism of Anneliese Michel reveals that an anti-psychotic prescribed by a psychiatrist can bring about the very psychosis that the drug is supposed to alleviate, and as I have said, what psychiatrists call psychosis is actually demonic possession.

I can tell you also that a lot of economics is junk. John Maynard Keynes, for one, was on the other side – a homosexual whose social circle included a sadomasochist, a schizophrenic, and a transgender lesbian. His theories, which the world has embraced, are based on dubious models and deficient data. Modern Monetary Theory, the latest stupidity in economics, is essentially a means by which the Devil enriches the few at the expense of the many. Adam Smith said that wealth is created by aggregate demand, essentially the size of the population.

The rich man’s wealth is his strong city: the destruction of the poor is their poverty.

But the Devil enjoys killing and destroying, which means he cannot enrich his minions by actually creating new wealth. And so his answer is to redistribute wealth: give more to the haves by taking from the have-nots.

You see, as scripture explains, Satan “deceiveth the whole world” (ref. Revelation 12:9)! Therefore, “the wisdom of this world is foolishness with God” (ref. 1 Corinthians 3:19).

In due time, Satan will lose all power, and the world will come to know the truth.

And ye shall know the truth, and the truth shall make you free.

2. Emily Osterloff, “Iguanodon: the teeth that led to a dinosaur discovery”, nhm.ac.uk