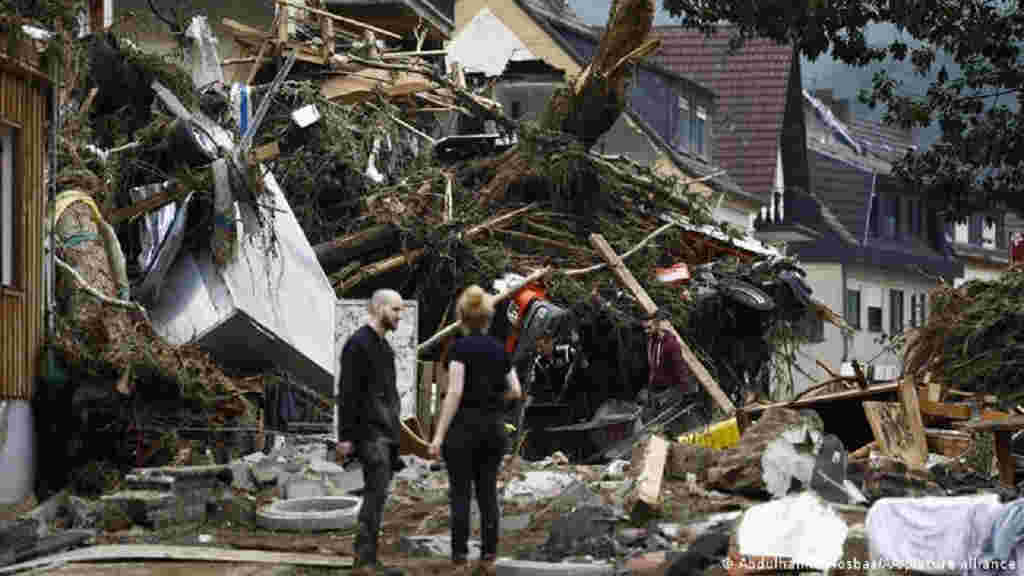 The worst floods to hit Germany in sixty years began on 15 July, the same day that Angela Merkel visited the White House to meet with Joe Biden, to discuss among other things Russia and China. The rain had started the night before (ref. 1). It was heavy and continuous.

By the time the two leaders held a joint press conference and vowed to “work together to defend against Russian aggression and stand up to anti-democratic actions by China” (ref. 2), whatever all that means, the western parts of Germany had started to see flash flooding.

To her credit though, Merkel did resist America’s demand to shut down Nord Stream 2, a gas pipeline from Russia to Germany. Merkel and Biden also disagreed on whether Germany should maintain trade with China.

Merkel’s time as leader of Germany is almost over. She will retire later this year.

It is disappointing to see Merkel, who grew up in East Germany, and who is fluent in Russian, and who purports to lead the Christian Democratic Union, perhaps the only ruling political party in the world that is officially Christian, not be clever enough or brave enough as a politician to do more to put Germany on a surer footing. Merkel happens to be the daughter of a Lutheran pastor, whom once criticised the social order of West Germany, which was and still is infested with CIA and literal Nazis. Her middle name is “Dorothea”, which is Greek for “Gift of God”. I suppose, somewhere and somehow, the enemy got to her and so she did not do for Germany what she was meant to do.

Anyway, there was unusually heavy rain across large parts of western Germany, or West Germany, that night. Nearby Belgium was also affected. The downpour caused rivers to overflow and landslides to occur. The water was sudden and ferocious. Cars, trees and other debris were swept into bridges and buildings. By the time the water receded, several villages had been reduced to rubble, and others were covered in mud. So far, the death toll is at one hundred and eighty-eight (ref. 3). The clean up is estimated to cost in the billions of euros (ref. 4).

“Biblical” is a word that eyewitnesses have used to describe the flood (ref. 3). Merkel, who visited the Ahrweiler area of Germany’s west, said the situation is “terrifying” and “surreal”, adding “the German language doesn’t have words for the destruction that’s been wreaked” (ref. 3).

The latest news is that the district of Bavaria in the south is now being battered by heavy rain (ref. 3). Bavaria Germany happens to be the birthplace of the Illuminati, which was founded in 1776 by the German occultist Adam Weishaupt.

The Devil would have you believe that this event in Germany was a consequence of man-made “climate change”, rather than a sign or a chastisement from God.

When the two witnesses arrive, they will have the power and authority to smite the earth with rain and drought, and all such plagues, as often as they will (ref. Revelation 11:6).

Furthermore, the fourth trumpet and vial will see an angel scorch men with “great heat” and fire (ref. Revelation 16:8), perhaps not unlike the ongoing heatwave in north-western USA that has gone on for the last five weeks (ref. 5) – a heatwave that has produced so far over seventy wildfires.

As I see it, God wants all those whom it may concern to repent from evil before it is too late.

And men were scorched with great heat, and blasphemed the name of God, which hath power over these plagues: and they repented not to give him glory.

From here on out, these signs and chastisements will only become more intense. So intense and frightening that some men’s hearts will even fail.

And there shall be signs in the sun, and in the moon, and in the stars; and upon the earth distress of nations, with perplexity; the sea and the waves roaring; Men’s hearts failing them for fear, and for looking after those things which are coming on the earth: for the powers of heaven shall be shaken.

To give you an idea, before it is over, at least one island nation will slide into the ocean, because of the wrath of God. The death toll will not be in the hundreds but rather in the hundreds of millions. These people deserve their fate. Their ilk did tremendous evil decades ago, and they thought they had gotten away with it.

5. Gina Martinez (17 July 2021), “Western US expected to be hit with fourth heat wave in five weeks: temperatures in Montana LIKELY to hit 106 degrees as wildfires continue to rage”, dailymail.co.uk