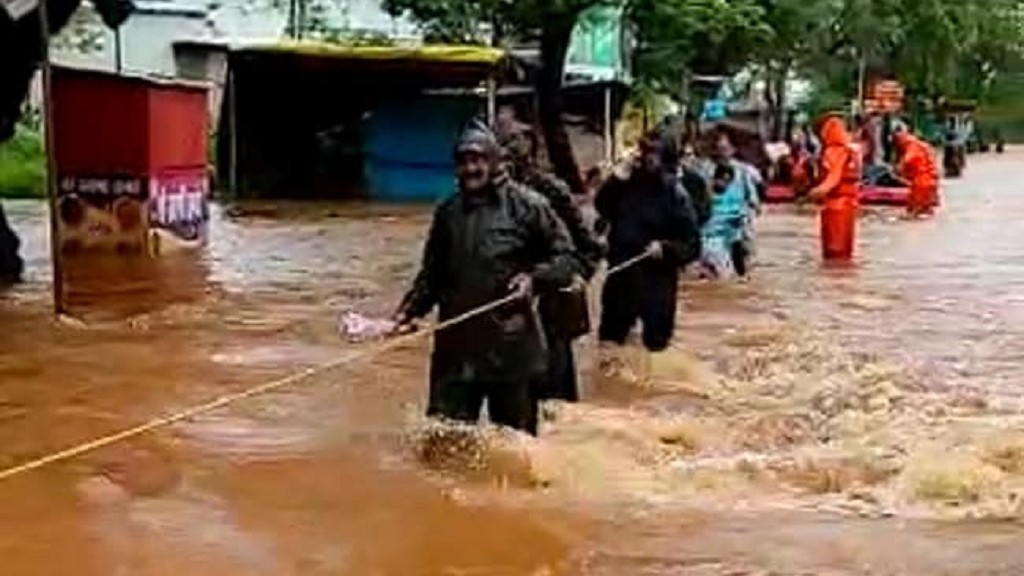 Non-stop rain over the last forty-eight hours has flooded five districts of the state of Maharashtra in India (ref. 1). This is the heaviest rain the area has seen in July in forty years. The rain overflowed several rivers and lakes, caused buildings to collapse, and triggered landslides in at least ten villages (ref. 2). The total death toll at this time is at one hundred and twenty-nine.

A few days ago, it was Germany and Belgium. After that, China. And now, India.

When Zhengzhou in Henan China flooded, I brought up Buddhism because I noticed the history of Henan. Remarkably, Maharashtra also happens to be a place of Buddhism. To be sure, Buddhists make up only six per cent of the population of Maharashtra, but these same people account for some seventy-seven per cent of all Buddhists in India.

Now, check this out. Last Wednesday was the seventieth anniversary of China’s “liberation” of Tibet. On that day, Xi Jinping, the president of China, made a surprise visit to Tibet, the first by a Chinese leader in over thirty years (ref. 3). That two-day visit only made news today.

The flooding of Zhengzhou would have happened around that time, either slightly before or slightly after.

China and India do experience monsoon rains almost every year. From time to time, in both China and India, heavy rains do have disastrous effect, and many people die. But even so, I think what has just happened to India and China, and for that matter Germany, are signs.

And there shall be signs… and upon the earth distress of nations, with perplexity; the sea and the waves roaring;

Besides Buddhists, India is home to Hindus. Hinduism is obviously a polytheistic religion.

Earlier this month, sixteen tourists were killed by a sudden lightning strike as they took selfies on top of a watchtower at Jaipur’s Amer Fort (ref. 4). That twelfth-century fort, in Amer Rajasthan India, is dedicated to the Hindu god Shiva, according to some, or the Hindu goddess Durga, according to others.

The Bible prophesies that in due time the LORD will “famish” all the gods of the earth.

Needless to say, Hinduism will not escape.

Actually, it astonishes me that practising Hindus themselves have not figured out that their religion is evil.

The three main gods of Hinduism are Brahma, Vishnu, and Shiva.

Brahma is supposed to be the creator. Apparently, Indians do not venerate the creator of the universe, so although Brahma is a Hindu god, he is almost never worshipped. There are no temples dedicated to Brahma.

Vishnu is regarded as the preserver and the protector. Most Indians worship Vishnu. It is said, Vishnu appears on earth through animal or human avatars. One of his avatars was Krishna. Another was the Buddha, at least according to Hindus as opposed to Buddhists.

Shiva, whose name in Sanskrit means “Auspicious One”, is known as “the destroyer”, not unlike the Devil described in the Bible.

Though Shiva seems like the Devil to outsiders, he is nevertheless revered by Hindus as a beneficent god. Shiva is the reason why some Indians celebrate death rather than life.

Reincarnation is an idea of Hinduism. Hindus believe things and people must be destroyed in order to be renewed. It has never occurred to them that reincarnation is a lie, and that Shiva is merely into death and destruction.

One of the worst aspects of Hinduism is that every Hindu is born into a social caste, and if a person is born into the lowest caste, a Dalit, it is because that person must have done wrong in a previous life. This thinking means that people in the lowest caste are often treated poorly by people in higher castes for no reason other than the caste system.

Have you seen the video on social media of a Dalit woman in India being beaten by fellow villagers simply because she took water from a well that belonged to a higher caste (ref. 5)?

Clearly, Hinduism is a cruel and an evil religion. The gods of Hinduism enjoy spreading unnecessary suffering because they are in fact wicked spirits, or demons.

The good news is that the days of Hinduism and Hindutva are numbered. The end is coming for the Devil and his lot!