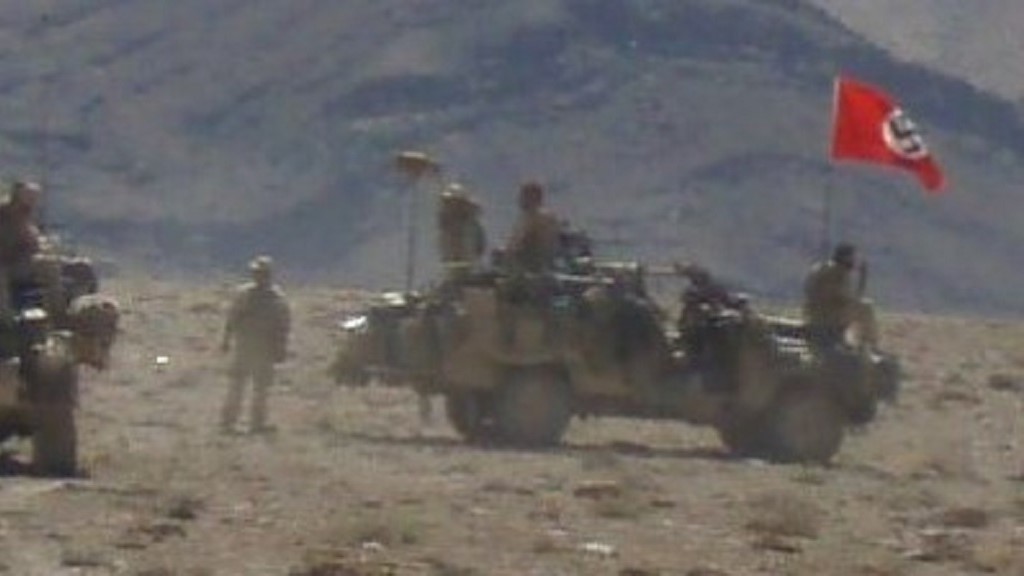 Peter Dutton, Australia’s minister for defence since March 2021, has just likened China’s rise to that of 1930’s Nazi Germany (ref. 1). He claimed Beijing’s rhetoric is “bellicose and coercive”, and he said, the geopolitical climate has “echoes of the 1930s”.

For sure, the idea that China is the new Nazi Germany would have come from fellow Liberal MP Andrew Hastie, who is now the assistant minister for defence. Two years ago, when Hastie was a backbencher, he said the same thing, and it made the news (ref. 2). But back then, many government MPs distanced themselves from Hastie.

Concerning Hastie, it should be said, before politics, he was a captain in Australia’s Special Air Service Regiment, SAS. It is on the record that on one occasion, in 2012, in Afghanistan, soldiers of that regiment were photographed holding up an American Confederate flag (ref. 3). Furthermore, on another occasion, in 2007, in Afghanistan, an Australian army vehicle was photographed flying the flag of a Nazi swastika (ref. 4). The said vehicle was a rover, which suggests SAS. The prime minister at the time, Malcolm Turnbull, said that the diggers’ actions were “absolutely wrong”.

Today, Hastie is no backbencher and no mere MP on the parliamentary joint committee on intelligence and security. Apparently, the sitting prime minister Scott Morrison has quietly promoted Hastie to assistant minister for defence.

Bear in mind, this is the same prime minister who weeks ago described ISIS-K of Afghanistan as “evil”.

So, the Australian government is confused, to say the least.

Actually, to liken China to Nazi Germany is as much a misstep as describing ISIS-K as evil, for a government hell-bent on siding with America in the world war to come.

In Eastern Europe, especially Ukraine, there are actual Neo-Nazis who despise Russia. Russian Foreign Minister Sergei Lavrov recently noted that the ideology of Nazi fascism is on the rise not only in Ukraine but also in Poland and Latvia (ref. 5). Monuments to the Red Army which defeated Hitler in WW2 are being systematically brought down.

Neo-Nazis such as the Azov Battalion of Ukraine would regard Australia’s suggestion that China is the new Nazi Germany as an affront. By contrast, America is actually training if not arming the Neo-Nazis of Ukraine.

During WW2, in the Ukraine, the Einsatzgruppen aided by local fascists, the forefathers of today’s Ukrainian Neo-Nazi movement, sought out, gathered and shot dead millions of Jews. This was before the gas chambers of Hitler’s final solution. So, Ukrainian Neo-Nazis are the real deal.

Earlier this year, Poland made a fuss about the 2013 German TV series “Our Mothers, Our Fathers”, also known as “Generation War”, complaining that it unfairly depicted Polish resistance fighters as anti-semitic (ref. 6). However, the fact of the matter is that now in 2021 Neo-Nazism is on the rise in Poland.

Surely the Neo-Nazis of Europe, the ones that hate Russia and all things red, are the actual Nazis. And surely the side that despises Jews and invades Israel in the war to come, the likes of ISIS, are the modern-day equivalent of Nazis.

Proclaim ye this among the Gentiles; Prepare war, wake up the mighty men, let all the men of war draw near; let them come up: Beat your ploughshares into swords, and your pruninghooks into spears: let the weak say, I am strong. Assemble yourselves, and come, all ye heathen, and gather yourselves together round about: thither cause thy mighty ones to come down, O LORD. Let the heathen be wakened, and come up to the valley of Jehoshaphat: for there will I sit to judge all the heathen round about.

The Bible passage above reads, all the heathen round about. As of now, all the nations round about Israel have the potential to become very Islamic.

The Bible prophesies that Satan’s lot will not only go after Jews, the woman which brought forth the man child, but eventually also Christians, the ones who have the testimony of Jesus Christ.

And when the dragon saw that he was cast unto the earth, he persecuted the woman which brought forth the man child… And the dragon was wroth with the woman, and went to make war with the remnant of her seed, which keep the commandments of God, and have the testimony of Jesus Christ.

Now, one of the benefits of all this spin, calling good evil and evil good, is that those who are pretending to be good cannot openly do evil. At some point though, things might change. But when that happens, everyone will be able to see their true colours.

Concerning the show Generation War, there is an indelible scene in which one German soldier says to another, “What is the point? There is no point. God has forsaken us!” (ref. 7).

Not many people know this, but German soldiers during WW2 wore belt buckles with the Prussian-era inscription “Gott mit uns”, meaning “God with us”. Some German soldiers, apparently, were under the impression that they were on the correct side of history, at least until they started to lose the war.

5. MRT (9 September 2021), “Lavrov: The effect of the vaccine against the Nazi virus that brought victory in World War II is diminishing in some countries”, marketresearchtelecast.com