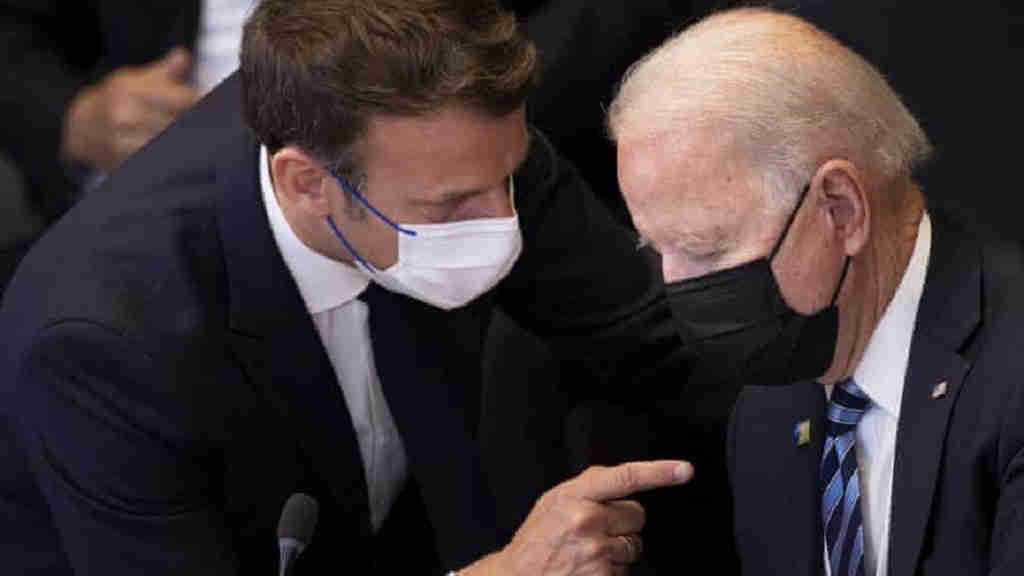 French President Emmanuel Macron just signed an agreement with Greek Prime Minister Kyriakos Mitsotakis, pledging immediate French military assistance to Greece should Greece come under attack by a third country even if that country were a NATO member, namely Turkey (ref. 1). France and Greece are already EU member states as well as NATO allies, and thus are already treaty-bound to assist each other on defence. As part of this new strategic agreement, Greece will also receive three new French frigates, a $4.8 billion deal, to be built by France’s Naval Group (ref. 2). This comes after the deception and slight of AUKUS.

This news means, France is back on the correct side! I am assuming, of course, that France means what it says.

Historically, honour is a big thing among the French. Indeed, the motto of today’s French army is “Honneur et Patrie”, “Honour and Fatherland”.

Regarding Greece and Turkey, and tensions in the Aegean and the Mediterranean, it is Bible prophecy that the beast will invade and occupy Greece (ref. Daniel 8:22-23, Joel 3:6). So, war between these two NATO members is inevitable, which means the EU in general and France in particular will fight back.

Plus, do not forget, the lyrics of the national anthem of France, La Marseillaise. It tells of the bloody flag of tyranny. It tells of those whom cut the throats of children and companions (think ISIS beheadings). And, above all, it tells of the day of glory!

Also, in Lyon, a mentally unstable man, who has since been admitted to a psychiatric hospital, threw an egg at Macron, and shouted “vive la révolution” (ref. 3). The egg did not break when it hit the French president’s shoulder, but only when it fell to the ground (ref. 3). As I have said, the French revolution of 1789 was a conspiracy of the Illuminati and demons to avenge the fall of the Templars. Ultimately, it also brought Napoléon Bonaparte to power, who was fond of putting his right hand inside his waist jacket, as all Freemasons do. This psychiatric incident in Lyon suggests demons are now upset at Macron, which means France has been recovered.

Furthermore, after AUKUS and given what has happened to Afghanistan, Macron has told Europeans to stop being “naive” about the USA (ref. 4).

In other news, elections in Germany have seen the CDU kicked out of office. The CDU is supposed to be a Christian political party but for sure it is filled with wolves in sheep’s clothing. Angela Dorothea Merkel, for one, the daughter of a pastor in East Germany, was meant to stand up to the USA, but except for Nord Stream 2, she never did. Now, Germany is going to be governed by the SPD, a left-wing and even an ex-Marxist political party (ref. 5). This election has also seen Germany’s far-right, the AfD, lose its status as the main opposition party (ref. 6). It must be reminded that the SPD voted against the Enabling Act of 1933 that gave Adolf Hitler dictatorial powers. Subsequently, that same year, Hitler banned the SPD, and eventually arrested its leaders and sent them to concentration camps.

Germany’s AfD and France’s Le Pen and America’s Donald Trump may claim to be pro-Russia and pro-Putin, but the SPD actually is.

So, interesting things are happening in Europe.

Time will tell who is on which side.

Long ago, the kingdom of the Franks was the eldest daughter of the church. Around 500 AD, Clovis I of the Franks stamped out the heresy of Arianism by conquering the Goths. In 732 AD, Charles Martel of the Franks, also known as “The Hammer”, stopped the Umayyad Caliphate as it tried to conquer all of Europe after having taken Spain. In 800 AD, on Christmas day, Charlemagne of the Franks was crowned Holy Roman Emperor. Though his kingdom did not last very long, it was arguably the height of Christendom in Europe. In 1095 AD, at Clermont in modern-day France, Pope Urban II, a native of France, called the knights of Europe to arms, to crusade against the Islamists, who had plundered, raped and viciously displaced the Christians of the Middle East.

Answering the call was Godfrey of Bouillon, also a Frank. He would successfully lead the First Crusade, and establish the Frankish Crusader Kingdom of Jerusalem.

Of course, this was before the treachery of the Knights Templar against Jesus Christ. That treachery for the sake of the know-how of usury meant that the Crusader States had to end.

At one point, even the Mongols came to the Middle East and sacked Templar lands such as Sidon.

I have therefore delivered him into the hand of the mighty one of the heathen; he shall surely deal with him: I have driven him out for his wickedness. And strangers, the terrible of the nations, have cut him off…

Even the militarily astute Richard the Lionheart would not retake Jerusalem for Europe during the Third Crusade, despite winning several battles including Jaffa, because among his army were Templars.

Pass through thy land as a river, O daughter of Tarshish: there is no more strength. He stretched out his hand over the sea, he shook the kingdoms: the LORD hath given a commandment against the merchant city, to destroy the strong holds thereof… Howl, ye ships of Tarshish: for your strength is laid waste.

In time, the Templars would become the secret society of Freemasonry. Think Mystery Babylon, the great harlot that today reigns over the kings of the earth.

And it shall come to pass after the end of seventy years, that the LORD will visit Tyre, and she shall turn to her hire, and shall commit fornication with all the kingdoms of the world upon the face of the earth.

But now, at this time of the end, France, perhaps through Emmanuel Macron, might well fight one final time for Jesus Christ. Le jour de gloire est arrivé!

Sure, modern-day France is no longer Christian: laïcité. Still, it is better to be secular than Satanic!

For he that is not against us is on our part.

In this coming world war, for those on the correct side, glory and honour awaits.