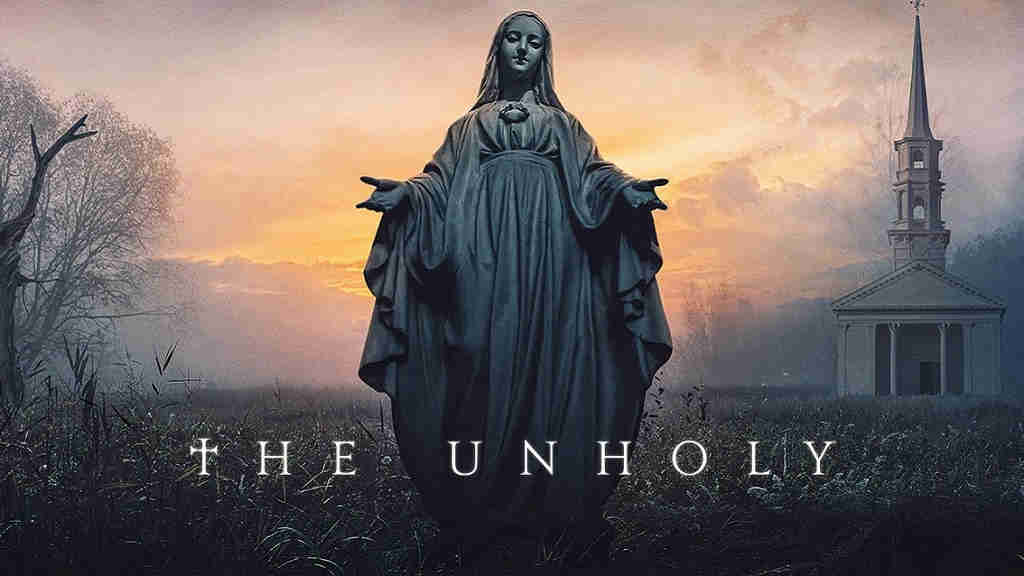 First, to elevate Mary to the status of queen is to diminish the sovereignty of the Father and of the Son. Only God, who is both the Father and the Son (i.e. the Trinity), sits upon the throne. There is no queen who sits beside him.

Seest thou not what they do in the cities of Judah and in the streets of Jerusalem? The children gather wood, and the fathers kindle the fire, and the women knead their dough, to make cakes to the queen of heaven, and to pour out drink offerings unto other gods, that they may provoke me to anger… Therefore thus saith the Lord GOD; Behold, mine anger and my fury shall be poured out upon this place…

The 2021 movie “The Unholy” makes the point rightly that the one whom some Christians think is Mary is actually an unholy angel, that is to say, a demon (ref. 1).

This expression “the queen of heaven” is in the Bible because Christians must know what the devil is up to.

In the last days, it is likely that the female god that many will be tricked into worshipping, the self-proclaimed queen of heaven, is the one the ancient Egyptians called “Isis”, the namesake of the Islamic State of Iraq and Syria. This is the same god the Assyrians called “Ishtar”, and the same the Romans called “Libertas”, who is the personification of liberty, as in the Sons of Liberty and as in the Statue of Liberty!

You see, Satanists like to champion liberty. Aleister Crowley, for one, said “Do what thou wilt shall be the whole of the Law”.

But in a Christian society, there is to be order and law and authority. It could even be said, such a society is authoritarian.

Certainly, it will be so during the coming Millennial Reign of Jesus Christ. For out of Zion shall go forth the law.

And it shall come to pass in the last days, that the mountain of the LORD’s house shall be established in the top of the mountains, and shall be exalted above the hills; and all nations shall flow unto it. And many people shall go and say, Come ye, and let us go up to the mountain of the LORD, to the house of the God of Jacob; and he will teach us of his ways, and we will walk in his paths: for out of Zion shall go forth the law, and the word of the LORD from Jerusalem.

Yesterday, I was watching the 1998 movie Elizabeth, and I was reminded of the contest between Catholic and Protestant, and the terrible things that the Jesuits, the secret agents of the pope, did to many in the name of Mary (ref. 2).

Notice, it so happened two Mary’s opposed Elizabeth: bloody Mary of England, and then Mary Stuart of Scotland.

Elizabeth I of England, who went from a prison to the palace, was a remarkable queen. She was ordained by God to transform England. Against the odds, Elizabeth I defeated the mighty Spanish Armada, a Catholic force, the world superpower at the time. God, who is the LORD of hosts, was clearly with England during that war (ref. 3, 4).

“Flavit Jehovah et Dissipati Sunt”: “God blew his winds and they were scattered”.

Indeed, this point is noteworthy. Which side is good and which is evil will be made clear by the outcome of war!

Of course, England had to defeat the Spanish Armada, because James I, the successor to Elizabeth I, would commission the King James Bible 1611, a correct translation of the Word of God.

Unfortunately, since then, the devil has managed to water down the Church of England through Jesuit intrigue.

As the catchphrase of the movie “The Unholy” goes: “When God builds a church, the devil builds a chapel next door.”

Still, I think, there are Christians among all the major denominations, including Anglicans and Catholics. Those who read the Bible and know enough should pass the test when it comes. What is the tribulation (ref. Revelation 7:14) if not a trial or a test of faith.

Those who do not pass – they who are under “strong delusion” and “receive not the love of the truth” – are supposed to be damned.