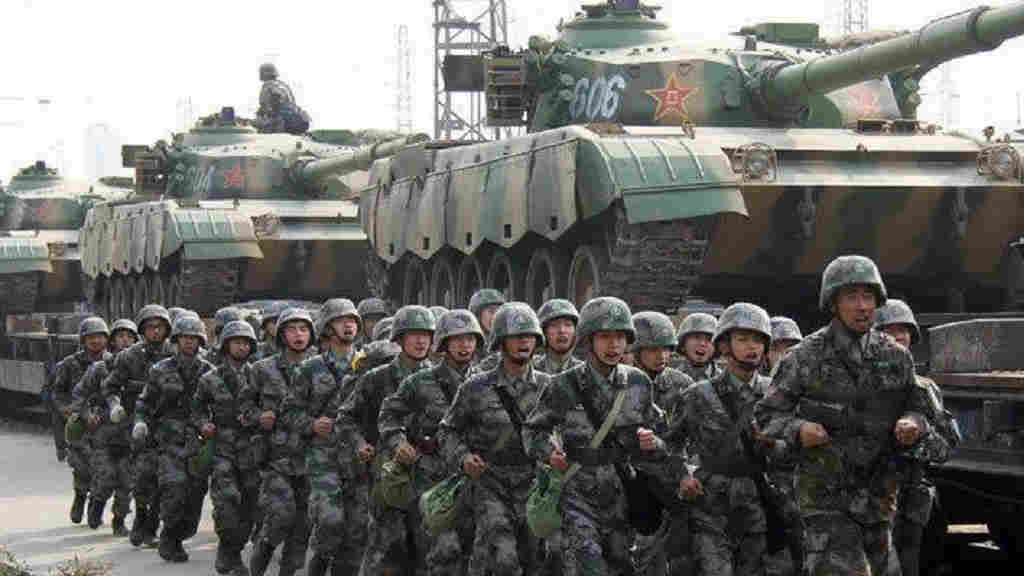 A few days ago, in China, a Ministry of Commerce notice urged the public to stockpile food and other necessities in case of an emergency. That notice to prep caused some panic buying in shops, but importantly for Bible prophecy watchers it also sparked rumours that war with Taiwan was about to start (ref. 1), a war that would involve not only China and Taiwan, kingdom against kingdom, but also China and the USA and the allies of the USA, nation against nation.

And when ye shall hear of wars and rumours of wars, be ye not troubled: for such things must needs be; but the end shall not be yet. For nation shall rise against nation, and kingdom against kingdom…

Now, there are rumours of another one, a war that would not only pit kingdom against kingdom, but surely see nation rise against nation.

The CCP is said to be not pleased with these mobilisation rumours. Maybe it is a Sun Tzu thing, to preserve the element of surprise. Maybe the rumours are wrong or exaggerated.

Keep in mind, this war over Taiwan would be no ordinary war. Such a war would be the big one, the beginning of World War 3. Indeed, such a war would mean the opening of the second seal of Revelation.

And when he had opened the second seal, I heard the second beast say, Come and see. And there went out another horse that was red: and power was given to him that sat thereon to take peace from the earth, that they should kill one another: and there was given unto him a great sword.

All true Christians know, there is an enemy – Satan, which means “the adversary” – and he must lose all power in this world in these last days. He will even lose his power in the sea.

In that day the LORD with his sore and great and strong sword shall punish leviathan the piercing serpent, even leviathan that crooked serpent; and he shall slay the dragon that is in the sea. In that day sing ye unto her, A vineyard of red wine… In measure, when it shooteth forth, thou wilt debate with it: he stayeth his rough wind in the day of the east wind.

This is the prophesied day of the east wind. Notice all of China’s missiles, including China’s hypersonics and anti-ship missiles, are designated “DF” for “Dong Feng”, 东风, which literally means “East Wind”.

Notice also, from the Pentagon, an acknowledgement that China’s PLA Navy is today in 2021 the largest in the world (ref. 3).

As for the USA, a few days ago, it was reported that the US Seawolf-class nuclear-powered attack submarine that hit an unknown object while on a mission in the South China Sea last month actually struck an underwater mountain (ref. 4). In other words, a $4 billion US submarine was damaged by the incompetence of the captain and the crew! You can’t make this stuff up.

Furthermore, the USA is behind in the race for hypersonic missiles. When the USA tried to test their fledgling system recently, after China’s supposed test that caught the attention of the world, the American rocket malfunctioned (ref. 5).

This is a reminder that, as the Bible prophecies, in this forthcoming war all of Babylon’s bows will be broken by the LORD of hosts.

Because the spoiler is come upon her, even upon Babylon, and her mighty men are taken, every one of their bows is broken: for the LORD God of recompences shall surely requite.

Every single one of their bows will be broken! Their might will fail (ref. Jeremiah 51:30).

Now, it seems to me, China prefers peace over war.

One week ago, Xi Jinping vowed to uphold world peace (ref. 6), amid the ongoing haranguing from America and others that China’s rise is a threat.

Concerning Taiwan, it must be said, by now, America has actually crossed several of China’s red lines. Diplomats have visited Taiwan to recognise Taiwan as a sovereign nation. A contingent of US marines has been secretly in Taiwan for at least a year, advising and preparing the Taiwanese army (ref. 7). Taiwanese soldiers have even been in Guam training with the US military (ref. 8). No nation would tolerate such a thing.

Joe Biden himself, the current president of the USA, has made it clear that America no longer abides by the “One China” principle (ref. 9). Later, White House staffers tried to suggest he misspoke. The fact of the matter is that the president is the commander in chief.

China has even approached Chile seeking support to join the Trans-Pacific Partnership, the TPP (ref. 10). Actually, the TPP was conceived to isolate China. In effect, this trading bloc is akin to a blockade. Strictly speaking, a blockade, otherwise known as commerce raiding, is an act of war. In German, commerce raiding is Handelskrieg, which literally translates as “trade war”.

China’s desire for peace may be noble, but as I pointed out above, the Bible explains, there is a time for peace and a time for war.

At some point, China must fight back.

In my opinion, Covid-19 is grounds enough.

Notice, a third wave is now hitting Russia and China especially (ref. 11). The “sorcerers” of Mystery Babylon (ref. Revelation 18:23), the practitioners of pharmakeia, are insidious and unrelenting. They don’t even bother to distinguish between belligerent and civilian.

Hath he smitten him, as he smote those that smote him? or is he slain according to the slaughter of them that are slain by him? In measure, when it shooteth forth, thou wilt debate with it…

Granted also, it seems to be two, China and Russia, against the whole world. The “wellfavoured harlot” (ref. Nahum 3:4) that is Mystery Babylon does in fact dominate the whole earth (ref. Revelation 17:18), as the Bible explains.

Yet, believe it or not, these two nations in the east that Satan does not control have the power to prevail. Today in 2021, the kings of the east have the numbers and the technology to do what they must when they must because God is the LORD of hosts.

In time, God will reveal to the world Babylon’s true nature (ref. Isaiah 47:1-3, Nahum 3:5-6). Remember, the coming Caliphate of ISIS will be the seventh kingdom of Satan, and Mystery Babylon under the influence of the false prophet will be the eighth (ref. Revelation 17:10-11). In time, the world will applaud the kings of the east for standing up to evil (ref. Nahum 3:19).

There is no healing of thy bruise; thy wound is grievous: all that hear the bruit of thee shall clap the hands over thee: for upon whom hath not thy wickedness passed continually?

This will be a righteous war (ref. Revelation 19:11), a world war that will see the end of the power of the wicked.

That thou shalt take up this proverb against the king of Babylon, and say, How hath the oppressor ceased! the golden city ceased! The LORD hath broken the staff of the wicked, and the sceptre of the rulers. He who smote the people in wrath with a continual stroke, he that ruled the nations in anger, is persecuted, and none hindereth. The whole earth is at rest, and is quiet: they break forth in singing.

For the time being, there are rumours that it is all about to begin.

9. “We have a commitment: Biden vows to defend Taiwan”, youtube.com/watch?v=A4hK_CdSTW0, youtube.com