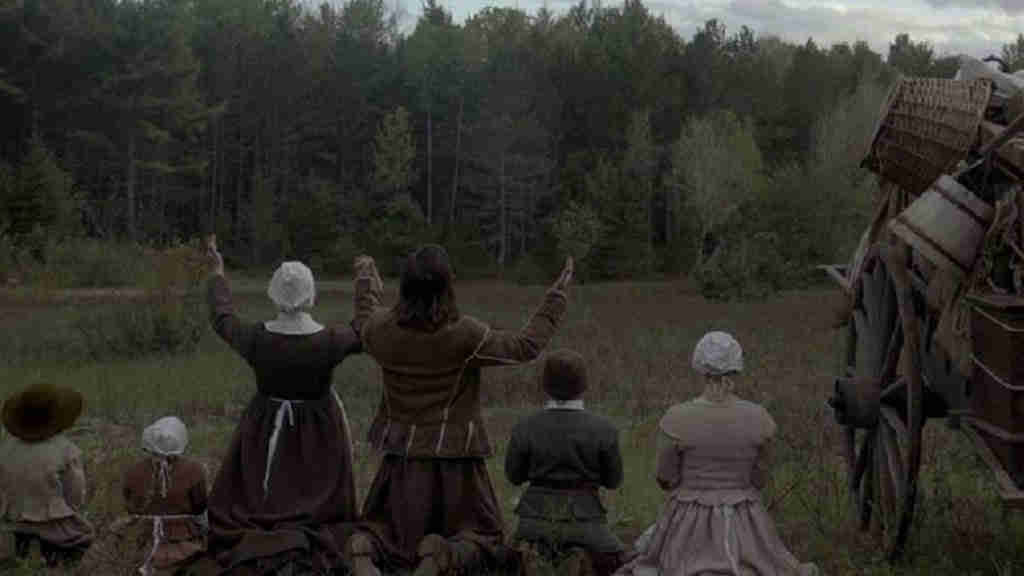 The Satanic Temple may claim to be not about the worship of Satan, and to be merely about challenging the Judeo-Christian way of life. But some of us know, as the saying goes, “the greatest trick the devil ever pulled was convincing the world he didn’t exist”. At any rate, the fact that The Satanic Temple would like to “inspire a Satanic experience” and bring about “a Satanic revolution” sort of gives the game away (ref. 2).

There is no doubt in my mind that The Witch was inspired by a demon, the work of a genie or a genius, as the ancient Greeks would say.

There is an allusion in The Witch to Job in the Bible.

There was a man in the land of Uz, whose name was Job; and that man was perfect and upright, and one that feared God, and eschewed evil. And there were born unto him seven sons and three daughters. His substance also was seven thousand sheep, and three thousand camels, and five hundred yoke of oxen, and five hundred she asses, and a very great household; so that this man was the greatest of all the men of the east.

Job was subjected to Satan’s temptation, which is another word for trial or tribulation. Satan was permitted to smite Job, taking away his health (ref. 2:7), his sons and daughters (ref. Job 1:18-19), and his wealth (ref. Job 1:14-15). Some of his property was stolen from him. The rest was destroyed.

Through it all, Job sinned not and remained loyal to God.

In all this Job sinned not, nor charged God foolishly.

Now, what is not mentioned in the Bible is that before all this Job’s daughters had turned away from God to worship Satan. Job did suspect that his sons might have sinned against God (ref. Job 1:5), but he did not know about his daughters.

Job’s daughters did sin against God, because, today, there is a secret society called “Job’s Daughters International”. It is associated with Freemasonry. This means, Satanists have long celebrated the fact that they were able to win over Job’s daughters.

Probably, Job’s daughters made a pact with evil to live deliciously, a Faustian bargain.

In the movie, William and his family are afflicted by a demon. They suffer one problem after another, as Job did.

The mother of the family, Katherine, even says at one point, “I have become as Job’s wife”.

From the opening scene, the audience learns that William and his family are banished from a plantation in New England, because of a disagreement over scripture.

It is not revealed to the audience which side of the dispute is properly Christian and which is heretical, but if William is to be likened to Job, then William must be the one that is truly Christian.

Job, after all that he went through, remained loyal to God and he understood that he would be resurrected at the latter day upon the earth.

For I know that my redeemer liveth, and that he shall stand at the latter day upon the earth: And though after my skin worms destroy this body, yet in my flesh shall I see God: Whom I shall see for myself, and mine eyes shall behold, and not another, though my reins be consumed within me.

However, in the movie, before his death, William utters “Corruption, thou art my father”. This suggests that William is the one that is heretical, or else there is a Satanic spin and wishful thinking that Job failed his tribulation.

Then Satan answered the LORD, and said… put forth thine hand now, and touch all that he hath, and he will curse thee to thy face.

Remember, this movie was inspired by a demon and is endorsed by the Satanic Temple.

Now, moving on to the evil that is portrayed in the film.

This movie shows to the audience all the power and wiles of the devil (ref. 3).

It is all there.

Demonic possession (ref. Mark 5:1-15): the bewitched boy Caleb who vomits out an apple, and also the he-goat that kills the father of the family William.

Manipulation of thoughts and dreams (ref. Matthew 16:22-23): the suckling dream of the mother Katherine.

Levitation (ref. Matthew 4:6): the flying coven of witches at the end.

False accusation (ref. Revelation 12:10): the young girl Mercy accusing her sister Thomasin of witchcraft after the disappearance of the baby.

Temptation to sin (ref. Matthew 4:1-11) and a Faustian pact to “live deliciously” (ref. Revelation 18:9): the switching sides of the main character Thomasin at the end of the movie.

Concerning Thomasin, the name Thomasin is obviously an amalgamation of “Thomas”, the apostle who doubted the resurrection of the Son of man Jesus Christ (ref. John 20:24-25), and “sin”, which means a transgression of the law.

To be imputed of sin, one must be subject to the law, or in other words the commandments of God.

For until the law sin was in the world: but sin is not imputed when there is no law.

The most important of the commandments is the first: thou shalt worship no other god.

Thou shalt have no other gods before me.

This is why a Christian or a Jew that makes a pact with the devil is someone that has committed sin.

He that committeth sin is of the devil; for the devil sinneth from the beginning…

When in the end Thomasin, who was brought up a Christian, agrees to become a witch in order to “live deliciously” (ref. Revelation 18:7-9), she commits sin. In the end, like the daughters of Job, Thomasin forsakes Jesus Christ, and becomes a traitor.

This explains why the Satanic Temple likes this movie so much. In this movie, evil triumphs in the end. Even the one likened to Job supposedly gives in to evil, and curses God before he dies.

Now, in the book of Job, God says that at the ends of the earth, he will shake the wicked out of it through his son Jesus Christ.

“Ends”, plural, because there will be two ends of the earth. The first on the day of the LORD, the Second Coming of Jesus Christ (ref. Revelation 19). The second when the sun burns up the earth (ref. 2 Peter 3:10) and there is a need for a new heaven and a new earth (ref. Revelation 21:1).

“The wicked” means both the human servants of Satan, and the angels who have sided with Satan.

Some of this work of removing the wicked throughout the world will be done by Christians during the Millennial Reign.

Remember, Jesus Christ must reign here on earth as king of the kingdom of God until all enemies have been subdued.

Look unto me, and be ye saved, all the ends of the earth: for I am God, and there is none else. I have sworn by myself, the word is gone out of my mouth in righteousness, and shall not return, That unto me every knee shall bow, every tongue shall swear.

That at the name of Jesus every knee should bow, of things in heaven, and things in earth, and things under the earth; And that every tongue should confess that Jesus Christ is Lord, to the glory of God the Father.

Within the boundaries of the kingdom of God, centred at Zion, the work will be completed by angels around the time of the seventh trumpet and vial.

The Son of man shall send forth his angels, and they shall gather out of his kingdom all things that offend, and them which do iniquity; And shall cast them into a furnace of fire: there shall be wailing and gnashing teeth.

But elsewhere, Christians, having been changed, given a new body and made holy, will be involved.

And, behold, I come quickly; and my reward is with me, to give to every man according as his work shall be. I am Alpha and Omega, the beginning and the end, the first and the last.

Remember, the early apostles were given the Holy Spirit at Pentecost, and so they had power over the enemy. The real Holy Spirit! Actual power over demons!

Behold, I give unto you power to tread on serpents and scorpions, and over all the power of the enemy: and nothing shall by any means hurt you.

So you see, in the end, good triumphs over evil.

As for Mystery Babylon, Satan’s eighth kingdom, the great spiritual harlot that reigns over the kings of the earth in these last days, her end happens on the day of the LORD, the beginning of the Millennial Reign of Jesus Christ.

Mystery Babylon is a place of sorceries, enchantments, and also witchcraft. Sorcery has been in Babylon “since her youth” (ref. Isaiah 47:12), since she was a “wilderness” (ref. Revelation 17:3), even when she was New England.