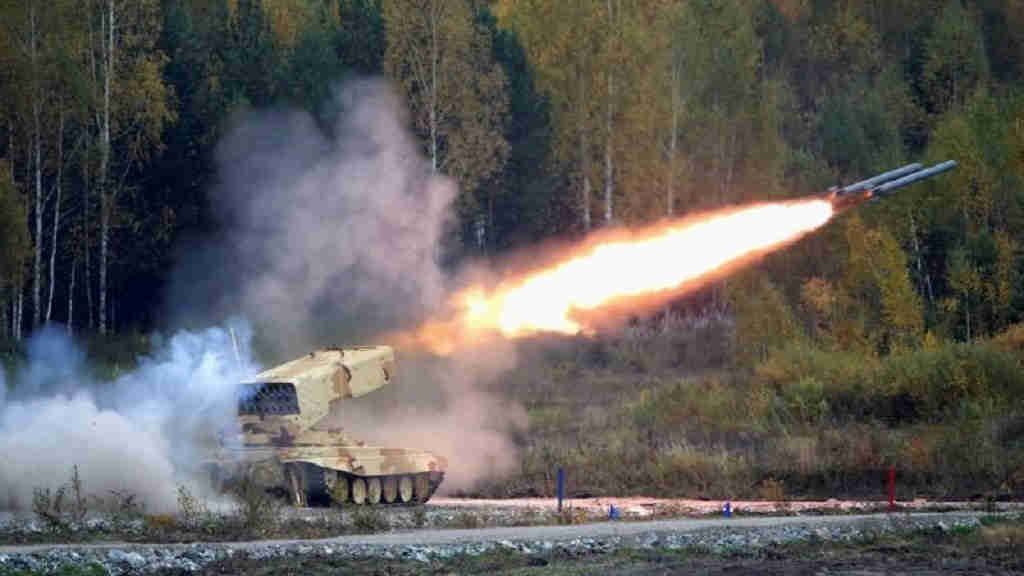 The latest news on the Ukraine war is that Russia has begun to deploy its TOS-1 and TOS-1A heavy-flamethrowers (ref. 1). These are multiple launch rocket systems, acronym MLRS, that can fire either incendiary or thermobaric rockets, both of which are fiery. The rockets are mounted on a T-72 tank chassis.

The TOS-1 and TOS-1A heavy-flamethrowers are literally tanks of fire: merkavas that shoot fire.

The expression “Chariots of Fire” actually occurs in the Bible, in 2 Kings 6:17 of the KJV.

And Elisha prayed, and said, LORD, I pray thee, open his eyes, that he may see. And the LORD opened the eyes of the young man; and he saw: and, behold, the mountain was full of horses and chariots of fire round about Elisha.

But the Hebrew of that expression in 2 Kings 6:17 is “rekeb esh”, meaning a fiery carriage of an angel. By contrast, “merkava ha-esh” literally reads “the fire of tanks”.

Today, incendiary and thermobaric rockets are an intrinsic part of Russia’s war fighting doctrine. The Russian military has used multiple launch rocket systems ever since the USSR’s ​Katyusha.

Incidentally, America and those aligned with her also use MLRSs, but these sorts are fond of rockets with cluster warheads. America’s ATACMS, for instance, typically explodes shrapnel: a rain of steel that shreds the target.

Russia and China, the prophesied kings of the east, prefer rockets that burn. Russia’s TOS-1A is nicknamed “Sunburn”.

Now, the reason I bring this up is because it is prophesied in the Bible that the armies of the LORD will wage war against their enemies a particular way, using fire.

Fire is the signature weapon of the LORD. Even the two witnesses, when they arrive, will burn with fire their enemies – that is to say, anyone who tries to kill them before they complete their work.

The military value of Russia’s thermobaric heavy-flamethrower is that it defeats a fortification. The fuel-air munitions suck up all of the surrounding oxygen to generate a high-temperature explosion. The effect is to either vaporise the soldiers within the target area or destroy their lungs. No one can survive the blast. Therefore, the fortification will surely fall.

This way of fighting means taking ground is almost sure thing.

You see, if the enemy gathers in an area and even fortifies that area, he will be defeated this way. But if the enemy instead disperses, then he will be overrun – essentially, defeated in detail.

Notice also that the Russian President Vladimir Putin has now put his nuclear forces on “high alert” (ref. 2). Presumably, this is in case the west is stupid, and decides to respond with nuclear weapons.

Right now, the USA and also Europe and others as well are already in this war as belligerents. They are now openly supplying Ukraine with weapons and ammunition (ref. 3, 4), hoping to wear out Russia in a guerrilla-style war. Besides that, the USA and others are also clearly assisting Ukraine with intelligence on troop movements and positioning (ref. 5). They claim this sort of information is coming from private sector satellites, but of course Russia is not naive.

I should also remind that “strategic bombing”, or burning cities to the ground, is a legitimate battleplan. The UK and the USA, for example, dropped an extraordinary amount of incendiary bombs on Dresden during WWII, in an attempt to break the will to fight of the German people.

Breaking the will of a nation is one thing. Taking ground is another. Concerning the latter, scorching an area with thermobaric and incendiary weapons, and even bulldozing entire buildings, will deny Ukrainian soldiers and partisans that area. Accordingly, Ukrainian soldiers and partisans will lose ground and become weaker. It follows also that those cities that remain largely civilian, or non-belligerent, can avoid the war and carry on happily ever after.

Seek ye the LORD, all ye meek of the earth, which have wrought his judgment; seek righteousness, seek meekness: it may be that ye shall be hid in the day of the LORD’s anger.

To those who say that this way of fighting is a war crime, I should like to point out that Ukraine has already committed war crimes, namely the maltreatment of Russian dead bodies (widespread on American social media), the humiliation of Russian POWs on camera, and the use of Russian POWs for war propaganda.

At any rate, who is Geneva to say what are the acceptable conventions of war? Remember the 2016 Satanic-like Gotthard Tunnel ceremony (ref. 6)? That happened in Switzerland. Is Geneva neutral? I think not.

Also, when the USA sanctions Russia generally, where is the distinction between combatant and civilian? There is none.

For that matter, can you imagine ISIS obeying the rules of war that the world has become accustomed to? ISIS beheads combatants and civilians alike, and enslaves women.

My point is, somewhere along the line the world has forgotten that war means killing the enemy and taking ground. Let me remind, in the Bible, when Joshua took Jericho, his army killed both man and woman, young and old, with the edge of the sword.

And the LORD said unto Joshua, See, I have given into thine hand Jericho, and the king thereof, and the mighty men of valour… So the people shouted when the priests blew with the trumpets… and they took the city. And they utterly destroyed all that was in the city, both man and woman, young and old, and ox, and sheep, and ass, with the edge of the sword.

In the news, there is talk that Russia is not achieving its military objectives: that Russia has already lost this war (ref. 7).

The reason it seems this way is because Russia is trying to tread softly. But this approach is costing Russia the lives of its soldiers, and time.

I have seen footage on social media of a Ukrainian man trying to punch a Russian soldier (ref. 8), presumably trying to beat him to death, even though the Russian soldier is armed with a gun. The attack is only stopped when the soldier fires his gun towards the ground. This sort of thing would not be tolerated by many other armies.

The world, right now, is telling itself that Russia cannot win this, because Russia can be isolated, conned and bullied.

The world is wrong. Russia has the means, and the war-fighting doctrine to win. At some point, Russia will do everything that is necessary to prevail.

The same can be said of those who are to pick up the mantle after the day of the LORD: those whom God will give wings as eagles, and power over devils.

To be clear, evil cannot win. Evil must be stopped, or else it will spread and then there will be nothing left to save. Evil will come to an end, because ultimately good is more powerful than evil.

Even if some part of evil were to avoid Armageddon, at some point that evil would be brought to an end.

Have you heard the satirical parable of the jack rabbit and the box turtle (ref. 9)? It is from “The Hunt” (2020), a movie pertinent to Christians that I will explain further some other time, a movie no doubt inspired by a daemon.

Who is the jack rabbit with the hammer? Time will tell.

But the point is this: the adversaries of the LORD shall be broken to pieces, one way or another.

The adversaries of the LORD shall be broken to pieces; out of heaven shall he thunder upon them: the LORD shall judge the ends of the earth; and he shall give strength unto his king [the king of the kingdom of God], and exalt the horn of his anointed [Jesus Christ].

Now, the jack rabbit is someone who is running the proverbial race. The famous runner Eric Liddell, however, did run a literal race. Liddell who is portrayed in “Chariots of Fire” (1981) was actually and miraculously fast, and he once said God made him fast. His calling was to bring honour to God through Olympic glory.

In Chariots of Fire, Liddell happens to deliver a sermon on Isaiah 40.

Behold, the nations are as a drop of a bucket, and are counted as the small dust of the balance: behold, he taketh up the isles as a very little thing… All nations before him are as nothing; and they are counted to him less than nothing, and vanity. To whom then will ye liken God?… That bringeth the princes [demons] to nothing; he maketh the judges of the earth as vanity… To whom then will ye liken me, or shall I be equal? saith the Holy One. Lift up your eyes on high, and behold who hath created these things, that bringeth out their host by number: he calleth them all by names by the greatness of his might, for that he is strong in power; not one faileth… Hast thou not known? hast thou not heard, that the everlasting God, the LORD, the Creator of the ends of the earth, fainteth not, neither is weary? there is no searching of his understanding. He giveth power to the faint; and to them that have no might he increaseth strength. Even the youths shall faint and be weary, and the young men shall utterly fall. But they that wait upon the LORD shall renew their strength; they shall mount up with wings as eagles; they shall run and not be weary…

Isaiah 40 also makes the point that evil cannot win. There will be an end to evil: the world as it is today (ref. 1 John 5:19) will come to an end.

Behold, the Lord GOD will come with strong hand, and his arm shall rule for him: behold, his reward is with him, and his work before him.

And, behold, I come quickly; and my reward is with me, to give to every man according as his work shall be. I am Alpha and Omega, the beginning and the end, the first and the last.

2. Paul Johnson and Will Jackson (28 February 2022), “Russia’s nuclear ‘deterrent force’ has been put on ‘high alert’ by Putin, but what does that mean?”, abc.net.au

9. “THE HUNT | The Tale Of The Jack Rabbit”, youtube.com/watch?v=WlsCFW3gKtY