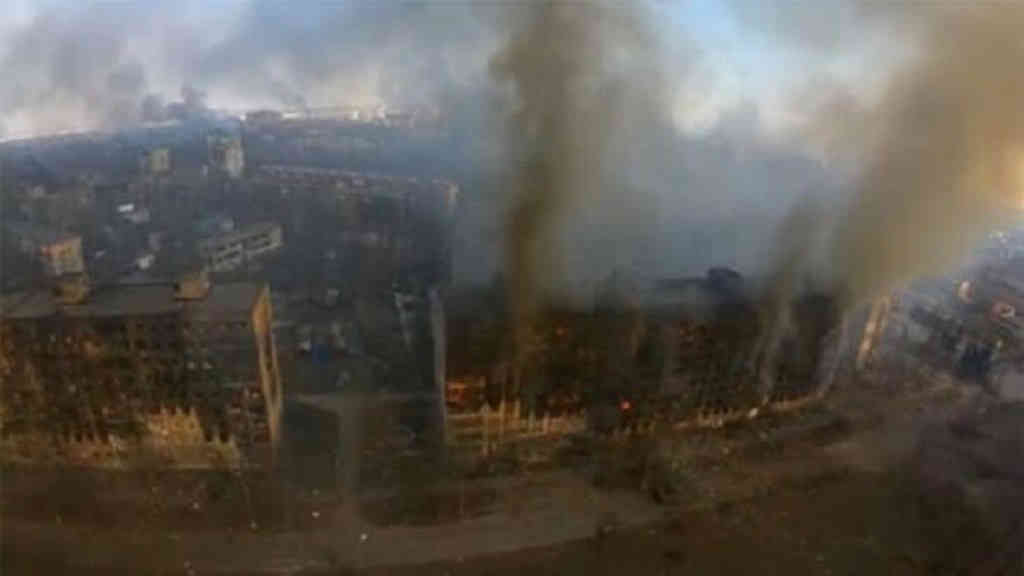 This 16 March 2022 UTC, according to Earthquake Monitor, there were some 497 earthquakes across the world (ref. 1). All through March 2022 so far, there has been non-stop seismic activity of various magnitude in different parts of the world. However, these latest earthquakes are remarkable because they have occurred in potential flashpoints, and at a time when the world is on the verge of World War III.

The Bible prophesies that when nation shall rise against nation, and kingdom against kingdom, there shall be earthquakes in diverse places! Even signs from heaven.

But when ye shall hear of wars and commotions, be not terrified: for these things must first come to pass; but the end is not by and by. Then said he unto them, Nation shall rise against nation, and kingdom against kingdom: And great earthquakes shall be in divers places, and famines, and pestilences; and fearful sights and great signs shall there be from heaven.

A 7.3 earthquake shook the coast of Fukushima, Japan (ref. 2), triggering a tsunami alert, causing buildings to rock, and plunging Tokyo into literal darkness. Two weeks ago, in Japan, former prime minister and staunch Shinto Buddhist Shinzo Abe began a debate that Japan should go nuclear. Two days ago, there was talk that Japan could host US nuclear weapons, despite the fact that Japan is a signatory of the Nuclear Non-Proliferation Treaty (ref. 3). Needless to say, if Japan goes nuclear this way, then Japan becomes a nuclear target. Surely it is no coincidence that Fukushima happens to be the site of Japan’s nuclear accident. Since US marines are in Japan and Japan is in America’s anti-China Quad, plus the fact that Japan still harbours Russia’s Kuril Islands, means Japan will be a flashpoint.

A 5.2 earthquake hit Ladakh (ref. 4). It lasted only a few seconds and there was no damage. Today, a part of Ladakh is disputed by China and India, and another part is disputed by Pakistan and India. India also happens to be in America’s anti-China Quad (ref. 5), and India today is led by the BJP, which is essentially a Hindutva government. This means India will be a flashpoint.

A 5.1 earthquake hit Gilgit-Baltistan (ref. 6). Again, it is no coincidence that this area happens to be contested by Pakistan and India. Geo-politically and prophetically, Pakistan is complex. Though Pakistan is an “Islamic Republic” and Pakistan’s spy agency ISI did create Afghanistan’s Taliban during the Cold War with the help of America’s CIA, and though Pakistan is within the boundaries of the empire of Alexander the Great, which suggests it might even be one of the seven heads of the fourth beast (ref. Daniel 8:22-23), the government of Pakistan under PM Imran Khan is currently fighting against ISIS, specifically ISIS-K (ref. 7).

A 5.5 earthquake occurred near the coast of West Java, Indonesia. It was felt in Jakarta (ref. 8). Indonesia is currently at war against the insurgents of West Papua, whose independence flag is the “Morning Star”. These indigenous people were made somewhat Christian by the Dutch, but then they were robbed of a country by Islamists.

Two days ago, there was another earthquake, 6.7, near Sumatra (ref. 9), the very Islamic part of Indonesia. My guess is, soon Indonesia will also, together with Muslim majority Malaysia, wage war against Singapore, which is known as the “lion city”, whose system of National Service was established in the 1960s with secret assistance from Israel’s Defence Force.

Last but not least, a 4.7 earthquake hit southeastern Taiwan (ref. 11), specifically in Taitung, 台東. Taitung literally means “Taiwan East”, or Taiwan is east rather than west. That is to say, Taiwan shall be a part of China, one of the kings of the east. When it happens, a China versus Taiwan war will surely involve the USA, and so it will be the ultimate instance of kingdom against kingdom, and nation against nation, as prophesied in the Bible. Remember, long ago the nation of China was split into three kingdoms, and then the three kingdoms became once again one nation. More recently, after WWII as part of the Cold War, America split China into two kingdoms. America would like Taiwan to be a part of the west, to be used against mainland China, sort of how they are trying to make Ukraine an instrument against Russia.

Speaking of the contest for Ukraine, I should point out that despite what is being said in mainstream media, the Russian army is not losing.

Yes, Russia has not seized many cities, but this is because Putin is actually holding back, showing mercy and giving the Ukrainian population every opportunity to renounce Zelensky, the neo-Nazis of Ukraine, and the USA.

By the way, when Russia offers a city a humanitarian corridor, individual Ukrainians in that city must choose the correct side and move in that direction. The whole point of the tribulation in these last days is to see who is on which side.

Certainly, when the Antichrist begins his empire, he will try to force all nations and individuals to submit to Islam. That essentially means everyone must choose either the side of the Antichrist, aka the beast, or else the opposing side. Everyone who chooses the side of the beast will be damned by Jesus Christ (ref. Revelation 13:8).

Anyway, about Putin holding back, apparently, the way the Russian army takes a city is very different from the way the USA does so. An Indian retired Major General, GD Bakshi, who is familiar with Russia’s combat doctrine, has explained in one interview that normally Russia would saturate a city with rockets from MLRSs (ref. 12) before moving in with tanks and infantry to seize key locations. This approach means, it is incumbent on civilians to flee out of harm’s way when given the opportunity.

It is very interesting to hear a military professional say that this happens to be Russia’s combat doctrine today.

It is important to know that the Bible prophecies that some cities will be ruined.

From a military standpoint, if guerrilla fighters are denied a place to rest, then their fight and supply lines will be more difficult. Furthermore, if snipers and recon are denied tall buildings, then they will have fewer effective vantage points.

So, in due time, Russia and China will take cities the way that they are accustomed to, and in so doing, the kings of the east will prevail.

About the strategy of “winning hearts and minds”, when has America or anyone ever won a counter insurgency by winning hearts and minds? Vietnam? Iraq? Afghanistan? Vietnam is now led by a communist party. Iraq after Saddam Hussein was given to Shia Muslims and Iran on the one hand, and ISIS on the other. Afghanistan was unceremoniously handed back to the Taliban despite twenty-one years and the promise of Enduring Freedom.

For that matter, in 1965 during the Vietnam war, US marines burned down the whole village of Cam Ne in South Vietnam, when they found out some insurgent fired a few rounds towards them from it (ref. 13). Where was the notion of winning hearts and minds then?

There is also the 1916 attempted rebellion in Ireland during WWI known as Easter Rising. At that time, Britain was fighting for the LORD of hosts, because the British Empire would go on to liberate Jerusalem and bring an end to the Ottoman Caliphate. For the rebellion against Britain, America supplied funds and Germany supplied weapons. The rebels seized the post office and a few other civic buildings in Dublin, and then proclaimed an independent Ireland. But rather than engage in street-to-street fighting, the British army pounded the insurgents with artillery, causing a large part of Dublin to be in ruins. Artillery won that contest.

My point is, militarily this is the way of things. When in a war zone, civilians must move out of harm’s way.

At any rate, in these last days, buildings and towns and cities everywhere will be ruined by all sorts of things. So it is best not to be attached to anything. There will be floods, and tsunamis, and tornadoes, and bush fires, and hail stones, and asteroids, and above all, earthquakes.

When the seventh angel sounds his trumpet and pours out his vial, there will be a tremendous earthquake that will be felt worldwide that will cause the cities of the nations to fall. At that time, buildings and structures of all sorts in all parts of the world will be ruined, or at least damaged in some way.

And the seventh angel poured out his vial into the air; and there came a great voice out of the temple of heaven, from the throne, saying, It is done. And there were voices, and thunders, and lightnings; and there was a great earthquake, such as was not since men were upon the earth, so mighty an earthquake, and so great. And the great city was divided into three parts, and the cities of the nations fell…

The time of the end is a time of wrath. But rest assured, after the war, when evil has been defeated, the world will begin anew.

5. PTI (12 March 2022), “America will continue to support India with equipment it needs along LAC with China: Top US admiral”, timesofindia.indiatimes.com