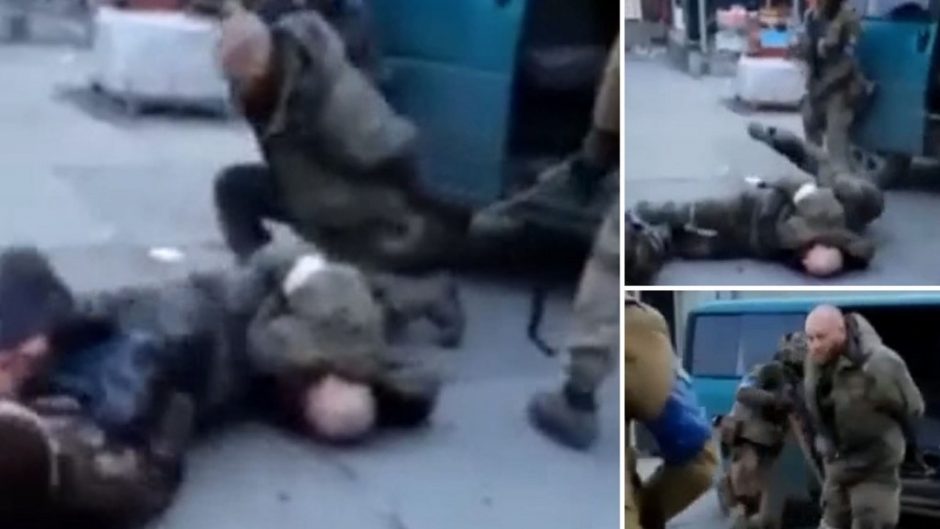 Video footage has surfaced of Ukrainian soldiers in Kharkiv shooting in the leg at point blank range Russian prisoners of war (ref. 1). These Russian soldiers, who have surrendered to the Ukrainians, have their hands tied up, and yet one by one they are shot and made to fall to the ground. By the current rules of war – the Geneva Conventions – this is obviously a war crime.

One Russian even tries to kneel before it is his turn, but still he is shot and made to fall. Some of the Russians have their bones shattered, and some begin to bleed profusely, bright red, which suggests an artery was hit, which means they are at risk of bleeding to death (ref. 2). The Russian POWs appear to be in shock and pain, as the hoods over their heads are removed, and as the Ukrainians proceed to kick and beat them while they are on the ground and now wounded.

The Russian soldiers are said to be part of a reconnaissance team that was captured in the Kharkiv region. The video was filmed by the Ukrainian soldiers themselves and posted on Telegram (ref. 3), as a trophy or something.

Maria Dubovikova, a Russian journalist, first broke the news (ref. 3). The video has since gone viral on social media.

Contrast that with how the Russian army treats Ukrainian POWs (ref. 4).

The footage discovered by Maria Dubovikova, which was posted by Ukrainian soldiers on Telegram, reminds of the war crimes being perpetrated against Tigrayan civilians by the Ethiopians and the Eritreans on the other side of the world. There, every so often, unarmed villagers are gunned down simply because they are Tigrayans, and, what is more, the perpetrators are the ones who film it all and post it online.

Pointless sadistic cruelty is often a sign of evil spirits. Remember, this unfolding world war is one that involves both humans and angels.

And there was war in heaven: Michael and his angels fought against the dragon; and the dragon fought and his angels, And prevailed not; neither was their place found any more in heaven. And the great dragon was cast out, that old serpent, called the Devil, and Satan, which deceiveth the whole world: he was cast out into the earth, and his angels were cast out with him… Therefore rejoice, ye heavens, and ye that dwell in them. Woe to the inhabiters of the earth and of the sea! for the devil is come down unto you, having great wrath, because he knoweth that he hath but a short time.

I recall, in 2015, coming across a video on Youtube that showed Ukraine’s neo-Nazi Azov battalion crucifying a captured pro-Russian Donbas fighter, on a cross, complete with nails, and then setting him on fire, all the while he struggles in pain. I can’t find online anymore the full video where nails are hammered into his hand, but I have found a shorter clip (ref. 5). Due to the footage going viral, Azov has since released a statement saying that the video in question is fake. But then again, they would say that, wouldn’t they?

Crucifying individuals is the sort of thing that ISIS did in Syria and elsewhere (ref. 6).

It follows that all who are on the side of the Devil are the same way.

Besides being unnecessarily cruel in this day and age, crucifying someone to death is an affront to Jesus Christ.

Concerning the Geneva Conventions, as I have said, these accepted rules of war mean nothing to the Devil’s men.

At its height, the beast with seven heads and ten horns will not distinguish combatant from civilian.

Even the beast with two horns like a lamb, in Babylon, will eventually execute unarmed civilians – Christian and Jewish men, women and children – for simply refusing to worship the beast and to receive the mark of the beast (ref. Revelation 13:15).

In some parts of the world, the Devil’s men might imprison the saints rather than kill them. But not so in Babylon where the Devil controls all the instruments of power (ref. Revelation 18:24, 16:6, 13:15).

This final war of mankind will be a winner-takes-all contest between God and the Devil.

The Bible tells that ideally all who have chosen the side of the Devil and certainly all who fight in combat for the Devil must die in these last days (ref. Zechariah 12:9, Nahum 1:2-9).

What do ye imagine against the LORD? he will make an utter end: affliction shall not rise up the second time.

To this point, at Armageddon, every individual soldier on the side of evil, who manages to escape the attention of the kings of the east, will still be slain by Jesus Christ himself.

And the remnant were slain with the sword of him that sat upon the horse, which sword proceeded out of his mouth: and all the fowls were filled with their flesh.

So, this unfolding world war will be fought with increasing intensity and ferocity.

Towards the end, it will be an all-in type situation. At that time, around the sixth trumpet and vial, the east will muster at full strength. The size of that army will be something the world has never seen!

He paweth in the valley, and rejoiceth in his strength… He swalloweth the ground with fierceness and rage: neither believeth he that it is the sound of the trumpet.

Furthermore, on the matter of the fiery annihilation of Babylon, the Bible prophesies that that will happen at the time of the seventh trumpet and vial (ref. Revelation 16:17-19), which is the day of the LORD itself (ref. Isaiah 13:1-6).

Long before then, the evil nature of Babylon will be revealed to the world (ref. Isaiah 47:3, Nahum 3:5), and Babylon will betray Israel (ref. Jeremiah 51:35-37). For many, these two things are almost impossible to imagine right now.

As of now, only the first seal of Revelation has been opened.

4. “Large number of Ukrainian Soldiers captured by the Russian army in the Kyiv region”, youtube.com/watch?v=wOzgpghPtQc