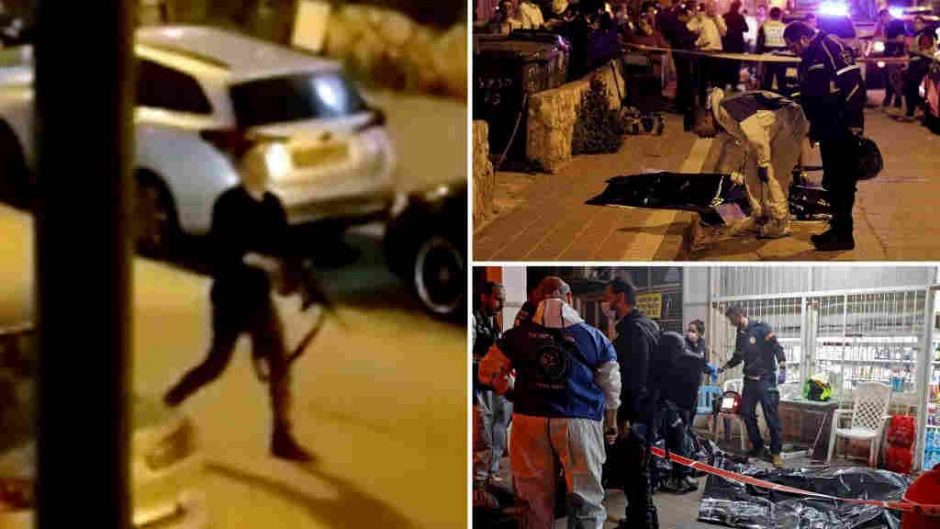 First, four Israelis were stabbed to death at a shopping center and a petrol station in Beersheba by a Bedouin Israeli who was once imprisoned by Israel for supporting and promoting ISIS (ref. 1). He was shot dead by two armed Israeli civilians (ref. 2).

And today, in Bnei Brak, an ultra-Orthodox suburb of Tel Aviv, an Arab Palestinian from the West Bank, armed with an assault rifle, opened fire on passers-by, killing five Israelis, including a police officer (ref. 4).

Addressing the nation, Israeli PM Naftali Bennett said, “We are at the start of a challenging time.” (ref. 5)

If not a coincidence, his words point to the coming great tribulation.

Prophetically, when the fourth seal is opened, Jews everywhere will be attacked by the forces of Satan (ref. Revelation 12:13, Matthew 24:9-10). In Matthew 24, Mark 13 and Luke 21, it is clear that this will happen shortly after the world sees nation rise against nation, and kingdom against kingdom – the Russia-Ukraine war, for example.

For nation shall rise against nation, and kingdom against kingdom: and there shall be famines, and pestilences, and earthquakes, in divers places. All these are the beginning of sorrows. Then shall they deliver you up to be afflicted, and shall kill you: and ye shall be hated of all nations for my name’s sake. And then shall many be offended, and shall betray one another, and shall hate one another.

And ye shall be hated of all men from my name’s sake: but he that shall endure until the end, the same shall be saved.

So, Jews across the world will be hated and they will come under physical attack, but then the state of Israel itself will also come under attack, and the Israel Defence Force will fight back. Israel will be attacked by the armies of the Assyrian, aka the Antichrist, the leader of the beast with seven heads and ten horns.

And when ye shall see Jerusalem compassed with armies, then know that the desolation thereof is nigh.

Now, notice ISIS claimed responsibility for the attack in Hadera through their media agency, Amaq. But to date, there has been no statement from Amaq that the leader of ISIS, Abdullah Qardash, is dead, as the American government would have the world believe. So, when Qardash resurfaces, don’t think that the Devil has somehow resurrected him, because of course the Devil cannot resurrect anyone for he is not God. Rather, the truth of the matter is that Qardash was never killed in the first place, and America simply lied about what they did.

So, the time of tribulation is almost here.

A tribulum is something that separates the chaff from the wheat. Just as there are false Jews such as Ukraine’s Volodymyr Zelensky and America’s George Soros, there are false Christians.

For those who profess to be Christian, the tribulation is a test of faith. The Bible explains, a true Christian is someone who keeps the commandments of God and remains faithful to Jesus Christ (ref. Revelation 14:12).

He that overcometh, the same shall be clothed in white raiment; and I will not blot out his name out of the book of life, but I will confess his name before my Father, and before his angels.

And he that overcometh, and keepth my works unto the end, to him will I give power over the nations

Any Christian who forsakes Jesus Christ for the beast is a fake or a failure.

Did you know that Islamic eschatology also speaks of “a beast from the earth”? This beast is someone on the side of Islam, and he is brought forth for those who do not believe in Islam.

The Quran An-Naml Sura 82 reads as follows: “And when the decree of the hour comes to pass against them, we will bring forth for them a beast from the earth, telling them that the people had no sure faith in our revelations.”

In the Bible, this beast is the second beast of Revelation 13, the one that comes up “out of the earth” with two horns like a lamb and speaks as a dragon.

And I beheld another beast coming up out of the earth; and he had two horns like a lamb, and he spake as a dragon. And he exerciseth all the power of the first beast before him, and causeth the earth and them which dwell therein to worship the first beast, whose deadly wound was healed.

The first beast whose deadly wound was healed is none other than ISIS, or the Islamic State, represented by the Assyrian. In 2019, the caliphate of ISIS, in Iraq and Syria, was brought to an end. Soon, that wound will heal because of Satan (ref. Revelation 13:2), and so the caliphate will re-emerge.

This time around, ISIS will control ten nations. To put things into perspective, Hitler only commanded three.

Any Muslim that does not give bay’ah to the caliph of ISIS but rather fights on the opposing side may well come to the truth about God and Satan after the war.

So, the Bible says, a Jew, to be saved, must escape, evade, and endure until the end. On the other side, Islam calls on Muslims to kill as many Jews as possible in the last days.

For then shall be great tribulation, such as was not since the beginning of the world to this time, no, nor ever shall be. And except those days should be shortened, there should no flesh be saved: but for the elect’s sake those days shall be shortened.

Furthermore, the Bible says, a Christian, to be saved, must remain faithful to Jesus Christ, and have faith in the resurrection of the dead. On the other side, Islam will bring forth a beast from the earth to convert Christians in the last days.

Accordingly, both Jews and Christians will go through tribulation in these last days, but it is different for the two.