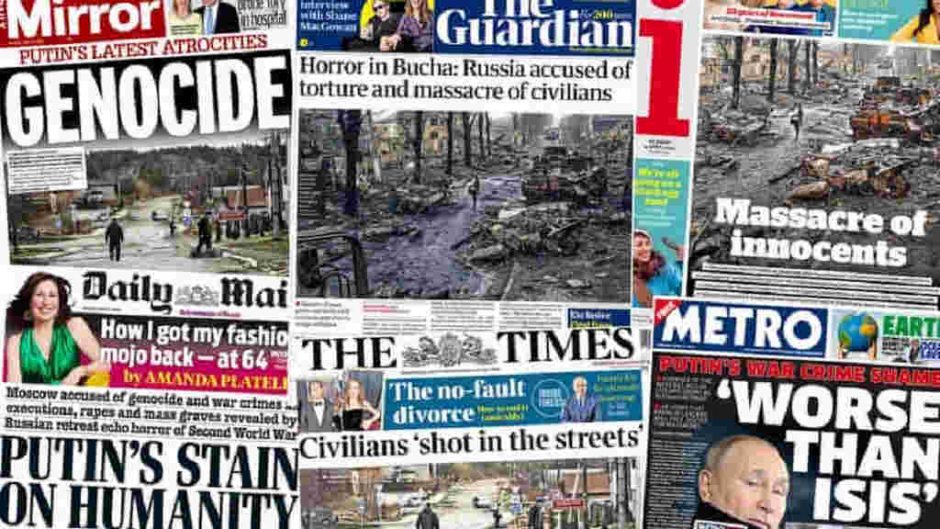 Yesterday, newspapers worldwide splashed images of dead Ukrainian civilians in the streets of Bucha, a town in Ukraine near the capital Kyiv. Allegedly, four hundred and ten dead bodies were found in Bucha. The graphic images were coupled with emotive and accusatory headlines (ref. 1) such as “Genocide”, “Massacre of Innocents”, “Civilians shot in the streets”, “Putin’s stain on humanity”, “Worse than ISIS”.

Russia has categorically rejected the allegations about Bucha (ref. 2), questioning the veracity of the images.

I was going to let this go, because it is not my interest to engage in the day-to-day propaganda contest of this conflict between Ukraine and Russia. On many matters, one side says one thing, and the other side says something else.

It is a cliche that the first casualty of war is the truth.

My remit is the larger spiritual war between God and Satan, a fight for souls. So, I would have let this pass.

But then, I noticed, Yair Lapid, the foreign minister of Israel, has just spoken out against Russia, calling Bucha a “war crime” (ref. 3), toeing the line of the west. At the same time, Avigdor Lieberman, another Israeli politician, has refused to blame Russia. He points out that both sides accuse each other of committing the atrocity of Bucha (ref. 4). For his part, Naftali Bennett, the prime minister of Israel, has not condemned Russia since the start.

There is also the loaded and biblically relevant soundbite from Ukraine’s foreign minister that “Russia is worse than ISIS” (ref. 5).

For these two reasons, I must weigh in.

Before I do, let me repeat the point that I made earlier: that this war between good and evil will become fiercer and more intense over time. Eventually, there will be total war. That means combatants and civilians will die. When evil people are killed, it is the wrath of God. On the day of the LORD, an entire nation will be utterly annihilated. Besides that, a number of other nations will cease to exist. So, in these last days, a great many people across the world will die. Keep in mind, the time of the end is a time of wrath, or in other words “the days of vengeance”.

Now, to say that Russia, one of the kings of the east, is worse than ISIS is to, in effect, advocate for the side of ISIS and Babylon (ref. Revelation 17:10-11) as opposed to the east, which is precisely the wrong thing to do in these last days.

And the third angel followed them, saying with a loud voice, If any man worship the beast and his image, and receive his mark in his forehead, of in his hand, The same shall drink of the wine of the wrath of God…

More to it, to fight in battle against God, who is the LORD of hosts, is to invite death and eternal damnation.

To all whom it may concern, now, more than ever, one must repent, and seek the LORD.

Seek ye the LORD, all ye meek of the earth, which have wrought his judgment; seek righteousness, seek meekness: it may be ye shall be hid in the day of the LORD’s anger.

Now, more than ever, one must make peace with God, before it is too late.

Fury is not in me: who would set the briers and thorns against me in battle? I would go through them, I would burn them together. Or let him take hold of my strength, that he may make peace with me; and he shall make peace with me.

Now, more than ever, it is important to figure it all out, and tell good from evil.

So, about Bucha: Ukraine alleges Russia committed atrocities against civilians in the town of Bucha, just before the Russian army unilaterally withdrew from the area; but militarily and logically, this is nonsense. Why would a withdrawing army do something like this?

It is one thing for civilians to die collaterally when an area is being invaded. It is quite another for civilians to be killed in cold blood before an area is vacated. Even the arrest and execution of partisans who have fought against an army is logical from a military standpoint because partisans are belligerents. What is more, a partisan that kills a soldier on the opposing side, either with a gun or a poisoned pie, is actually a murderer and a criminal, and should be treated as such. However, this thing that allegedly happened in Bucha, if it happened the way Ukraine says it did, would have been pointless. Such a thing would only serve as a propaganda win for Ukraine.

We know, in Kherson, Russia is using stun grenades to disperse demonstrations (ref. 6). That is evidence that Russia has been careful with civilians.

Further, according to the Russian Ministry of Defence, Russia left Bucha on 30 March. The next day, on 31 March, the mayor of Bucha, smiling, confirmed on video Russia’s withdrawal from the town (ref. 7). This video was shown on Ukrainian TV on 1 April. The mayor is clearly a Ukrainian patriot, yet, notice, there is no mention of any dead bodies in the streets of Bucha, or of any atrocity committed by the Russians.

Furthermore, there is a video, dated 30 March, of armed Ukrainian soldiers or police sweeping across Bucha, making sure that the town was clear of Russians. In this video, again, there are no corpses in the streets (ref. 8).

Further yet, there is the following from 2 April about Ukraine’s special forces in Bucha clearing and cleaning up the town of Russian saboteurs and collaborators (ref. 9), which are their very own words.

Further still, some pundits have found footage of Azov in Bucha, posted by Korotkikh of Azov on 3 April, titled “the Boatman Boys in Bucha”, where one armed Ukrainian soldier asks another, “The guys are without blue bands over there. Can I shoot them?” To which, the other replies, “Try” (ref. 10).

Speaking of the Azov battalion, there is evidence that, a few days ago, Azov tortured and killed a girl in the basement of a school in Mariupol, branding her body with a Nazi swastika (ref. 11). A Ukrainian advisor to the president, Arestovich, tried to argue that Russia instead did this, and in Gostomel (ref. 11).

There is also the fact that many of the individuals executed in Bucha had white armbands (ref. 12), which is a pro-Russia signal.

In Kherson, for instance, Russian soldiers have been seen wearing white armbands (ref. 13).

So, more likely than not, this thing that Russia allegedly did in Bucha was actually done by Ukraine: that is to say, certain Ukrainian civilians were executed after Russia had left because these Ukrainians were thought to be Russian collaborators and sympathisers. Then, Ukraine gathered the dead, and staged the scene just for the press. Therefore, this was a false flag psyop.

This thing that Ukraine has done for propaganda is perhaps second only to America’s staged moon landing – the Hollywood stunt that inspired the 1977 film “Capricon One”.

Indeed, America could not do rocket science if its life depended on it. Long ago, America had to resort to recruiting a Nazi to get its space and ballistic missile program going.

What they are now doing to Russia, they did a few years ago to China regarding the origin of Covid-19, “kung flu”. In the not too distant future, it is Bible prophecy that they will do the same, if not worse, to Israel (ref. Matthew 10:22).

It is Satan’s nature to falsely accuse.

Blessed are ye, when men shall revile you, and persecute you, and shall say all manner of evil against you falsely, for my sake.