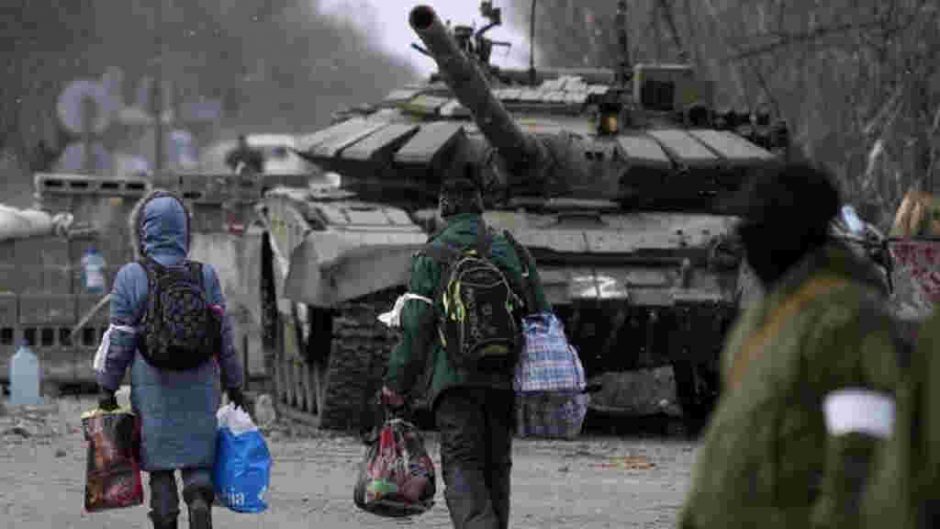 Mariupol, a city in southeastern Ukraine, has been conquered by the Russian Armed Forces and by volunteers from the Donetsk People’s Republic. Some of the difficult block-by-block and building-by-building fight was carried out by Chechen special forces. Significantly, the notorious Azov Battalion of Ukraine has been defeated.

The Azov Battalion, more recently known as The Azov Special Operations Detachment, is an openly Neo-Nazi military group, whose emblem is “the Wolfsangel”, an ancient German runic symbol that was adopted by certain divisions of Heinrich Himmler’s Schutzstaffel during WWII.

The headquarters of the Azov Battalion was situated in the city of Mariupol, which is near the Sea of Azov. A few days ago, that location was stormed by Russia (ref. 1).

To celebrate the victory, the flags of the Russian Federation and the Donetsk People’s Republic were raised at the site, while Russia’s national anthem was played aloud (ref. 2).

Behold, as the Bible prophesies, Russia is “conquering”!

And I saw, and behold a white horse: and he that sat on him had a bow; and a crown was given unto him: and he went forth conquering, and to conquer.

Just because the rider of the white horse with the bow goes forth conquering and to conquer does not mean he must be the Antichrist. Rather, as I have explained, his crown – in Greek “stephanos”, a crown of victory – means he must be for Christ. Those who want the world as it is now to not come to an end are for Satan (ref. 1 John 5:19, Revelation 17:18).

One particular Ukrainian who was there, Vasily Prozorov, a former officer of the Security Service of Ukraine – and remember, Ukraine was quite different before Maidan 2014 – was elated when he took down the signpost of the HQ of the Azov Battalion in Mariupol, saying he has waited eight years for this moment (ref. 3).

Generally, the residents of Mariupol are glad that the Azov Batallion and another group called the Right Sector have been defeated (ref. 4, 5). They were “madmen”, “homicidal maniacs”, “death squads”, “worst than the fascists (of WWII)”. Azov used the people of Mariupol as “human shields”. They “seized children and cars”, to prevent residents from leaving. They even shot at individuals who did attempt to make a run for it towards Russian lines. They used Ukrainian tanks to blow up and ruin residential buildings, to make it seem as if the Russians were firing indiscriminately, and this happened before the armed forces of Russia and the DPR entered the city. Apparently, the Azov Battalion also fired at elements of the Ukrainian army that attempted to retreat. So, at times in the besieged city, there were “shoot-outs” between these two.

The Azov were such a threat to the civilian population of Mariupol that, as the battle raged on, in certain parts of the city, the Russian Armed Forces had to evacuate and transport civilians including children using armoured vehicles (ref. 6).

Now, notice in the footage some of the children are wearing white armbands.

This is something I brought up the other day when I covered Bucha. Apparently, soldiers of the Russian Armed Forces in Ukraine wear a white armband and a white leg-band. By contrast, Ukrainian soldiers and foreign fighters wear a blue or sometimes yellow armband. Because both sides are in military fatigue, I suppose, the armbands and leg-bands help distinguish one side from the other.

That said, Ukrainian civilians who are pro-Russia also wear white armbands. I suppose they do so to signal or to express solidarity.

This explains why several of the individuals who were shot dead in Bucha had white armbands (ref. 7).

The white armbands prove that it was Ukraine rather than Russia that had carried out the massacre of Bucha.

In one clip from a pro-Ukrainian channel, a dead body with a white armband is carried into the view of the camera, and in full view of the foreign press that was invited to gather there on that day by the government of Ukraine. And in that serendipitous moment, the Ukrainian presenter who is rambling on about Russia committing a war crime is suddenly taken aback (ref. 8). He actually stops speaking for a bit, and his facial expression changes, when he notices the white armband.

Anyway, with the fighting in central Mariupol over, Russia has started to provide aid to the residents of Mariupol: a hot meal, and drinking water, and bread, and boxes of oats and canned food (ref. 9). The boxes are distinctly marked with Z, which stands for “For Victory” in Russian. The people are thankful, and they even stop to chat. One woman can be seen making the sign of the cross.

Clasping at straws, the government of Ukraine is now describing Mariupol as “a death camp” and “the new Auschwitz” (ref. 10). This is nonsense, because the civilians of Mariupol are largely Russian speakers and pro-Russia.

In desperation, Ukraine has even resorted to reviving the debunked idea that Russia is operating mobile crematoriums in Ukraine (ref. 11). Before, in 2015, these fictitious things were supposedly being used to hide the death toll of Russian soldiers. Now, in the aftermath of Bucha, these fictitious things are supposedly being used to cover up traces of war crimes. France24 fact-checked the claim of mobile crematoriums in February 2022, and pointed out that the footage used by the UK’s Telegraph back then, which news.com.au has published again, has absolutely nothing to do with the Russian Armed Forces or with Russia’s operation in Ukraine (ref. 12).

At any rate, how is Russia supposed to be the perpetrator of a new Auschwitz when, on the opposing side, the Azov Battalion was filled with actual Neo-Nazis?

The latest about Mariupol is that what remains of Azov has retreated to a steel factory and an industrial zone, Azovstal. There, for some time now, they are being bombarded, day and night, with rockets from Russia’s Grad MLRSs and also artillery shells (ref. 13).

Remarkably, Kyiv sent a number of helicopters to the factory, several times, either to try to exfiltrate someone who should not be found there such as a covert foreign agent, or else to try to rescue Azov high command from their fate. All of the helicopters were shot down by the Russian Armed Forces (ref. 14). Three helicopters were shot down over the Sea of Azov before reaching the factory. The ones that did land at the factory to gather whomever they were trying to rescue were shot down over land as they tried to fly away. At the crash sites, the bodies of some of Azov command were found mangled and charred. A violent and fiery finish!

A number of Azov fighters are still be holed up in Azovstal, refusing to give up. But surrounded and cut off, their end is inevitable.

So, it is fair to say, the battle for Mariupol is over.

Victory for Russia! Glory to Russia!

You see, as scripture foretells, the rider of the white horse with a crown and a bow went forth conquering and to conquer.

I am sure, from now until the dust settles after the final decisive strike on the day of the LORD, there will be more.