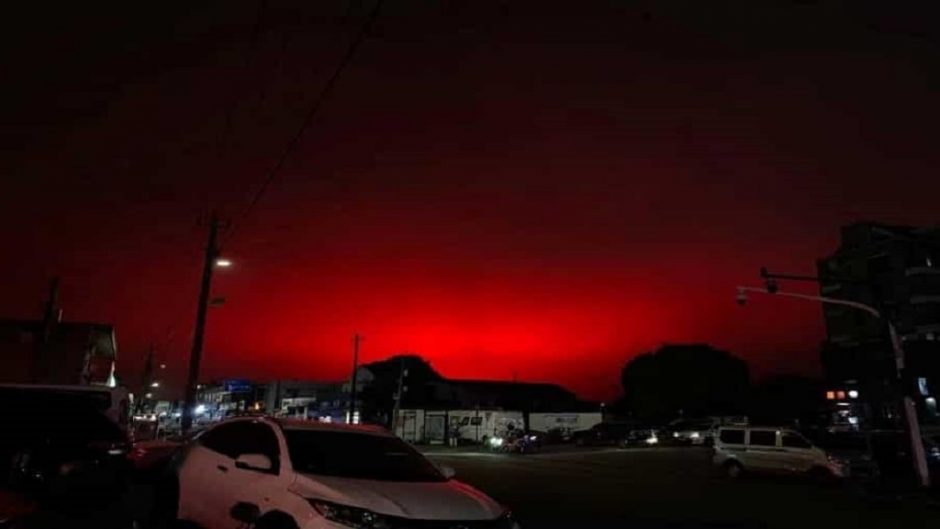 In the east of China, over the port city of Zhoushan, in Zhejiang province, the sky at night, around 8 pm, turned strangely red.

Some suggested that a geomagnetic storm might have caused the rare phenomenon, though Chinese media noted that there were no significant anomalies in solar and geomagnetic activity that day (ref. 1). Others say the red comes from light refraction from ships in the port (ref. 1). Others yet attribute it to certain particles in the air (ref. 2).

Zhoushan happens to be near one of China’s largest cities, Shanghai, so the rare phenomenon became one of the top trending topics on China’s social media, Sina Weibo. The red sky, and apparent crimson tide, prompted some Chinese netizens to think “Armageddon” (ref. 3).

It so happens that Zhejiang province has China’s largest Protestant population. Chinese Protestants read from the Chinese Union Bible, first published in 1919, which is based on the Revised Version 1885 of the KJV. It is not quite the KJV 1769 and 1611, but it is still better than the likes of the NIV and the ESV and the NASB. I suppose, something good did come out of the British being in Hong Kong.

And there shall be signs in the sun, and in the moon, and in the stars; and upon the earth distress of nations, with perplexity; the sea and the waves roaring.

Interestingly, Shanghai is the eastern most point on the Eurasian landmass, at almost the exact same latitude as Jerusalem, 31.7 degrees. This means China is in the far east, at the rising of the sun.

What is more, Zhoushan 舟山 literally means “boat” and “mountain”. Think a navy that is on top of the world, or a powerful navy. The PLA navy has come a long way. Today, in 2022, China fields the largest navy in the world, which includes the most heavily armed destroyers in the world, and also the largest submarine force in the world.

Today, militarily, China is strong. This is because God, who is the LORD of hosts, has given China strength.

Hast thou given the horse strength? hast thou clothed his neck with thunder?

Prophetically, the next seal of the apocalypse to be opened, the one that will take peace from the earth, will involve a horse that is red. And this horse that is red has been given a great sword.

A week or so ago, Beijing ordered a comprehensive stress test of the Chinese economy, in case when hostilities commence America and her allies decide to impose sanctions and trade embargoes (ref. 4).

So, this is happening.

When the time is right, Satan will lose all power in the sea!

In that day sing ye unto her, A vineyard of red wine.