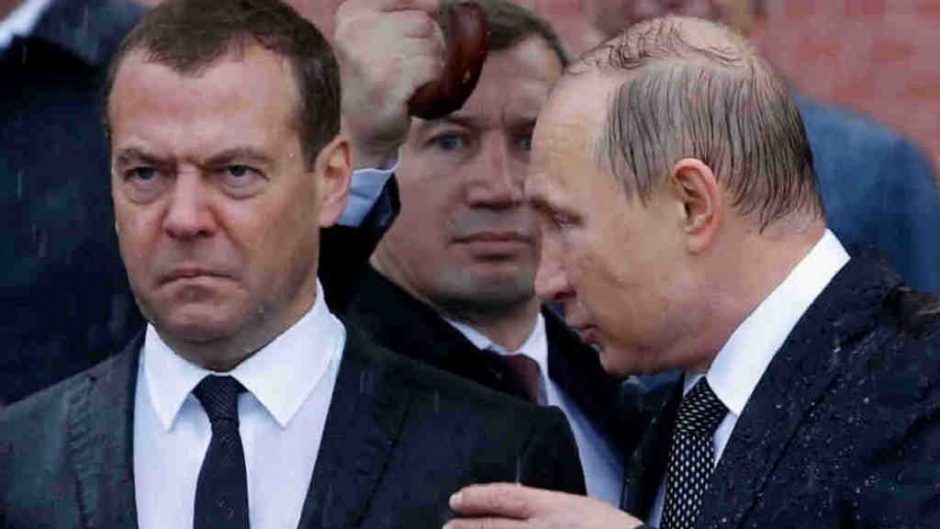 In a recent interview on Al Jazeera TV, while on the topic of US-led sanctions against Russia for the Ukraine war, former Russian President and current Deputy Chairman of Russia’s Security Council Dmitry Medvedev spoke about, of all things, Bible prophecy. He brought up “the horsemen of the Apocalypse” (ref. 1): the first four seals of Revelation 6.

This is what he said verbatim (ref. 2): “One can have different attitudes to it, one can believe that the horsemen of the Apocalypse are already on their way and all hope is in Almighty God. However, one can still try to tone down this international situation.”

First of all, it is clear in Revelation 5-6 that it is the Son of man Jesus Christ who opens the seven seals, including the first four.

… behold, the Lion of the tribe of Juda, the Root of David, hath prevailed to open the book, and to loose the seven seals thereof.

In other words, it is the will of God that, at the appointed time, the four horsemen of the Apocalypse do their thing.

The opening of the seventh seal begins the seven trumpets and vials of the wrath of God. The seventh trumpet, which is also the seventh vial, heralds the day of the LORD, which is the Second Coming of Jesus Christ and the start of the kingdom of God.

I was the first, and right now apparently still the only Bible prophecy watcher, to explain that Russia’s war in Ukraine, which began in February 2022, marked the opening of the first seal.

All true Christians welcome the opening of the seven seals. After all, the LORD’s prayer asks of God the Father: “Thy kingdom come. Thy will be done.”

So, it is a curious thing that someone would want to prevent or delay the horsemen of the Apocalypse, let alone someone in Russia, the nation of the first seal, the white horsemen with a bow and a crown.

And I saw when the Lamb opened one of the seals, and I heard, as it were the noise of thunder, one of the four beasts saying, Come and see. And I saw, and behold a white horse: and he that sat on him had a bow; and a crown was given unto him: and he went forth conquering, and to conquer.

The end is a time of military glory for Russia, a glory foretold in the national anthem of Russia.

Even when this war goes nuclear and involves the superpowers, Russia will defeat the USA. It is Bible prophecy that every one of Babylon’s bows shall be broken by God (ref. Jeremiah 51:53-56).

Mutually assured destruction is a myth spread by America. Both Russia and China will survive and prosper as nations.

But to prosper, the world as it is now, and the USA especially, must come to an end.

China, right now, is in an unsustainable, losing position. Babylon’s bioweapon Covid-19 will surely destroy China either demographically or economically. War is the only way forward!

Anyway, back to Russia and Medvedev.

I researched Medvedev, and came across a Radio Liberty article about him, which describes Medvedev as “a hope of Russian Liberals and the West” (ref. 3). It is well known that Radio Liberty or Radio Free Europe is a front for America’s CIA.

It is also telling that some of Medvedev’s associates have voiced opposition to the war in Ukraine (ref. 3).

Now, I am not saying that Medvedev is connected to, or in communication with, the CIA, or even that he is necessarily among those in Russia whom Russian President Vladimir Putin has described as “a fifth column of national traitors”.

What I am saying is that, once, the CIA somehow identified Medvedev as a potential candidate to serve America’s interests.

What I am talking about is spiritual wickedness – that is to say, demons.

Because the CIA recruits from the secret society of Skull and Bones, some of them actually talk to demons and serve the devil.

From wikipedia, I found out that, in his youth, Dmitry Medvedev was into British hard rock, specifically Black Sabbath, Pink Floyd, Led Zeppelin and Deep Purple. All of these bands have occult messages in their music.

Every Christian knows, the sabbath is meant to be holy. To describe the sabbath as black is blasphemy.

Also, when played backwards, Pink Floyd’s “Empty Spaces” sounds “Congratulations. You have just discovered the secret message.” This is what is known as backmasking.

Led Zeppelin’s “Stairway to Heaven” is another famous example of backmasking. This song backwards sings among other things, “Whose power is Satan. He will give you 666.”

Then, there is Deep Purple’s Stormbringer. It is said, this song contains a segment from the 1973 film “The Exorcist”, a backwards dialogue of the possessed character played by Linda Blair.

Though I am not sure, this sort of music could have a hypnotic effect. Over time, music with backmasking might put the listener under the adversary’s spell.

Perhaps, Dmitry Medvedev has become a certain way because of his fondness for British hard rock music.

2. TASS (3 June 2022), “World community should not wait for horsemen of Apocalypse but negotiate, says Medvedev”, tass.com

3. Todd Prince (24 April 2022), “Once A Hope Of Russian Liberals And The West, Medvedev Beats A Bellicose Drum To Stay Safe, Relevant”, rferl.org