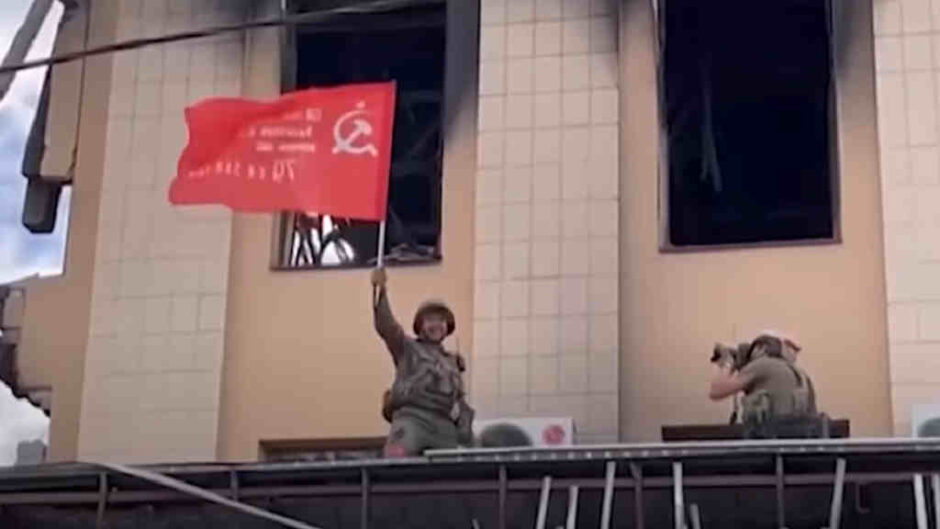 Today, Lysychansk, the last city in Luhansk held by Ukraine, was taken by Russia (ref. 1).

Today, the red standard of the hammer and the sickle, Russia’s military victory banner, was raised over Lysychansk’s main administrative building (ref. 2).

This comes after last week’s success in Severodonetsk. So now all of Luhansk has been won.

What is more, the path to the Dnieper river is now wide open.

It turns out overwhelming firepower from Russian artillery and thermobaric multiple launch rocket systems has been a decisive factor (ref. 3).

This is something I brought up very early on in the war for Ukraine, because it is written in scripture that the armies on the side of the LORD of hosts are to fight a certain way.

Before their face the people shall be much pained: all faces shall gather blackness.

In fact, no fortified position can survive a weapon system such as Russia’s thermobaric MLRS.

Draw thee waters for the siege, fortify thy strong holds: go into clay, and tread the morter, make strong the brickkiln. There shall the fire devour thee; the sword shall cut thee off…

Later on, China also will surely fight this way.

Remember, fire is the signature weapon of God, and God is the LORD of hosts.

It is also not for nothing that Russia’s victory banner is a red flag.

Wherefore art thou red in thine apparel, and thy garments like him that treadeth in the winefat? I have trodden the winepress alone; and of the people there was none with me: for I will tread them in mine anger, and trample them in my fury; and their blood shall be sprinkled upon my garments, and I will stain all my raiment. For the day of vengeance is in mine heart, and the year of my redeemed is come.

And more to it, it is a flag with a sickle and a hammer.

The sickle may well represent farmers, and the hammer workers.

And I looked, and behold a white cloud, and upon the cloud one sat like unto the Son of man, having on his head a golden crown, and in his hand a sharp sickle.

The Bible explains, God will punish up to the third and fourth generation of them that hate him.

Thou shalt have none other gods before me… Thou shalt not bow down thyself unto them, nor serve them: for I the LORD thy God am a jealous God, visiting the inquity of the fathers upon the children unto the third and fourth generation of them that hate me, And shewing mercy unto thousands of them that love me and keep my commandments.

It is well documented that, during WWII, Ukrainian partisans did horrific things, alongside Germany’s Einsatzgruppen, which were anti-Jewish death squads led by Himmler’s SS. In 1941, at Babi Yar, a ravine near Kyiv, over thirty thousand civilian Jewish men, women and children were rounded up and summarily executed- the first of Nazi Germany’s “holocaust by bullets”.

It is also widely known by now that Himmler and his SS were into the occult, which means witchcraft and the worship of demons.

So, essentially, these are devil worshippers and their descendants that are being punished.

Remember, the time of the end is a time of God’s wrath!

… the LORD will take vengeance on his adversaries, and he reserveth wrath for his enemies. The LORD is slow to anger, and great in power, and will not at all acquit the wicked…

You see, those who are evil cannot win. Indeed, their downfall has already begun!

Most would agree that Nazism should have perished long ago. Had it not been for America’s Operation Paperclip, and Reinhard Gehlen in West Germany, and closet fascists inside the Vatican, and even the Red Cross, which brings to mind the cross of the Templars, the precursor to Freemasonry, Nazism might have been a thing of the past.

So now, the score must be settled.

There is no peace, saith the LORD, unto the wicked.

After all, vengeance is the LORD’s, and now is the time of wrath.