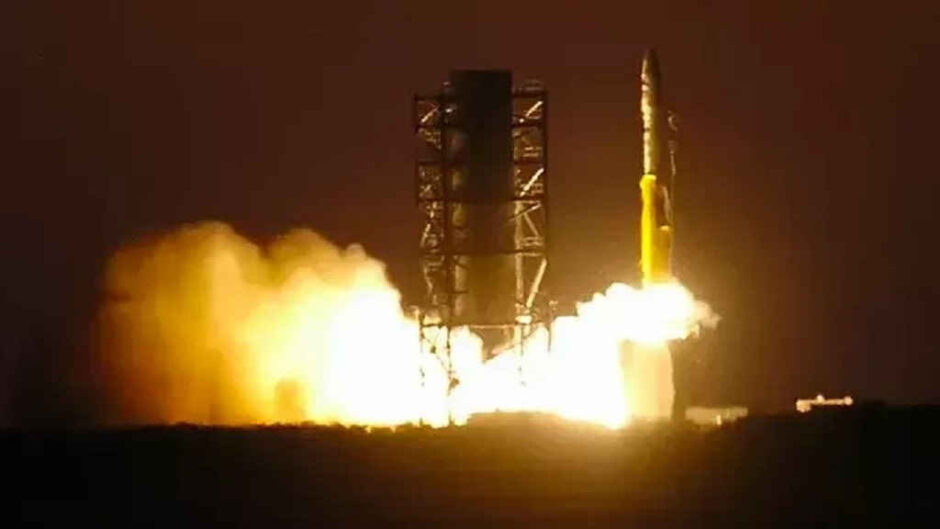 A test flight at Vandenberg Space Force Base of America’s future Mk21A nuclear ICBM re-entry vehicle failed yesterday. It failed because the Minotaur II+ rocket that was to lift the new re-entry vehicle into space exploded eleven seconds after launch (ref. 1).

The Mk21A is to be fitted to America’s future LGM-35A Sentinel ICBM, which is also under development. All this is part of an effort to develop a new ground-based nuclear ICBM to replace the ageing Minutemen III.

So, the question is, was the explosion of the Minotaur II+ rocket an accident, or an act of God?

It is Bible prophecy that, in these last days, when Babylon mounts up to heaven against her enemies, God will send unto her spoilers, meaning angels of God, and consequently every one of Babylon’s bows will be broken. Every single one!

Though Babylon should mount up to heaven, and though she should fortify the height of her strength, yet from me shall spoilers come unto her, saith the LORD… Because the spoiler is come upon her, even upon Babylon, and her mighty men are taken, every one of their bows is broken: for the LORD God of recompences shall surely requite.

This means, America is well behind in the race for hypersonic weapons, despite the Pentagon making the programme a priority. Last year, China successfully tested a hypersonic weapon that flew around the globe before hitting its target. And Russia has now used hypersonic weapons in actual combat, against Ukraine – both the Iskander and the Kinzhal.

In other interesting news, there is talk in Russia about taking back Alaska from America. The speaker of Russia’s State Duma threatened to “claim back” Alaska if America continues to seize Russian assets to punish Russia for the war in Ukraine (ref. 3).

While this might have been mere talk, it is not far-fetched. Alaska might be taken during a conflict for the Arctic.

There is even scripture that prophesies an invasion of at least some part of the United States of America (ref. Jeremiah 51:14).

The LORD of hosts hath sworn by himself, Surely I will fill thee with men, as with caterpillers; and they shall lift up a shout against thee.

It follows that, if Russia were to conquer Alaska, there would be no need to nuke it, and so Canada could be spared the fallout.

Continental USA, however, will be surrounded by mighty angels, and they will fan a wind from all sides that will keep the nuclear fallout from going elsewhere (ref. Jeremiah 51:1-2).

Thus saith the LORD; Behold, I will raise up against Babylon, and against them that dwell in the midst of them that rise up against me, a destroying wind; And will send unto Babylon fanners, that shall fan her, and shall empty her land: for in the day of trouble they shall be against her round about.

It might be that it will be the island of Guam or the like that will be invaded, so that means China instead of Russia. Then again, North Korea might nuke Guam with its brand new ICBM.

The Bible prophesies, everyone with a bow that is against Babylon will fire. Not one arrow will be spared! That means, North Korea must also fire at some part of America.

Put yourselves in array against Babylon round about: all ye that bend the bow, shoot at yer, spare not arrows: for she hath sinned against the LORD.

It certainly won’t be Hawaii that will be invaded. Hawaii should be destroyed when the Pacific ring of fire explodes.

Now, returning to the idea of a Russian invasion of Alaska. If Alaska were to become Russian at some point, that means good Americans could go there ahead of time, and so one day choose to become Russian, or else seek temporary refuge there until the war is over.

To do this, once there, you must prep and live off the grid, so as to avoid having to take the mark of the beast, the forthcoming US currency that will replace the US dollar. For if you take the mark which the false prophet will push, or if you worship the beast, you will be damned (ref. Revelation 14:9-11), even if you survive the war. If and when the invasion happens, and once you are within Russian lines, it is over and you can buy and sell with the rouble.

This is something that American Jews and also would-be Christians could do.

Jews must find a way to endure and survive the war. After the day of the LORD, Jews will be called to return to the promised land, the newly established kingdom of God.

About nuclear weapons, it is conceivable that Britain will lose the entire Royal Navy trying to protect Britain’s Trident SLBMs. Those Tridents are technically American weapon systems, and so it should be no surprise that the subs that carry them are fair game. It is Bible prophecy that all the ships of Tarshish shall be humbled!

During WW2, Britain hunted down Germany’s Bismarck, and left nothing to chance regarding the fleet of Vichy France in Algeria.

In this forthcoming world war, Satan will lose all power in the sea (ref. Isaiah 27:1).

About France in these last days, I should say, the other side does not have France. They might think they do, but actually they don’t. I have found scripture, a Bible prophecy, that implies France will be against the Antichrist. It is too soon to point it out. Suffice it to say for now that France has not committed its nuclear arsenal to NATO.

In due time, Britain and France will return to the fold, becoming Christian nations again.

The United States of America, however, cannot be healed.

O thou that dwellest upon many waters, abundant in treasures, thine end is come, and the measure of thy covetousness.

For the world as it is now must come to an end.

And they shall not take of thee a stone for a corner, nor a stone for foundations; but thou shalt be desolate for ever, saith the LORD.