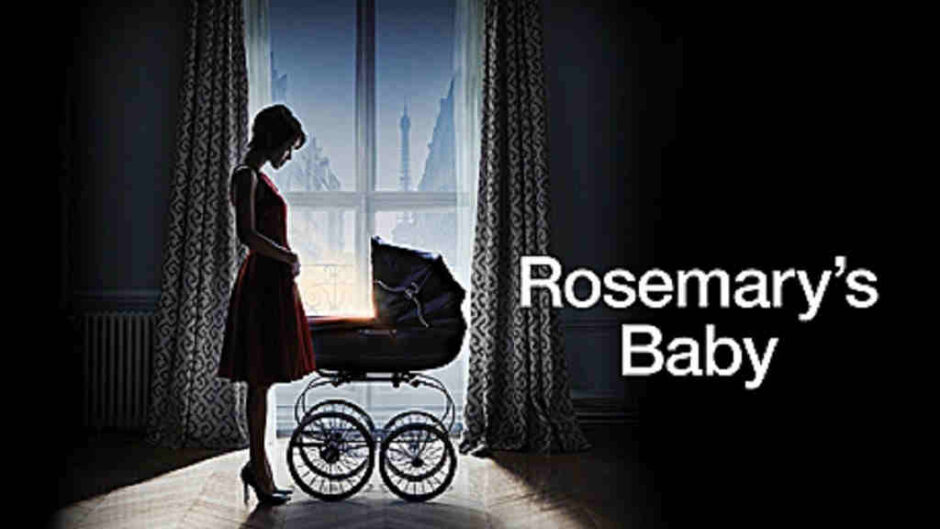 “Rosemary’s Baby” is a 1967 novel about Satanists and witchcraft in New York by the late American writer Ira Levin. Though Levin was brought up Jewish, he declared himself an atheist, telling an interviewer in 2002 that he felt guilty that Rosemary’s Baby had led to stories such as “The Exorcist” and “The Omen”, which put the spotlight on Satan, whom he says he does not believe is real.

In 1968, Roman Polanski, a film director of Polish and French origin, made a film based on Levin’s novel. It was Polanski’s Hollywood debut.

Mia Farrow, who married Frank Sinatra in 1966 and wore an extremely short haircut even then, played Rosemary in the film.

Sinatra divorced Farrow in 1968 for her decision to be in the film Rosemary’s Baby.

At the time of filming Rosemary’s Baby, Polanski was married to an upcoming Hollywood model and actress, Sharon Tate.

In 1969, Tate and some of her friends were brutally murdered by the Manson Family cult – hippies high on drugs, and therefore zombies for the devil.

Apparently, one of the zombie-like attackers said, “I’m the devil; I’m here to do the devil’s business” (ref. 1).

Tate was eight and a half months pregnant when she was killed.

Charles Manson was a deranged, long-haired cult leader, with a Nazi swastika branded on his forehead, who grew his cult, which he called his family, through the use of the drug and hallucinogen LSD.

Struck by grief after Tate’s murder, Polanski himself would turn increasingly to the drug LSD, a terrible mistake.

In 1977, now under the hallucinogenic influence of Satan, Polanski did something that would lead to his arrest for the sexual assault of a thirteen-year-old, Samantha Geimer. That day, she had been doing a photoshoot for him at the home of Jack Nicolson. Before he was sentenced, Polanski fled back to France, and today remains a fugitive from the USA.

The murder of Sharon Tate and the disturbing episode of Samantha Geimer that made Polanski persona non grata to the USA were no doubt a curse from the devil (ref. 2).

Even John Lennon, who was friends with Mia Farrow, was shot dead at the Dakota Apartment building in New York, which was the setting for Rosemary’s Baby. Mia Farrow was with the Beatles during their 1968 stay in India, which inspired their “White Album”, which contains the song Helter Skelter. At the scene of the murder of Sharon Tate, the Manson Family wrote on the wall in blood “Healter Skelter”.

But this time, the story is set in Paris, France, rather than New York, USA.

This means, the Satanists that trouble Rosemary are French instead of American.

While Rosemary’s Baby is a story about a Faustian bargain with the devil for money, it is also about the coming Antichrist.

This was confirmed in 1997, when the author Ira Levin finished his sequel to Rosemary’s Baby, titled “Son of Rosemary”. In the sequel, Rosemary’s son is now 33 years old, and he is to become “the Antichrist” who is to usher in the end of the world. Levin’s 1997 novel was never well received, nor was it ever made into a film, which would have given more publicity to the idea of an American Antichrist.

For those who don’t know, the actual Antichrist is “the Assyrian”, an Islamist from Nineveh, Iraq (ref. Nahum 1:11). But Mystery Babylon will also produce an Antichrist in these last days, namely the false prophet (ref. Revelation 13:11).

The false prophet is the beast with two horns like a lamb that comes up “out of the earth” as opposed to the sea, the same who misleads the kings of the earth in the last days.

It seems to me that the devil would rather the world think the USA is not Mystery Babylon, and that the Antichrist, also known as the little horn, arises in Europe.

On Youtube, there are many American preachers that still speak of a European Antichrist, the leader of an imaginary, renewed Roman Empire.

Even the fashioning of the EU’s parliament building in Strasbourg to evoke the tower of Babel is a part of Satan’s elaborate deception.

In this interpretation of Bible prophecy, there is no danger from ISIS or Islam.

While researching the curse of Polanski’s 1968 movie Rosemary’s Baby, I learnt that another movie “The Omen”, made in 1976, was also cursed.

Like Rosemary’s Baby, The Omen suggests the Antichrist, or at least an Antichrist, namely the son of perdition, will be an American.

It is said, unnatural things happened during the making of the 1976 film (ref. 3). Planes carrying the cast and crew were hit by lightning on several occasions. One plane that was to carry the film crew was brought down by birds. A possessed lion attacked and killed the guard of the zoo where they had been filming. The special effects guy who was responsible for the beheading scene in the movie suffered a car accident that caused his girlfriend to be beheaded.

One executive reflected, “The devil didn’t want the picture to be made.” In other words, The Omen was cursed.

… Be not afraid of them that kill the body, and after that have no more that they can do. But I will forewarn you whom ye shall fear: Fear him, which after he hath killed hath power to cast into hell…

And he said unto me, What seest thou? And I answered, I see a flying roll; the length thereof is twenty cubits, and the breath thereof ten cubits. Then said he unto me, This is the curse that goeth forth over the face of the whole earth [the lands of the beast of the earth]: for every one that stealeth shall be cut off as on this side according to it; and every one that sweareth shall be cut off as on that side according to it. I will bring it forth, saith the LORD of hosts, and it shall enter into the house of the thief, and into the house of him that sweareth falsely by my name: and it shall remain in the midst of his house, and shall consume it with the timber thereof and the stones thereof.

3. “The Omen: Curse or Coincidence?”, youtube.com/watch?v=zmsNWmKqsAY