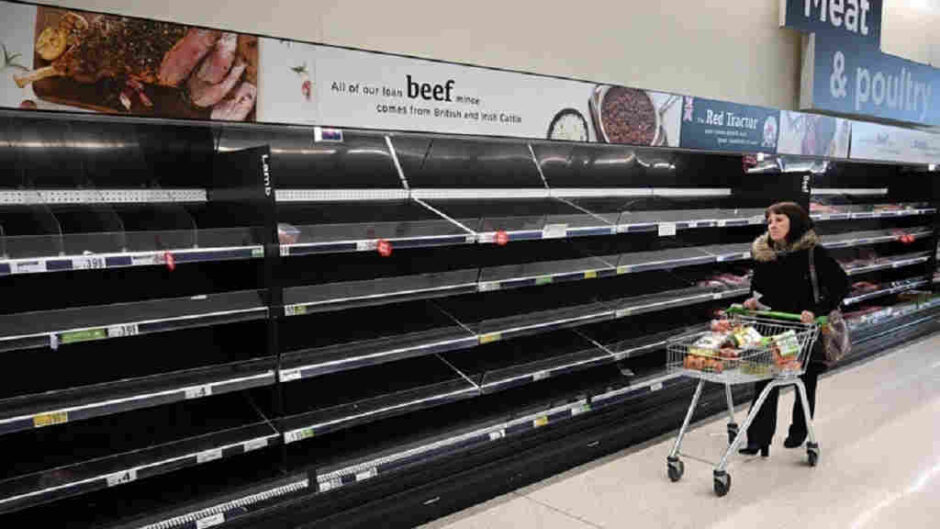 It is Bible prophecy that, at the time of the third seal of the apocalypse, a day’s wage will only afford a measure of wheat or three measures of barley (ref. Revelation 6:5-6).

Inflation that leads to hyperinflation is something I have pointed out for a while now, because the prophesied mark of the beast (ref. Revelation 13:16-17) will be a new currency of the nation that is Mystery Babylon, the land of the forthcoming false prophet. And the only way to forcibly introduce a new currency is to destroy the existing one. And the way to do that is to induce hyperinflation. This explains America’s obsession in recent years with quantitative easing, with Keynesian fiscal stimulus and with the nonsense of Modern Monetary Theory, MMT.

Decades ago, Milton Friedman correctly figured out through several empirical studies that “Inflation is always and everywhere a monetary phenomenon”.

The main reason there is inflation across much of the world is because in recent years central banks – everyone from the Reserve Bank of Australia to the European Central Bank to the Bank of England – have followed suit and embraced the insanity of quantitative easing.

Some central banks have even abandoned their charter of inflation targeting to include the objective of boosting employment. This is another economic heresy being spread by the US Federal Reserve.

Sound economics teaches that while insufficient money will contract an economy (eg. the Great Depression of the 1930s), excessive money will not expand an economy but rather inflate it. Ideally, the amount of money in an economy should match the amount of goods and services in that economy. This is achieved through the policy of inflation targeting.

Besides duping the world into accepting a flawed economic theory, which is now apparent for all to see, America is also exporting inflation. As America inflates, it follows that American-made goods across the world are pushing prices up. After all, a business will set the price of its product at any amount that it thinks it can sell it at.

Now, inflation from America, which is happening because of the coming mark of the beast is one thing. Inflation as it pertains to food is another. The former is from Satan. The latter is from God.

The mark of the beast is a means for the devil to destroy hundreds of millions of souls. So hyperinflation in Babylon is entirely a thing of the devil.

And there followed another angel, saying, Babylon is fallen, is fallen, that great city, because she made all nations drink of the wine of the wrath of her fornication. And the third angel followed them, saying with a loud voice, If any man worship the beast and his image, and receive his mark in his forehead, or in his hand, The same shall drink of the wine of the wrath of God… and he shall be tormented with fire and brimstone… for ever and ever…

But the third seal, which speaks of price inflation of food and food shortages, is from God. This seal is not only opened by Jesus Christ, “the Lamb” and also “the Lion of the tribe of Juda” (ref. Revelation 5:5-7), as all seven are, but the “voice in the midst of the four beasts” (ref. Revelation 6:6) is the voice of God himself.

The four beasts are explained in Revelation 4. These are four angels, each with six wings and full of eyes, and they stand around the throne of God in heaven and give glory and honour and thanks to him (ref. Revelation 4:8-9).

And the four beasts had each of them six wings about him; and they were full of eyes within: and they rest not day and night, saying, Holy, holy, holy, Lord God Almighty, which was, and is, and is to come.

So, the voice in the midst of the four beasts must be that of God himself, the one who sits on the throne in heaven.

What is more, the same voice also says, “and see thou hurt not the oil and the wine”. In my opinion, the oil refers to the anointed, meaning Christians and Jews.

For God hath not appointed us to wrath, but to obtain salvation by our Lord Jesus Christ

And the wine refers to the winepress, meaning at least China and Russia. Interestingly, China has been stockpiling grain in recent years (ref. 2), and Russia happens to be a net exporter of grain.

Now, it follows logically that “see thou hurt not” the oil and the wine means hurt everyone else!

This brings me to Turkey’s bizarre, self-inflicted hyperinflation. In Turkey not long ago, President Erdogan suddenly decided that his grasp of economics exceeded that of everyone else. Over the course of four years, Erdogan fired three central bank governors, and insisted on extremely low interest rates even in the face of worsening inflation. As a result, Turkish inflation reached 80% in June 2022, and food prices in particular have jumped 175% (ref. 3).

You see, angels as well as demons can do Jedi-like mind tricks.

In the Netherlands, a quest to reduce the emissions of gasses to tackle the so-called threat of climate change has prompted the government to restrict substantially the amount of livestock and restrict the use of fertilizer in farming (ref. 4). This means less farming overall, and consequently less domestically produced food in the Netherlands.

Likewise, in Canada, as part of its emissions reduction plan, the government is going to tariff fertilizer, which again means either food there will become more expensive or there will be less food (ref. 5).

Apart from all that, there are droughts and heatwaves. As I have said, these weather phenomena are from God. Even the two witnesses, when they are here, shall smite the earth with drought and all manner of extraordinary weather as often as they will.

And I will give power unto my two witnesses, and they shall prophesy… These have power to shut heaven, that it rain not in the days of their prophecy… and to smite the earth with all plagues, as often as they will.

In America, drought and recurring heatwaves have prompted cattle farmers to give up and sell off their livestock (ref. 6). Grass has become scarce and hay too expensive. Farmers say, by next year, there will be a shortage of beef, and beef prices will rise.

Not only that, apparently, in recent times, a number of food processing plants in America were ruined by fire (ref. 7). At two plants, a plane crashed near or into the building, creating a fire. At other plants, faulty equipment sparked the fire. Again, this means ultimately less food in supermarket aisles.

There has also been recurring crop damage across much of the world due to fires, or freezing, or floods, or locusts and the like.

Recently, the United Nations officially warned that several countries are facing an impending food crisis and possibly even mass starvation.

The New York Times, for its part, has started to talk about cannibalism, saying there is a time and place for it, and that time might be now (ref. 8). Whether the article is serious or not is anybody’s guess.

As you may know, “cannibal” literally means “priest of Baal”, and so the idea of eating human flesh and drinking human blood is from the devil. This is why the serial killer “Hannibal”, which means “grace of Baal”, is a cannibal, and he is all for “The Silence of the Lambs”, and his protege is someone who embraces the “Red Dragon”.

Anyway, returning to the matter of food shortages, when famine came upon Israel and the lands nearby for seven years, at the time of Joseph, God told Joseph through a dream of Pharaoh to prep and stockpile (ref. Genesis 41:15-36).

And the food shall be for store to the land against the seven years of famine, which shall be in the land of Egypt; that the land perish not through the famine.

For nation shall rise against nation, and kingdom against kingdom: and there shall be famines, and pestilences, and earthquakes, in divers places.

The Bible further warns that the Antichrist, namely the pale horse of the fourth seal, shall kill not only with the sword but also “with hunger” (ref. Revelation 6:8).

In other words, in time, across much of the world – precisely which parts I am not sure – there will be food shortages and even famines.

So now, perhaps, is the time to start to prep. At some point, it might be too expensive to stockpile due to inflation, or else it might be impractical because retailers have decided to impose purchase limits per customer due to shortages.

Those who are under the impression that there will be a pre-trib rapture will learn the hard way that they have been deceived.

Those who are truly Christian – all who understand and actually believe the Word of God – will take precautions and so come under the category of “the oil”, which is not to be hurt by the third seal. After all, to be forewarned is to have an advantage.

Again, hurt not the oil and wine means hurt everyone else.

Never forget, the time of the end is a time of wrath.

3. Tom Joyner (27 July 2022), “Turkey launched an unusual experiment to fight inflation by cutting interest rates. This is how it spectacularly backfired”, abc.net.au

4. Ciara Nugent (29 July 2022), “Farmer Protests in the Netherlands Show Just How Messy the Climate Transition Will Be”, time.com

6. Vanessa Yurkevich (25 July 2022), “Farmers forced to sell their cows as drought conditions worsen across US”, cnn.com

7. Jim Geraghty (6 May 2022), “What’s Really Going On with These Food-Facility Fires?”, nationalreview.com