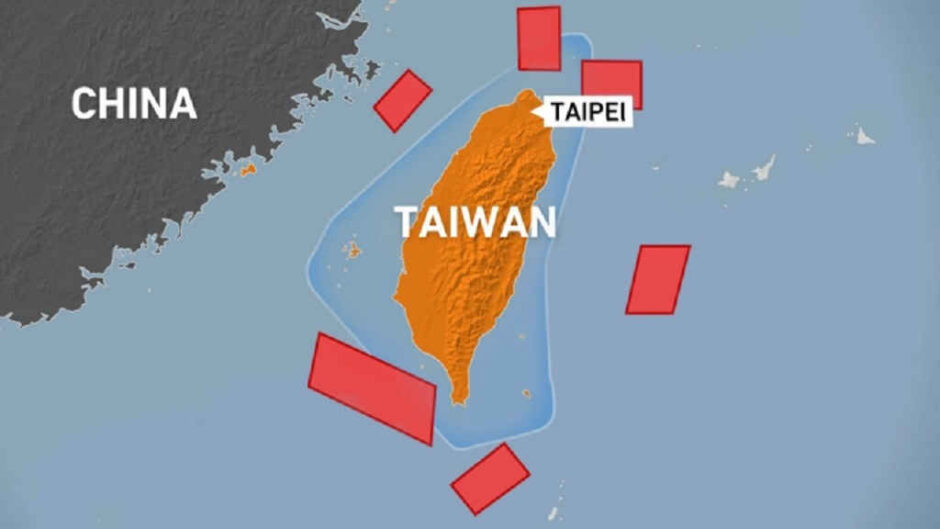 The USA has changed the status quo of Taiwan.

Yesterday, Nancy Pelosi, the speaker of the US House of Representatives – by US law the second in line to succeed the US president after the US vice president – led a congressional delegation on an official visit to Taiwan despite repeated warnings from China not to do so (ref. 1). She met with Taiwan’s president and spoke in Taiwan’s parliament. She even penned an op-ed piece in the Washington Post, wherein she declared the Chinese Communist Party a menace and a threat to the USA (ref. 2).

This provocative act, along with US President Joe Biden’s earlier remarks on at least two different occasions that the US would defend Taiwan militarily has had the effect of changing the status quo.

To begin with, what was the status quo?

Both the USA and China had agreed in principle, even issuing a series of joint communiques, that there is only one China, and the USA would not support Taiwan independence, and cross-strait differences were to be eventually resolved through peaceful means (ref. 3).

Importantly, if Taiwan is not an independent nation but rather is a mere province of China, that means Taiwan has no right to carry out foreign relations separately from mainland China.

Consequently, this visit by Pelosi is in breach of the agreement that was the status quo.

In 1997, Newt Gingrich was given permission by China to land in Taiwan, because there was a rapprochement between the USA and China. There was no such permission this time around.

Secondly, at the invitation of Taiwan’s military, the USA has stationed US marines in Taiwan for some time now, despite publicly lying about it (ref. 4). Under the current Biden administration, the number of US troops in Taiwan has doubled (ref. 4). This is happening in addition to continuing sales of US arms to Taiwan, which serve only to embolden Taiwan away from a peaceful resolution.

As one geopolitical analyst put it, America is attempting to “salami slice” its way into a new reality – in other words, to slowly and subtlety change the status quo.

Oftentimes, most recently at the Shangri La Dialogue 2022, America insists that its policy on Taiwan remains the same, and that America is committed to maintaining the status quo. Yet, again and again, America’s actions reveal otherwise.

This trip by Pelosi has already encouraged British MPs such as Tom Tugendhat to plan a trip of their own later this year (ref. 5).

Once more, this means, a new reality has emerged: Taiwan is now doing foreign relations as if it were an independent nation.

So, in response to this attempt by America to undermine the sovereignty of China, over the next few days, the PLA has arranged to carry out six military exercises around the island of Taiwan. These exercises will “rehearse reunification” and also have the effect of “blockading” the island (ref. 6). This will be a joint blockade, sea assault and land and air combat training that will involve actual ammunition and the use of advanced weapons including the J-20 stealth fighter jet and the DF-17 hypersonic missile.

These exercises are unprecedented in that PLA forces will enter within 12 nautical miles of the island of Taiwan. This will have the effect of negating the median line of the Taiwan strait, and establishing the fact that Taiwan has no claim to 12 nautical miles because the island is a mere province of China. The exercises will also effectively surround and blockade the entire island (ref. 7). What is more, China has said that this sort of thing might become “routine” (ref. 6).

I think, this is a measured and clever move that is commensurate to what America has done. America has tried to realise a new reality for Taiwan, and so now China is doing the equivalent.

Of course, any attempt to challenge China’s claim of the waters around Taiwan will mean armed conflict.

So you see, the opening of the second seal of the Apocalypse is now only a matter of time.

Ever since the incident of the K-Pop singer Chou Tzu Yu in regard to the election of Tsai Ing Wen, which brought to mind the Three Kingdoms era of China, i.e. General Zhou Yu, I have explained that Taiwan would be one of the wars of nations and kingdoms prophesied to happen in the last days.

And ye shall hear of wars and rumours of wars: see that ye be not troubled: for all these things must come to pass, but the end is not yet. For nation shall rise against nation, and kingdom against kingdom…

I think, China has been very patient, always giving the USA the benefit of the doubt, but now finally China’s “eyes are wide open” (ref. 8) and so the time of the second seal is almost here.

The other day, French President Emmanuel Macron warned the west not to humiliate Russia (ref. 9) so that diplomacy would still be possible.

What Nancy Pelosi has done, and now of all possible times, is nothing less than a slap in the face of the People’s Liberation Army of China and in the face of Chinese President Xi Jinping. Three days ago was the 95th anniversary of the founding of the PLA (ref. 10). Furthermore, in this year of 2022, Xi Jinping is to be given a rare third term, and crowned “the People’s Leader” (ref. 11). Not since Mao Zedong and Hua Guofeng has the CCP bestowed such an honour. It would be a tremendous humiliation for any Chinese leader to lose Taiwan, let alone in this auspicious year of 2022, which by the way is the year of the “water tiger”!

So, this throwing down of the proverbial gauntlet cannot go unanswered. And unsurprisingly, to recover Taiwan, China has vowed to “fight to the death” if necessary (ref. 12).

The west might well fear Russia because of Russia’s vast nuclear arsenal, but China is also one of the kings of the east prophesied in the Bible, and in terms of conventional combat power, mark my words, China will be the one that will make the world tremble.

When China musters at full strength for Armageddon, it will be like nothing the world has ever seen. There has never been an army like this; nor will there ever be an army like this again thereafter.

The earth shall quake before them; the heavens shall tremble: the sun and the moon shall be dark, and the stars shall withdraw their shining: And the LORD shall utter his voice before his army: for his camp is very great: for he is strong that executeth his word: for the day of the LORD is great and very terrible; and who can abide by it?

In these last days, China is powerful, both in terms of numbers and military technology, because the LORD of hosts has made it so (ref. Job 39:19).

Napoleon Bonaparte was antichrist (ref. Tolstoy’s War and Peace) and a Freemason. But even he once said, “La Chine est un lion endormi; le jour où elle se réveillera, la terre tremblera.” (China is a sleeping lion; the day she awakes, the world will tremble.)

Well, as of now, China’s eyes are wide open: the lion has awakened!

He paweth in the valley, and rejoiceth in his strength: he goeth on to meet the armed men. He mocketh at fear, and is not affrighted; neither turneth he back from the sword. The quiver rattled against him, the glittering spear and the shield. He swalloweth the ground with fierceness and rage…

3. Andrew Scobell and Alex Stephenson (22 June 2022), “The United States and China: Who Changed the ‘Status Quo’ over Taiwan?”, usip.org