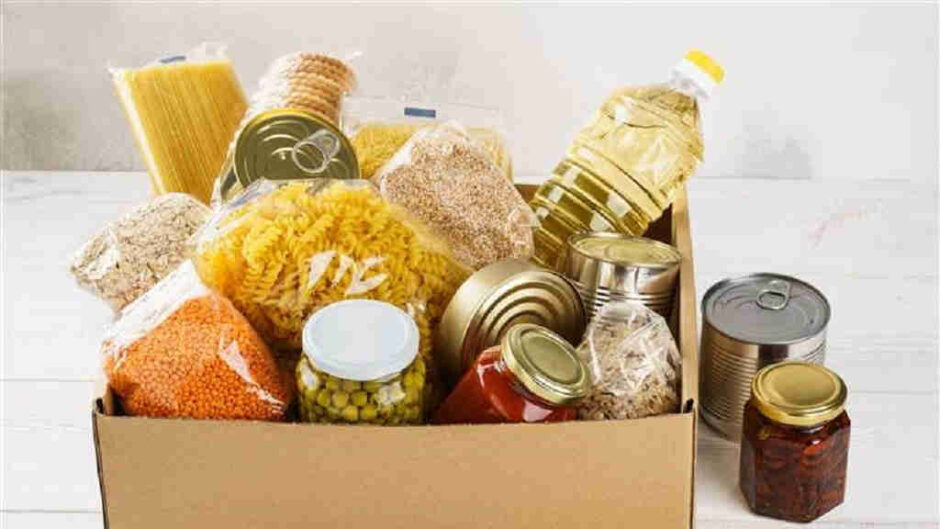 Many are struggling to make ends meet in these last days because of rising food prices and higher bills. Concerning the forthcoming third seal, which is about food price inflation and food shortages, the Bible prophesies that the oil and the wine are not to be hurt. Previously, I brought up the idea of prepping and stockpiling essential items now as a means to insure against further inflation and shortages in the future. The prophecy of a day’s wage for a portion of wheat means in due time everything including food will become extraordinarily expensive, or else food will be difficult to obtain, or else both. But of course, not everyone is in a position to stockpile, and some are already struggling today.

So, now, I would like to cover the idea of charity.

And above all these things put on charity, which is the bond of perfectness.

And above all things have fervent charity among yourselves: for charity shall cover the multitude of sins.

Then shall the King say unto them on his right hand, Come, ye blessed of my Father, inherit the kingdom prepared for you from the foundation of the world: For I was an hungred, and ye gave me meat: I was thirsty, and ye gave me drink: I was a stranger, and ye took me in: Naked, and ye clothed me…

In the KJV, 1 Corinthians 13 and also 1 Peter 4:8 translate the Greek word “agape” as “charity”. Some other Bible translations read “love” instead, because agape is a kind of love, said to be the highest form of love particular to Christianity, a kind of love that contrasts “philia”, which is brotherly love, and “eros”, which is romantic love. That may be so, and though charity and Christian love are akin, the message of 1 Corinthians 13 seems different and less clear with “love” instead of “charity”.

And now these three remain: faith, hope and love. But the greatest of these is love.

And now abideth faith, hope, charity, these three; but the greatest of these three is charity.

Paul, with the Holy Spirit, also explained that charity edifies.

… Knowledge puffeth up, but charity edifieth.

Comforting and edifying one another, in this time of tribulation and trouble, which includes the opening of the third seal, surely involves charity, because charity edifies.

Now, an important point about charity is the following: In ordinary times, Christians are to be charitable to all, friend and foe, per the teaching of the Son of man, in Matthew 5:42-47. The reason is that, in so doing, some individuals might be won over to Christ.

Give to him that asketh thee, and from him that would borrow of thee turn not away. Ye have heard that it hath been said, Thou shalt love thy neighbour, and hate thine enemy. But I say unto you, Love your enemies, bless them that curse you, do good to them that hate you… That ye may be the children of your Father which is in heaven: for he maketh the sun to rise on the evil and on the good, and sendeth rain on the just and on the unjust. For if ye love them which love you, what reward have ye? do not even the publicans the same? And if ye salute your brethren only, what do ye more than others? do not even the publicans so?

However, during these last days, an extraordinary moment in history, when God is deliberately not sending rain everywhere, and when God is making food expensive and scarce per the third seal, which is to hurt everyone except the oil and the wine, I think, Christians should not be charitable to everyone, because to do so would be to act contrary to the will of God at this time of wrath.

Plus, if one’s charity can be guaranteed to win over an unbeliever or even one of the enemy, then of course it is worthwhile; but if it cannot, then it is a waste, at this time of increasingly scarce resources, the consequence of inflation.

It is better to focus one’s finite time and resources on helping fellow Christians, some of whom will surely be in need.

We are bound to thank God always for you, brethren, as it is meet, because that your faith groweth exceedingly, and the charity of every one of you all toward each other aboundeth; So that we ourselves glory in you in the churches of God for your patience and faith in all your persecutions and tribulations that ye endure

But the end of things is at hand: be ye therefore sober, and watch unto prayer. And above all things have fervent charity among yourselves…

And even Jesus Christ, in Matthew 25:31-46, when he was on the earth as the Son of man, spoke of the importance of charity towards fellow Christians, especially in the last days before his Second Coming and the kingdom of God, when some Christians will be hungry, or thirsty, or without shelter, or without sufficient clothes, or sick, or in prison.

When the Son of man shall come in his glory, and all the holy angels with him, then shall he sit upon the throne of his glory: And before him shall be gathered all nations: and he shall separate them one from another, as a shepherd divideth his sheep from the goats… Then shall the King say unto them… Come, ye blessed of my Father, inherit the kingdom prepared for you from the foundation of the world: For I was hungered, and ye gave me meat: I was thirsty, and ye gave me drink: I was a stranger, and ye took me in: Naked, and ye clothed me: I was sick, and ye visited me: I was in prison, and ye came unto me. Then shall the righteous answer him, saying, Lord, when saw we thee an hungered, and fed thee? or thirsty, and gave thee drink? … And the King shall answer and say unto them, Verily I say unto you, Inasmuch as ye have done it unto one of the least of these my brethren, ye have done it unto me.

This is the idea of charity among the body of Christ.

The next thing to notice is that being charitable is not simply a matter of giving money away or donating goods. The gift or donation must actually reach the needy. This, I think, is the gist of 1 Corinthians 13:3.

And though I bestow all my goods to feed the poor… and have not charity, it profiteth me nothing.

In other words, about charity, beware of scams.

There are many charities around that collect money and then lose much of that money to misappropriation or incompetence. The Red Cross is one example (ref. 1).

There are others that are utterly fraudulent. These collect money supposedly for the purpose of charity but then use that money for something else. Mother Theresa’s Missionaries of Charity, which started in Calcutta India, is said to be like that.

The other day, I watched the documentary “Mother Theresa: For the Love of God?” (2022).

I was astonished to learn that her charity, which has collected millions of dollars or more from people all over the world, has spent on the poor a mere 7% of the total money (ref. 2, 3). That means some 93% has gone to the coffers of the Vatican, the same Vatican bank that has been mixed up with the Italian Mafia (ref. 4). The expression “a den of thieves” comes to mind.

And Jesus went into the temple of God, and cast out all them that sold and bought in the temple, and overthrew the tables of the moneychangers, and the seats of them that sold doves, And said unto them, It is written, My house shall be called the house of prayer; but ye have made it a den of thieves.

Mother Theresa also supported and accepted money from the likes of Charles Keating, who embezzled millions from American homeowners, and from the British media magnate Robert Maxwell, who siphoned millions from his employees’ pension funds. She also favoured Licio Gelli, a corrupt Italian financier, who was a Freemason. And she tried to intervene in a court case to protect the Jesuit Donald McGuire, who was found to be a notorious paedophile (ref. 5). Demon! Before then, McGuire had worked as a spiritual director in her missionary, which explains why her sisters would whip themselves with rope not unlike the Jesuit order and also the priests of Baal that cut themselves with knives (ref. 1 Kings 18:28).

In 2016, Pope Francis, himself a Jesuit, the world’s first Jesuit pope, which is apt in these last days, canonised Mother Theresa as a Catholic saint. During his 2015 trip to America, Pope Francis famously was not able to recite the LORD’s prayer (ref. 6).

Initially, Mother Theresa went to Calcutta India to teach and to preach the gospel of Jesus Christ. It was only later that she founded her own missionary and began to focus on hospice care and orphanages, instructing her sisters not to be political.

She never did succeed in transforming Calcutta and making it Christian, because India is a Hindu state, and according to Hinduism, society must be structured according to a system of castes. India’s culture is such that the lowest of the castes, the Dalits, are to be forever poor and forever discriminated against. In other words, the poor of India are poor because of the religious teachings of the gods that are behind Hinduism.

Another thing about Mother Theresa is that in 1962, she wrote: “If I ever become a saint, I will surely be one of darkness. I will continually be absent from heaven, to light the light of those in darkness on earth.”

Further yet, all Christians will go to heaven. Those who have died and those who are alive at the time of the seventh trumpet will both go to heaven (ref. 1 Thessalonians 4:15-17). Some will return to earth to serve Jesus Christ during the Millennial Reign; others will remain in heaven for that time. When the Millennial Reign is over, Jesus Christ and “his saints” (“saints”, ref. Jude 1:14) will return to heaven. No Christian will be continually absent from heaven, as Theresa of Calcutta put it.

Now, returning to the matter of charity. The point I was making is that to be charitable, you must make sure that the money that you give or the food that you donate actually goes to the needy.

So, one idea is to organise a foodbank-type charity out of a local congregation, as some churches are already doing. Besides feeding the body of Christ per Matthew 25:31-40, this might be an opportunity for a church to reach more people and spread the gospel.

Remember, 1 Thessalonians 5:11 says, in the last days, which includes the time of the third seal, a time when there will inflation and food shortages, Christians are to comfort and edify one another. What is more, 1 Corinthians 8:1 explains, that which edifies, especially during a time of need, is charity.

3. Nickolaus Hines (18 October 2021), “Inside The Little-Known Dark Side Of Mother Teresa”, allthatsinteresting.com

6. “Pope Francis says hell during Lord’s prayer and could not finish”, youtube.com/watch?v=UXEDBXUsaiE