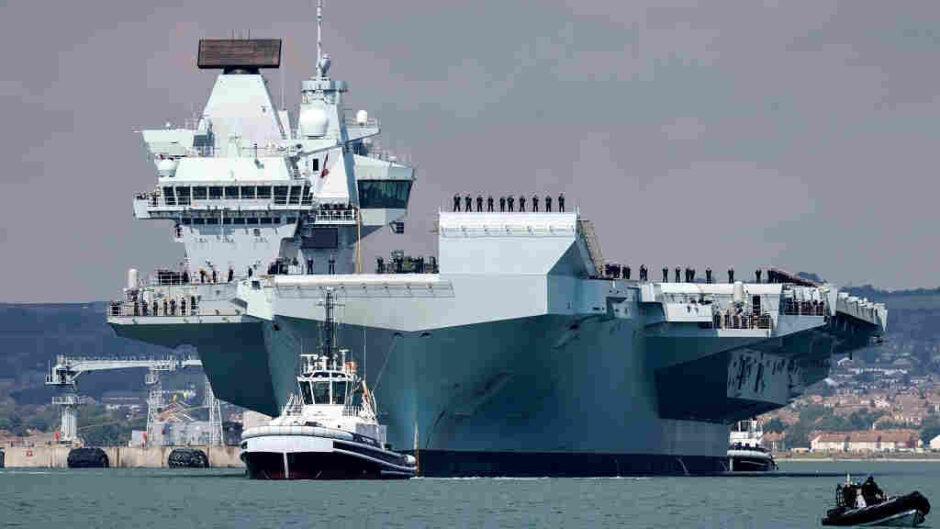 HMS Prince of Wales, one of the United Kingdom’s two £3 billion Elizabeth-class aircraft carriers, a warship that was recently designated the flagship of NATO, suffered a mechanical failure shortly after a colourful send-off, embarking for the USA (ref. 1). Consequently, her departure for exercises with the US Navy is now delayed, and she is limping back to port.

I think, now is a good time to remind all that, once and for a while, the British Royal Navy was the mightiest in the world.

At the height of its power, the British controlled an empire that spanned a quarter of the globe, and it was said that the sun never set on it.

The Vera Lynn song “Land of Hope and Glory” acknowledges that it was God, the LORD of hosts, that had made the British a mighty people:

“Wider still and wider
Shall thy bounds be set.
God who made thee mighty;
Make thee mightier yet.”

For a while, the British army carried a standard that was red, and British soldiers wore red coats (ref. Isaiah 63:2).

In 1805, at Trafalgar, the Royal Navy decisively defeated the combined fleets of Spain and Napoleon’s France, despite being outnumbered 33 to 27. The British lost no ships at all, while Spain and France lost 22. What is more, the British flagship “HMS Victory”, which was launched in 1765, exactly 40 years before Trafalgar – 40 being a biblically interesting number – was true to her commissioned name.

The only mistake of the Royal Navy was the appointment of one Horatio Nelson as commander of the British fleet aboard HMS Victory. Nelson was as much a Freemason as Napoleon. It so happened, Nelson was shot dead by a French musketeer during the battle, which denied him the opportunity to enjoy the glory of Trafalgar.

It is sort of like how Franklin Delano Roosevelt suddenly died on 12 April 1945, which was before the end of WW2. Roosevelt was not only a Freemason, but he delayed the USA’s entry into the war in spite of the many pleadings of Winston Churchill.

Even after Pearl Harbour, the USA did not formally declare war on Nazi Germany. It was Hitler who declared war on the USA.

In the grand scheme of things, Britain’s purpose during WW2 was to keep Jerusalem out of the hands of Nazi Germany. This was accomplished by the Second Battle of El Alamein 1942.

In WW1, Britain was tasked with liberating Jerusalem from the Ottoman Empire. This was accomplished by the battles of Beersheba 1917 and Megiddo 1918 (literally “Armageddon”).

The glory of 1917 was predicted by William Blake’s poem – a poem that in 1916 was made into an anthem of England.

“I will not cease from mental fight,
Nor shall my sword sleep in my hand,
Till we have built Jerusalem
In England’s green and pleasant Land.”

The military victories of 1917-18 and 1942 enabled the formation of the state of Israel in 1948. This is the prophecy of Isaiah 49. During WW1 and WW2, England was Christian and Gentile.

Listen, O isles, unto me; and hearken, ye people, from far; The LORD hath called me from the womb; from the bowels of my mother hath he made mention of my name… But Zion said, the LORD hath forsaken me, and my Lord hath forgotten me… Behold, I have graven thee upon the palms of my hands; thy walls are continually before me… Thus saith the Lord GOD, Behold, I will lift up mine hand to the Gentiles, and set up my standard to the people: and they shall bring thy sons in their arms, and thy daughters shall be carried upon their shoulders.

After WW2, the British diminished considerably. The loss of India marked the end. In effect, the sun had set on the British Empire.

All that glory and honour now gone. O how the mighty have fallen!

Rudyard Kipling, who was born in British India, wrote openly about Freemasonry in his 1888 novel “The Man Who Would Be King”.

Because British society turned away from God, British power and prestige in the world has diminished.

If ye forsake the LORD, and serve strange gods, then he will turn and do you hurt, and consume you, after that he hath done you good.

Today, there is talk that even Scotland and Northern Ireland might seek to separate from England. Nicola Sturgeon is pushing for another independence referendum (ref. 2). And Sinn Fein’s historic election victory a few months ago is said to be a step towards a united Ireland (ref. 3).

The rise and fall of the British Empire explains that British power came not from race, or genetics, or some notion of “white supremacy”.

Even the England of the Middle Ages was a hodgepodge of Romans, certain Britons, Anglo-Saxons (Germans), Vikings (Danes) and Normans (French).

In fact, England was conceived as a Christian nation by Alfred the Great. He formed a new culture and society based on the laws of Moses. Such was the beginning of “the Common Law”, an expression that has lost its meaning.

Bernard Cornwell ironically titled his tales about Alfred the Great “The Last Kingdom”. Alfred’s kingdom of Wessex was the last one standing at the time of the Viking invasion of the British isles. Alfred and his kin went from the brink of defeat to total victory because he was committed to the idea of a Christian England.

Of course, later, some of the Anglo-Saxons of England became corrupted by the many gods of the Vikings. Think demons. So, England had to be reinforced by the Normans. At the time, the Franks were a very Christian people.

After Alfred, England went on to become the British Empire, and fulfil the prophecy of Isaiah 49, concerning the establishment of the modern state of Israel. So, truly, destiny is all.

In these last days, England will be on the wrong side, and consequently England, specifically the Royal Navy, will be humbled (ref. Isaiah 2:16). But after the war, England will return to the fold (ref. Psalms 72:10).

The kingdom of God is literally the final and ultimate kingdom because it will be an everlasting kingdom, essentially a “world without end” (ref. Isaiah 45:17, Ephesians 3:21).

I saw in the night visions, and behold, one like the Son of man came with the clouds of heaven, and came to the Ancient of days, and they brought him near before him. And there was given him dominion, and glory, and a kingdom, that all people, nations, and languages, should serve him: his dominion is an everlasting dominion, which shall not pass away, and his kingdom that which shall not be destroyed.

God’s kingdom, which begins on the day of the LORD, or the Second Coming of Jesus Christ, will be everlasting because Jesus Christ is Almighty.

I am Alpha and Omega, the beginning and the ending, saith the Lord, which is, and which was, and which is to come, the Almighty.

4. “The Last Kingdom. One King. One England.”, youtube.com/watch?v=4u4_uJhsiiI