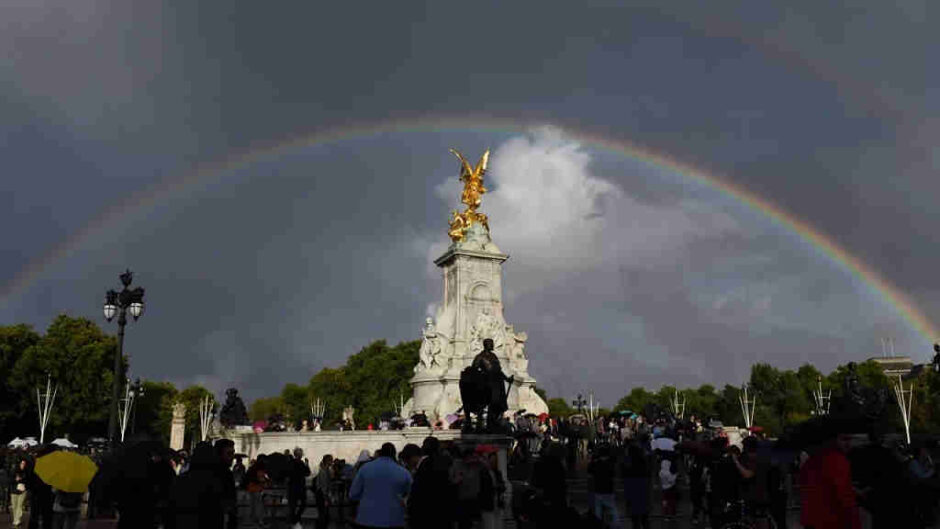 Today, Queen Elizabeth II, the monarch of the United Kingdom, Great Britain and Northern Ireland, and until 2018 the head of the Commonwealth, passed away (ref. 1). She was 96 years old.

Elizabeth II was the longest reigning British monarch in history.

However, during her reign, firstly, the British Empire came to an end; secondly, the Anglican church went from having the King James Version (1611 & 1769) of the Bible as its authorised Bible to being an institution that focuses merely on ceremony, costume and singing hymns; and thirdly, Britain, despite once reigning over North America, became essentially a vassal of the United States of America.

About the latter, keep in mind that in 1956, Britain together with France, and also Israel, took military action against Egypt over the Suez Canal, despite the position of the USA concerning the British Empire. Then, between 1963 and 1966, Britain fought a territorial conflict against Indonesia, to protect Malaysia and so Singapore, even though Indonesia’s President Sukarno was the CIA’s man, which was made clear by the mass slaughter of Indonesian Chinese during 1965-66 for the sake of the Cold War. Even as late as the Vietnam war that lasted until 1975, Britain refused to send troops to aid the USA in its fight against the communists of North Vietnam.

On top of all that, in the 1950s, Britain secretly sold heavy water to Israel, to help Israel develop its nuclear weapons programme. This angered the US president at the time JFK, when he found out about it. Prophetically, Israel is to be a nuclear state at the time of the end, and so this thing that Britain did for Israel in the 1950s was the will of God.

So, for a long while, Britain was a normal country willing and able to pursue its own foreign policy. But then came Margaret Thatcher who surrendered Britain’s nuclear deterrent in exchange for American Trident SLBMs. Britain has never been the same since.

So, the reign of Elizabeth II has not been a glorious one, unlike, for instance, the golden age of her namesake, Elizabeth I, who was famous for defeating the Spanish Armada, and setting England on a course toward exploration and expansion.

The Crown now passes on to the Prince of Wales, Charles, who is 73 years old.

After Charles, the throne will go to the Duke of Cambridge, William. And then after him, Prince George, the firstborn son of William and Katherine of Cambridge.

So now, and for the next two heirs, the Crown of England will be held by a king rather than by a queen.

When Mary I of England died, and her half-sister Elizabeth I assumed the throne, it was declared, “The queen is dead, long live the queen!”, as is customary when there is a succession.

Mary was Catholic, and Elizabeth was Protestant, but the saying impressed upon all that the kingdom of England would carry on as normal.

This time, with the death of Elizabeth II, the declaration is a bit different, “The queen is dead, long live the king!” Not since the passing of Queen Victoria and the ascendancy to the throne of her son Edward has the phrase been like this.

It is remarkable that England is to now have a king, because it is Bible prophecy that a king of England will bring gifts to the kingdom of God during the Millennial Reign of Jesus Christ.

The kings of Tarshish [England] and of the isles shall bring presents: the kings of Sheba and Seba shall offer gifts.

It is also interesting that during the two world wars, the British Crown was held by kings, George V and George VI respectively. Now that the Crown is once more in the hands of a king, perhaps the next world war is about to start.

It is also proper that a kingdom should be ruled by a king rather than by a queen. After all, it is not a queendom.

As part of today’s woke and feminazi agenda, apparently there is a movie coming called “The Woman King” (2022).

The Bible teaches that the man is to be the head of the household (ref. 1 Corinthians 11:3), and at least on matters spiritual, the woman is not to usurp authority over the man (ref. 1 Timothy 2:12). Concerning the latter, the monarch of England is also the head of the Anglican church, holding the title “Defender of the Faith”. So, it was always unseemly that at the top of the Anglican church was a queen.

But I suffer not a woman to teach, nor to usurp authority over the man, but to be in silence. For Adam was first formed, then Eve. And Adam was not deceived, but the woman being deceived was in the transgression. Notwithstsanding she shall be saved in childbearing, if they continue in faith and charity and holiness with sobriety.

Speaking of things unseemly, the Prince of Wales and other male royals ought to stop wearing the Scottish kilt. That male skirt started around the time of the Enlightenment, the 18th century. So, it was always a Satanic thing. At first, the British government outlawed the kilt, The Dress Act 1746. It was only later that the government relented.

For that matter, in Paris France, up until 2013, women were prohibited from wearing trousers.

However, in these last days, across the world, because of the USA, which legalised same-sex marriage in 2015, and because of the unrelenting propaganda of the genies of Hollywood, cross-dressing and gender-bending has taken on a whole new level.

In one recent case in Ireland, the controversy of pronouns has gotten a Christian in trouble (ref. 2).

Maybe, Elizabeth II personally tried to be a conservative, to remain as England was when she came of age in the 1940s. But British society moved away.

Jesus Christ the same yesterday, and to day, and for ever.

So, the reign of Elizabeth II has not been glorious. Perhaps, Elizabeth II was simply unlucky to have been on the throne during this time.

She did attend church. Alas, it was the spiritually void Anglican church of which she was the head, a church that has been systematically weakened over the years by Jesuit intrigue.

During one Christmas address, I remember she remarked, “The light shines in the darkness and the darkness has not overcome it”. It should actually be “and the darkness comprehended it not”, which is quite different in meaning.

And the light shineth in darkness; and the darkness comprehended it not.

To her credit, she did somewhat dislike Princess Diana, who had sought to marry two different Muslims, I suppose, to transform the Crown.

She also sidelined Prince Andrew after he was caught up in a scandal with the American tycoon and criminal Jeffrey Epstein.

But above all, it is telling that Meghan Markle, the American divorcee who married Prince Harry, despises the palace of Elizabeth II. Meghan has been trying at every opportunity to taint the reputation of the Royal Family. The most recent news has something to do with the “N-word” (ref. 3).

Moreover, with Megxit, there is history repeating itself. Wallis Simpson, who married Edward VIII, was also an American divorcee. Edward VIII abdicated from the throne, and was said to be a Nazi sympathizer. Harry has been photographed wearing a Nazi costume at a party, and he has admitted to smoking cannabis. Meghan also has been corrupted by drugs. She once boasted of serving marijuana joints to guests at her first wedding.

The reason why the enemy is trying to weaken the British public’s opinion of the Crown of England is that, in due time, it will most likely be the Crown’s power of Royal Prerogative that will recover England and bring it back into the fold. This is something I have raised before. Many forget that the United Kingdom is not actually a parliamentary democracy, but rather it is a kingdom. The prime minister is always the Crown’s prime minister, and all British soldiers swear allegiance to the Crown as opposed to the Parliament. There is even an infantry regiment, the Grenadier Guards, whose purpose besides fighting as a light role infantry is to defend the person of the Crown. All this is not for nothing.

The death of Elizabeth II could well mark the end of an era. Either Charles III or William V could be an altogether different monarch from Elizabeth II, one more willing to assert royal authority when it becomes necessary.

About one hour before the death of Elizabeth II was announced by Buckingham Palace, a double rainbow appeared over the Palace in London (ref. 4). The rainbow could not only be seen over the Palace but also over major landmarks across London, including Elizabeth Tower in Westminster and the Queen Victoria Memorial with the golden angel.

Nowadays, people associate the colours of a rainbow with the LGBTQ movement.

But actually, a rainbow that appears after rain is a sign from God, per Genesis 9:13 – a promise that was made after the flood of Noah not to cut off everyone.

I do set my bow in the cloud, and it shall be for a token of a covenant between me and the earth.

Furthermore, according to Revelation, a rainbow also appears in heaven around the throne of God (ref. Revelation 4:3).

And immediately I was in the spirit: and, behold, a throne was set in heaven, and one sat on the throne. And he that sat was to look upon like a jasper and a sardine stone: and there was a rainbow round about the throne, in sight like unto an emerald.

So, I think, the passing of Elizabeth II is a significant event in these last days.

3. “She’s made this up: Meghan’s extraordinary claim about Royal Family”, youtube.com/watch?v=LZvGzx3vkS4