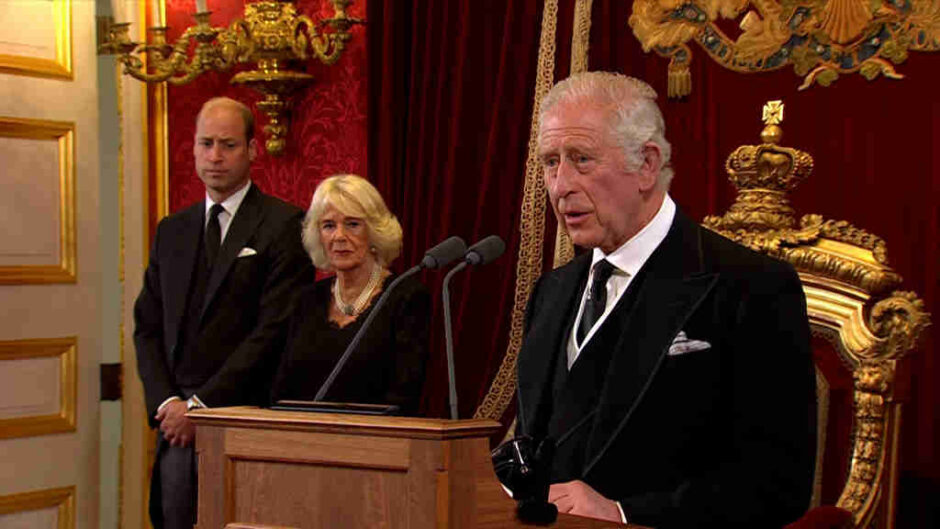 “I pray for the guidance and help of Almighty God.” This was the declaration of Charles III, at a ceremony today inside St James’s Palace in London, where he was formally proclaimed king in front of the Privy Council (ref. 1).

In a historic first, the ceremony of the Accession Council was televised.

During the ceremony, Charles III also took an oath to maintain and preserve the Protestant faith throughout the United Kingdom, as was agreed in a settlement in Scotland centuries ago (ref. 2).

When the Accession Council was over, the Garter King at Arms read the formal proclamation to those outside the Palace, including a troop in redcoats (ref. 3).

“We do acknowledge all faith and obedience with humble affection, beseeching God, by whom kings and queens do reign, to bless His Majesty with long and happy years to reign over us… God Save the King.”

Notice the traditional and very Christian words of the proclamation, which includes a reference to Romans 13:1.

Notice also, “God save the king”, which is the British national anthem.

… And all the people shouted, and said, God save the king.

Now, I should point out that St James’s Palace is a Tudor castle, commissioned in 1536 by Henry VIII. Inside the Palace can be seen the initials “H.A.”, which stands for Henry VIII and Anne Boleyn, a marriage that was instrumental in transforming the realm from Catholic to Protestant.

St James’s Palace is also the place where Charles II was born in 1630. Charles II, as in the Restoration of the monarchy after the English Civil War and the era of Oliver Cromwell. Though Cromwell, who was for Protestantism, was correct about Christianity, and though Charles II leaned towards Catholicism, the Restoration of the Crown ensured that England would essentially be a kingdom and not a democracy. In other words, for the United Kingdom, the Crown would preserve its supremacy over the Parliament.

I am fairly sure that, at the appointed time, England will be recovered from the top down, through the reserve power of the Royal Prerogative.

Mystery Babylon is the superpower that now reigns over the kings of the earth (ref. Revelation 17:18). However, at some time during the days of the false prophet, the true evil of Mystery Babylon will be clearly seen by all across the world (ref. Isaiah 47:1-4).

Come down, and sit in the dust, O virgin daughter of Babylon, sit on the ground: there is no throne, O daughter of the Chaldeans: for thou shalt no more be called tender and delicate. Take the millstones, and grind meal: uncover thy locks, make bare the leg, uncover the thigh, pass over the rivers. Thy nakedness shall be uncovered, yea, thy shame shall be seen: I will take vengeance, and I will not meet thee as a man. As for our redeemer, the LORD of hosts is his name, the Holy One of Israel.

When Babylon becomes openly evil, it will be very difficult for other nations to follow her. For sure, some politicians in places such as England and Australia will try.

But in the case of England, I think, the Crown will intervene, for it is Bible prophecy that at some point, England will return to Jesus Christ.

Your mother shall be sore confounded; she that bare you shall be ashamed: behold, the hindermost of the nations shall be a wilderness, a dry land, and a desert. Because of the wrath of the LORD it shall not be inhabited, but it shall be wholly desolate…

If the USA under the forthcoming false prophet is the hindermost of the nations – the prophesied eighth kingdom of Satan (ref. Revelation 17:11), also known as the beast of the earth – then the mother of that nation must be England, because of 1776.

Granted, it might be that the mother of the hindermost of the nations is the USA before the time of the false prophet.

But if Babylon’s mother is England, then Jeremiah 50:12 means in due time England will reject Satan and be ashamed of the USA.

Now, let me say that the Westminster system of Parliament, as it was conceived and shaped through the Magna Carta and the English Civil War and also the Restoration, is of God.

The reason is that Israel right now is governed by this system. The Knesset is a direct result of British rule over Jerusalem from 1917 until 1948.

Furthermore, it is Bible prophecy that Judah is to be governed by a legislature at the time of the end (ref. Genesis 49:10).

The sceptre shall not depart from Judah, nor a lawgiver from between his feet, until Shiloh come; and unto him shall the gathering of the people be.

Notice in Genesis 49:10, there are two clauses. This is a cryptic statement in the Old Testament of the two comings of Jesus Christ. Remember, Jews generally are not supposed to know about the first coming (ref. Romans 11:25).

… blindness in part is happened to Israel until the fulness of the Gentiles be come in.

When Jesus Christ first came to Judah, the sceptre did depart, as the first clause states. Herod at the time of the Son of man was in fact the last king of Judah as Genesis had foretold. Herod was a puppet king of the Romans, but a king nonetheless.

The next time the Messiah comes to Judah, the day of the LORD, Judah will transform from a democracy into a kingdom, as the second clause states. At that time, the lawgivers of Judah shall depart from between his feet, as Genesis foretells.

Thus begins “the kingdom of God”.

For unto us a child is born, unto us a son is given: and the government shall be upon his shoulder… Of the increase of his government and peace [“Shiloh”] there shall be no end, upon the throne of David, and upon his kingdom…

3. Lydia Starbuck (10 September 2022), “The words that declared a king – the full proclamation of Charles III”, royalcentral.co.uk