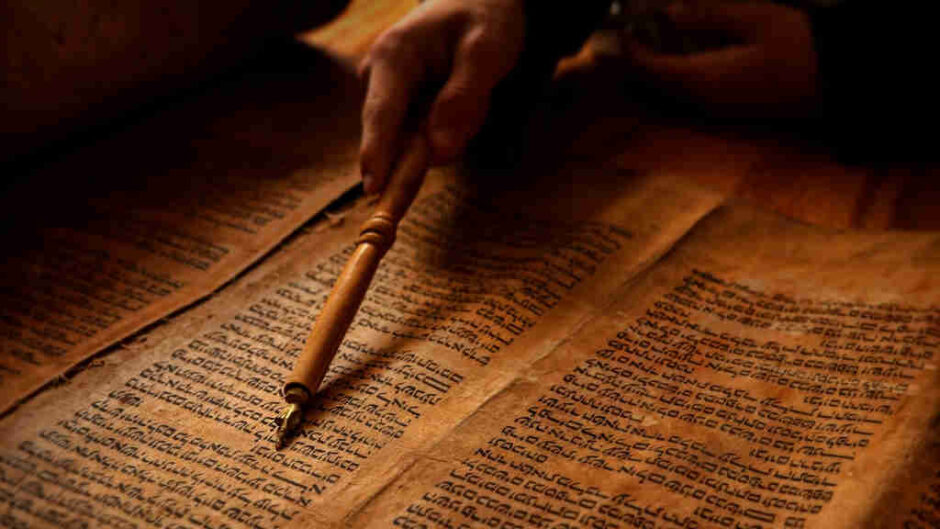 The 1611 King James Version of the Bible, and the 1769 re-spelling of the same, is undoubtedly the most accurate English translation of the Bible ever. Nevertheless, there is information in the original Hebrew, Aramaic and Greek that has been lost in translation simply because the grammar of the English language is different from the grammars of the languages of Hebrew, Aramaic and Greek. For this reason, there are insights to be found by reading the Masoretic Text and the Textus Receptus, from which the KJV 1611 was translated.

The other day I noticed that in one verse of the New Testament, the word “saints”, as in “holy ones”, in Greek is αγιαις “hagiais”, feminine, and in another it is αγιων “hagion”, masculine. This difference in gender is deliberate and meaningful. So, when the English reads simply “saints”, some information has been lost in translation.

Besides the gender of nouns, there is also the way verbs are conjugated. Verbs are conjugated in all four languages, but not the same way. Let me give you an example. In English, for “create”, the singular past tense is the same as the plural past tense: “he created”; “they created”. But in Hebrew, these two are different. In Hebrew, “he created” is ברא “bara”, and “they created” is בראו “baru”. These sorts of differences again mean crucial information can be lost in translation.

I bring up the verb “to create”, because some years ago, when I started to learn Hebrew I noticed that in the very first sentence of Genesis, something interesting is being said about God by the grammar of the sentence.

This unusual subject-verb agreement makes the point that God is one and three at the same time. God is a he, singular masculine, and at the same time plural masculine, if I can put it that way. This is the idea of “the Trinity” (ref. 1 John 5:7), a concept known to Christians but not to Jews.

Regrettably, I stopped studying Hebrew after discovering that the script of the written alphabet of Hebrew as it is today is not actually proper Hebrew but something called “Ktav Ashuri” or the “Assyrian script”, a form of writing that the Jews picked up in Nebuchadnezzar’s Babylon when they were in captivity there. This is why the prophets Daniel and Ezra preferred Aramaic to Hebrew. Nobody knows what proper Hebrew looks like anymore – not even historians and archeologists. Perhaps it is this that explains the prophecy of Revelation 19:12, that Jesus Christ will have a name written that no man knows or can read except he himself.

… and he had a name written, that no man knew, but he himself.

During the Millennial Reign, the true holy language of God will be explained to everyone.

For then will I turn to the people a pure language, that they may all call upon the name of the LORD, to serve him with one consent.

I am also sure that the entire Bible will thereafter be read in this holy language.

Anyway, having stopped with Hebrew as it is now, and not having the resources to start again, I am now not in a position to figure out if there are any further undiscovered insights in the original Masoretic Text – things that are not in the KJV, information that has been lost in translation.

The Textus Receptus is also beyond my reach, except for what I can find in Strong’s concordance.

Not to mention Aramaic.

So I ask anyone who is able to examine the verses of the Bible that pertain to prophecy in these last days, in the original Hebrew, Aramaic and Greek, to help do so, and to share their findings online.

The commentary by Anthony Buzzard, of Focus on the Kingdom, on the masculine conjugation of the Greek word εστηκοτα “hestekota” in Mark 13:14 – something I came across while browsing Youtube recently (ref. 1) – is the sort of thing I mean.

I myself take the view that “the abomination of desolation” in Daniel 9:27 and Matthew 24:15 and Mark 13:14 will be a man rather than a thing. I came to this conclusion after focusing on what might be meant by “abomination” and “desolation”.

Even so, it is good to realise that the Greek grammar of Mark 13:14 reveals information that the abomination of desolation will be a man, a he, as opposed to a thing such as an idolatrous statue.

I don’t agree with everything that others say, but I always watch and listen in case there is something new.

The original Hebrew, Aramaic and Greek of the Masoretic Text and the Textus Receptus may well contain yet to be discovered insights. After all, it might be that every word of God is precise and purposeful.

And Jesus answered him, saying, It is written, That man shall not live by bread alone, but by every word of God.

It may even be that a particular jot or tittle of the Bible has some important meaning.

For verily I say unto you, Till heaven and earth pass, one jot or one tittle shall in no wise pass from the law, till all be fulfilled.