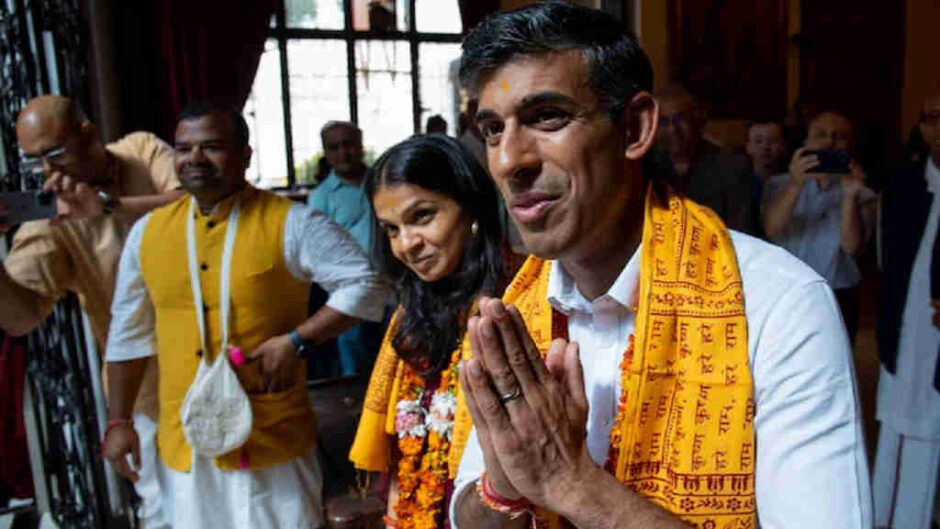 His predecessor, Liz Truss, resigned after some 49 days in office, the shortest tenure of a prime minister in the history of the United Kingdom. Her demise was due to her spectacularly bad idea of a tax cut for the wealthy at a time of widespread financial struggle because of inflation and an external shock regarding energy. Not only that, the tax cut was to be funded by government borrowing. The markets, which make a living on getting things right, made it clear just how wrong her idea was.

Truss read PPE at Oxford, as did Sunak, so both have studied economics, the E in PPE.

Maybe she knew that a tax cut for the wealthy funded by borrowing was the wrong idea politically at this time but she tried it anyway, because the elites have gotten away with this sort of thing for so long: enrich the few at the expense of the many. (Read my Les Miserables article.)

Anyway, the rise of Rishi Sunak, now of all times, is possibly prophetic.

Sunak was born in Southhampton, United Kingdom, to parents of Indian origin.

He is not only the UK’s first non Anglo-Saxon prime minister, but also the first Hindu prime minister (ref. 2). Sunak worships the gods of India’s Hinduism and he was named the leader of the UK on the day of Diwali, the Hindu festival of lights.

Generally, Hinduism celebrates death, because Hindus believe after death comes reincarnation. It has never occurred to Hindus that reincarnation is simply a lie. The idea of reincarnation also perpetuates the Hindu caste system, which means some Indians, such as Dalits, are to be forever poor and forever discriminated against. This means, unnecessary poverty and suffering. Therefore, Hinduism is evil.

After graduating from Oxford, Sunak worked at the investment bank Goldman Sachs (ref. 3), and then at some hedge funds. His career in finance spanned London, California, and India. He did this before entering British politics as an MP for Richmond.

Sunak’s time as an investment banker has made him rich.

But Sunak also married into Indian money. His wife Akshata Murty is the millionaire heiress of India’s Infosys (ref. 4). She is an Indian citizen, and for tax reasons a British non-domicile, a non-dom. It is fair to say, Sunak’s other half is loyal to India.

This tells me that British foreign policy will now go a certain way.

Today, India is in America’s Quad, a geopolitical group set up to counterweight and fight China. India also has border disputes with China, over Aksai Chin, what India calls Ladakh, and over a part of Tibet, what India calls Arunachal Pradesh. There is no doubt that China and India will be at it, once WW3 starts. America, the spiritual harlot Babylon, is already training with India, and preparing India to take on China.

A war between China and India is inevitable because it is Bible prophecy that all the gods of the earth are to be made lean. Hinduism and Buddhism are no exceptions.

When the dust settles, I think, the idea of India as a cohesive state will be over. Today, in India, which is led politically by the Hindu nationalist BJP, there are many reds, and even outright Marxists. To the government of India, some of these reds are insurgents. Analysts in China have previously spoken of breaking up India into smaller pieces.

Of course, with Sunak at Number 10, Britain will send her ships to fight alongside India and the Quad, against China. Prophetically, this should see all the ships of Tarshish humbled.

But then, when Mystery Babylon under the False Prophet begins to submit to and align with the Assyrian and his empire, which means Islam and the Sharia law of ISIS, Britain with Sunak at the helm will baulk.

This might well explain the prophecy of Babylon’s mother – think 1776 – becoming confounded and ashamed.

Your mother shall be sore confounded; she that bare you shall be ashamed: behold, the hindermost of the nations shall be a wilderness, a dry land, and a desert.

Otherwise, to keep Britain from turning into an Islamic State, there is the Crown’s power of Royal Prerogative.

Perhaps one of these two is plan A and the other is plan B.

Speaking of plan Bs, I think, India was once a plan B for the prophesied two hundred million strong army of Revelation. The populations of China and India were set in motion a long time ago, something that only God who declares the end from the beginning could ever do.

And the LORD shall utter his voice before his army: for his camp is very great: for he is strong that executeth his word: for the day of the LORD is great and very terrible; and who can abide it?

Remember, at one point, Satan, also known as the Dragon, did take control of China. This was before the common folk of China stood up, in the name of communism.

Notice also that the Sikhs of India have hair long, as did men of ancient China.

And they had hair as the hair of women, and their teeth were as the teeth of lions.

India, as plan B, also explains why Russia was once, and to some extent still is, India’s main supplier of military arms.

Now, I am fairly sure that China under Xi Jinping 习近平 will do what it must when the time comes.

The name Xi 习 is the same in meaning as mine Lian 练, “practise”. But 习 can also mean “flapping wings”. What is more, Xi in traditional Chinese is 習. That character comprises Yu 羽 meaning “feather” or “wings”, and Bai 白 meaning “white”. The allusion here is to a bird, perhaps even a bird of prey for the LORD.

Long ago, I had thought Xi Jinping is the one who is to be the ravenous bird from the east.

Remember the former things of old: for I am God, and there is none else; I am God, and there is none like me, Declaring the end from the beginning, and from ancient times the things that are not yet done, saying, My counsel shall stand, and I will do all my pleasure: Calling a ravenous bird from the east [“mizrach”, rising of the sun], the man that executeth my counsel from a far country: yea, I have spoken it, I will also bring it to pass; I have purposed it, I will also do it.

Like Cyrus before him, Xi was surnamed by God even though Xi, being an atheist, does not know God.

More recently, having figured out the meaning of the “saints”, I read the ravenous bird to mean a saint, a certain born again Christian during the Millennial Reign who is more ravenous than the rest.

Still, my original instinct might be correct. For, in terms of sheer numbers, no one will out do China, at the time of the four angels of the river Euphrates.

And the four angels were loosed, which were prepared for an hour, and a day, and a month, and a year, for to slay the third part of men.

According to some, the name Sunak in Sanskrit means “dog”; and according to others, it means “listener”.

The English word “dog” happens to be the backwards of “god”. Will Rishi Sunak challenge Almighty God, the LORD, or will this prime minister at some point, for the sake of the British people, listen to the truth?