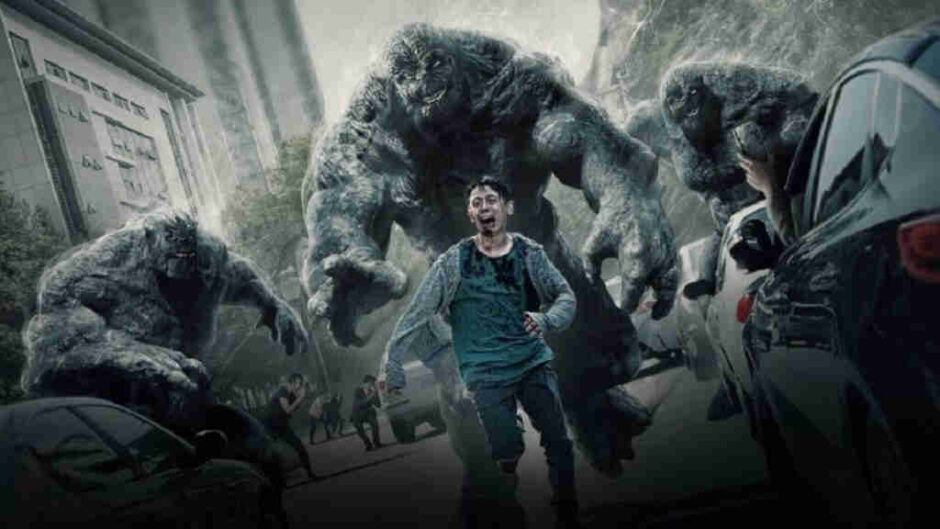 Hell is a “prison” (ref. Revelation 20:7, 1 Peter 3:19) for evil spirits and certain souls. Jesus Christ holds “the keys of hell and of death” (ref. Revelation 1:18). Hell is a “bottomless pit” (ref. Revelation 11:7, 17:8), somewhere deep in the planet earth, towards the core which is hot, covered in molten iron. Being down below, it is a place that contrasts heaven, up above.

In the original Hebrew, hell is שאול “sheol”.

I made the nations to shake at the sound of his [Pharaoh] fall, when I cast him down to hell [sheol] with them that descend into the pit: and all the trees of Eden, the choice and best of Lebanon, all that drink water, shall be comforted in the nether parts of the earth.

In the original Greek, hell is αδης “hades”, and also ταρταρωσας, a derivative of “tartarus”, which according to Strong’s is “the deepest abyss of hades”.

And I say also unto thee, That thou art Peter, and upon this rock I will build my church; and the gates of hell [hades] shall not prevail against it.

For if God spared not the angels that sinned, but cast them down to hell [tartarus], and delivered them into chains of darkness, to be reserved unto judgment;

Sometimes, the KJV Bible also uses the English word “hell” to describe what must be “the lake of fire”. In these instances, the original Greek is γεενναν, a derivative of “geenna”.

And fear not them which kill the body, but are not able to kill the soul: but rather fear him which is able to destroy both soul and body in hell [geenna].

The prison of hell is different from the lake of fire because in Revelation 20, it is explained that, at the time of the great white throne, the sea and the ground will deliver up the dead, and so too will hell. And then, the dead will be judged according to their works by Jesus Christ. And then, “death and hell” will be cast into the lake of fire.

All this begs the question, why are some of the lost put in hell, whereas others remain asleep in the ground or in the sea?

My answer to that is this: hell is an additional punishment, reserved for certain individuals among the lost.

Having explained what is hell, the next part is, who precisely are bound for hell?

Though it is not expressly stated in the Bible, my instinct is that Satanists, all who worship and serve the Devil, are the ones who are hellbound.

Hell was originally conceived as a prison for angels that sin (ref. 2 Peter 2:4).

When Jesus Christ returns, the Devil, also known as Satan, will be arrested and cast into hell (ref. Revelation 20:1-3). This will be done to at least shut him up so that he cannot deceive the nations for a thousand years.

And I saw an angel come down from heaven, having the key of the bottomless pit and a great chain in his hand. And he laid hold on the dragon, that old serpent, which is the Devil, and Satan, and bound him a thousand years, And cast him into the bottomless pit, and shut him up, and set a seal upon him, that he should deceive the nations no more, till the thousand years should be fulfilled: and after that he must be loosed a little season.

Because of the prophecy of Gog and Magog, when Satan is to be defeated by God the Father, once the thousand years are over Satan will be released from hell. Satan is therefore “the beast that ascendeth out of the bottomless pit” in Revelation 11:7 and 17:8, that will eventually go into perdition.

The beast that thou sawest was, and is not; and shall ascend out of the bottomless pit, and go into perdition: and they that dwell on the earth shall wonder, whose names were not written in the book of life from the foundation of the world, when they behold the beast that was, and is not, and yet is.

Isaiah 14 further explains that human souls will be in hell when Satan is brought there, and at that time they will say unto him, “Art thou also become weak as we? art thou become like unto us?”

Hell from beneath is moved for thee to meet thee at thy coming: it stirreth up the dead for thee, even all the chief ones of the earth; it hath raised up from their thrones all the kings of the nations. All they shall speak and say unto thee, Art thou also become weak as we? art thou become like unto us?

This tells me that one of the purposes of hell is to humble the proud. Remember, Satan, also known as leviathan, is “king over the children of pride” (ref. Job 41:34).

Satan, his angels, and his human servants must be cut down and brought low, humbled, because even though they are merely creatures of God, they have considered themselves above God, greater than the Almighty.

How art thou fallen from heaven, O Lucifer, son of the morning! how art thou cut down to the ground, which didst weaken the nations! For thou hast said in thine heart, I will ascend into heaven, I will exalt my throne above the stars of God: I will sit also upon the mount of the congregation, in the sides of the north: I will ascend above the heights of the clouds; I will be like the most High. Yet thou shalt be brought down to hell, to the sides of the pit.

Therefore, it is only right that they are destined to realise their error.

Another account in the Bible of a human soul in hell can be found in Luke 16, the story of the rich man and the beggar Lazarus.

And in hell [hades] he lift up his eyes, being in torments, and seeth Abraham afar off, and Lazarus in his bosom. And he cried and said, Father Abraham, have mercy on me, and send Lazarus, that he may dip the tip of his finger in water, and cool my tongue; for I am tormented in this flame.

First of all, the rich man is rich and uncharitable (ref. Luke 16:19-20). Think ill-gotten gains, and greed. Second, he and his brethren have refused to listen to Moses and the prophets of God (ref. Luke 16:31), meaning the Holy Spirit. And last but not least, the tongue of this man is being tormented in hell (ref. Luke 16:24). This suggests that while he lived, he might have said things in service of Satan to acquire the riches that he did. In other words, he served “mammon” rather than God (ref. Luke 16:13).

And the tongue is a fire, a world of iniquity: so is the tongue among our members, that it defileth the whole body, and setteth on fire the course of nature; and it is set on fire of hell [geenna].

Maybe, the rich man’s work for Satan – his challenging of the word of God, even his blasphemy of the Holy Ghost – caused souls to be lost to Satan, and for this reason, the man was damned to hell.

In contrast to my theory about who is bound for hell, the Netflix series Hellbound (2021-) suggests that hell is for everyone who has sinned against God (ref. 1).

While it is true that “he that committeth sin is of the Devil” (ref. 1 John 3:8), because all who want eternal life, rather than eternal death in the lake of fire, should aspire to be righteous and keep the commandments of God (ref. Revelation 14:12, Matthew 19:17, John 14:15, 1 John 5:2, etc) as well as faith in Jesus, Jesus also said that all sins are forgivable, except for blasphemy against the Holy Ghost (ref. Matthew 12:31).

For all have sinned, and come short of the glory of God;

So, actually, continual unrepentance of sin is the problem.

The Lord… is longsuffering to us-ward, not willing that any should perish, but that all should come to repentance.

But in Hellbound (2021-), death comes for sinners while they still live, giving those individuals no opportunity to repent.

Hellbound (2021-) further says that occasionally someone who has not sinned at all – the baby – might also be cast into hell. This is not unlike the nonsense that is in Hollywood’s Left Behind (2014) and HBO’s Leftovers (2014-2017), which suggest that babies might be raptured, an idea propagated by demons to provoke anger against God.

To be sure, there is truth to Hellbound (2021-), which I will explain in a moment, but it is all spun and presented in a way so as to incite hatred of God.

Challenging God is precisely the wrong thing to do in these last days.

It is clear in the Bible that during the tribulation all who side with the Antichrist, the Assyrian, will go to hell. Remember, the fourth horseman of the apocalypse will have the name of Death, and “Hell” is coming with him (ref. Revelation 6:8).

And I looked, and behold a pale horse: and his name that sat on him was Death, and Hell [hades] followed with him. And power was given unto them over the fourth part of the earth, to kill with sword, and with hunger, and with death, and with the beasts of the earth.

Even those who obey the false prophet of Babylon, and worship the beast, are bound to at least suffer the lake of fire, if not also the prison of hell.

The same shall drink the wine of the wrath of God, which is poured out without mixture into the cup of his indignation; and he shall be tormented with fire and brimstone in the presence of the holy angels, and in the presence of the Lamb: And the smoke of their torment ascendeth up for ever and ever: and they have no rest day nor night, who worship the beast and his image, and whosoever receiveth the mark of his name.

Certainly, the leaders and influencers of the earth that have taken the side of Satan and have caused souls to be lost will go to hell, before they are cast into the lake of fire.

And it shall come to pass in that day, that the LORD shall punish the host of the high ones that are on high, and the kings of the earth upon the earth. And they shall be gathered together, as prisoners are gathered in the pit, and shall be shut up in the prison, and after many days shall they be visited.

Fear, and the pit, and the snare, are upon thee, O inhabitant of the earth.

On the day of the LORD, Jesus Christ will send his angels to remove from the promised land all that remain there that are against him.

The Son of man shall send forth his angels, and they shall gather out of his kingdom all things that offend, and them which do iniquity; And shall cast them into a furnace of fire: there shall be wailing and gnashing of teeth.

And then, at the time of Christ’s saints with wings as eagles, across the world there will be more hunting (ref. 2).

At that time, the expression “Give them hell” will come to have new meaning.

To not be hellbound, you must choose the correct side now, before it is too late.

The fear of the LORD is the beginning of wisdom: and the knowledge of the holy is understanding.