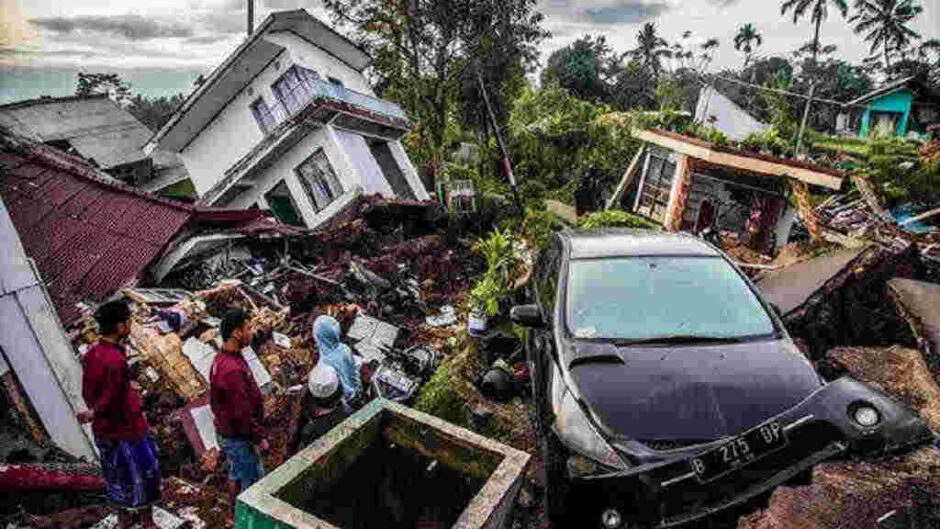 Two days ago, a 5.6 magnitude earthquake shook the densely populated island of Java, where Indonesia’s capital city, Jakarta, is located. Houses, schools and mosques collapsed, and there were landslides. Some 268 Indonesians, and counting, were killed, and many more were injured (ref. 1).

The Bible speaks of earthquakes in diverse places (ref. Matthew 24:7, Mark 13:8, Luke 21:11) in the last days. To add to that, at the time of the second trumpet and vial of the wrath of God, further earthquakes combined with volcanic eruptions around the Pacific Ring of Fire will cause some island landmasses to be cast into the sea (ref. Revelation 8:8, 16:3).

My sense is, after that, much of the nation of Indonesia will be no more, including sections of Sumatra but especially Java, which is the most Islamic part of Indonesia. Indonesia is full of volcanoes. Many have long been dormant. But all should explode at the time of the Ring of Fire. Indonesia is even home to a supervolcano, the Toba caldera in Sumatra, a supervolcano that can rival the USA’s own Yellowstone.

… God is our refuge and strength, a very present help in trouble. Therefore will not we fear, though the earth be removed, and though the mountains be carried into the midst of the sea; Though the waters thereof roar and be troubled, though the mountains shake with the swelling thereof… There is a river, the streams whereof shall make glad the city of God, the holy place of the tabernacles of the most High [Temple Mount, Jerusalem]. God is in the midst of her; she shall not be moved… The heathen raged, the kingdoms were moved: he uttered his voice, the earth melted… Come, behold the works of the LORD, what desolations he hath made in the earth… Be still, and know that I am God: I will be exalted among the heathen, I will be exalted in the earth.

Historically, Indonesia came about because of the Chinese Ming dynasty admiral Zheng He. In the early 15th century, Zheng He’s mighty fleet, whose ships dwarfed those of Christopher Columbus and the rest of Europe, sailed across Asia and to West Africa. It was Zheng He’s voyages that brought Islam to Asia. This fact is even noted by Indonesian scholars. Before then, Indonesia was largely Hindu, evident by the Hinduism of the island of Bali.

Then, during the Cold War in the 1960s, Indonesia became more Islamic after lynching hundreds of thousands of non-Muslims across the country, particularly atheists and leftists, many of whom were ethnic Chinese (ref. 2). This happened with the blessing of America’s CIA, and despite the rhetoric of Pancasila, the part about “social justice for all of the people of Indonesia”. The 2013 documentary “The Act of Killing” reminds the world of how Islamists came to dominate the whole of Indonesia. Some of them that participated in the mass killings have confessed to being high on marijuana and ecstasy at the time.

During the Cold War, Indonesia also conquered East Timor, and thus killed hundreds of thousands of Catholics there, and also Fretilin leftists.

More recently, East Timor has been taken from Indonesia, and made independent.

Now, in the island of West Papua, there is an ongoing armed struggle between the government of Indonesia and Christian Papuans, natives made Christian by the Dutch. In the 1960s, despite the promises of the Netherlands to West Papua for self-determination, Indonesia militarily seized West Papua for itself. The flag of West Papua, which today is outlawed by Indonesia, is that of “the morning star” (ref. Revelation 22:16), a Christian concept.

I speculate, West Papua will also be taken away from Indonesia in due time, either as a consequence of China, or else Singapore, or else both. More about Singapore in a moment.

Some years ago, there was talk of a Chinese military presence in Papua New Guinea, as part of China’s Belt and Road. Australia, nowadays self-centered and confused, regarded the potential Chinese military base there as a threat. So, Australia worked diplomatically and through its intelligence agencies to spoil the idea.

Subsequently, dramatic events in the nearby Solomon Islands led China to establish a presence there instead.

By the way, the Solomons was just shaken by a 7.0 earthquake. Apparently, one of the buildings damaged was Australia’s embassy in Honiara (ref. 3).

Now, what about Singapore?

Singapore, which became an independent nation in 1965, after briefly federating with nearby British Malaya, can be regarded as another “kingdom”, or realm, of the nation of Malaysia.

And when ye shall hear of wars and rumours of wars, be ye not troubled: for such things must needs be; but the end shall not be yet. For nation shall rise against nation, and kingdom [realm] against kingdom…

Besides that, in 1991, a joint Malaysian and Indonesian military exercise, codenamed “Pukul Habis”, which means “Total Wipeout”, nearly started a war between Indonesia and Malaysia on one side, and Singapore on the other. Pukul Habis was a parachute drop just 20km from Singapore’s border, and it happened on Singapore’s National Day Parade, the day of Singapore’s independence, a public holiday. Pukul Habis prompted Singapore to secretly mobilised its entire Armed Forces. On that day, six codes were flashed on television, soldiers were assembled at designated areas, weapons were handed out, and even land mines were planted.

Singapore might seem like an insignificant country with a small population and not much land, but the Singapore Armed Forces are formidable. In Singapore, National Service means every man at a certain age must undertake military training, and be prepared to fight in a war when necessary. This is like the Israel Defence Forces because Singapore’s army was established by Israel in the 1960s. Lee Kuan Yew called them “the Mexicans”, the secret contingent of IDF officers, who went to Singapore to help build an army from scratch.

It is also not for nothing that Singapore is known as “the lion city”.

… behold, the Lion of the tribe of Juda, the Root of David, hath prevailed…

So, at the appointed time, Singapore may well fight in the region that it is in, for the LORD of hosts.

The Bible suggests that Mystery Babylon and the west, who will align with the Antichrist, consider Indonesia, population some 276 million, as a great potential for their side in the world war to come.

… thou also shalt seek strength [numbers] because of the enemy [the kings of the east].

However, an act of God will see an end to that. And when that happens, the west shall come to fear the name of the LORD.

According to their deeds, accordingly he will repay, fury to his adversaries, recompence to his enemies; to the islands [e.g. Java] he will repay recompence. So shall they fear the name of the LORD from the west, and his glory from the rising of the sun. When the enemy shall come in like a flood, the Spirit of the LORD shall lift up a standard [a flag representing the winepress of God] against him. And the Redeemer shall come to Zion…

Java, which includes the capital Jakarta, will almost surely go into the sea, at the time of the eruption of the Ring of Fire. Java is where the mass killings began in October 1965, genocidal killings that also meant the severing of the fruit of Dutch Protestants throughout Indonesia.

… it is written, Vengeance is mine; I will repay, saith the Lord.

Make no mistake, Islam is antichrist, and the god of Islam is not greater.

In these last days, either through war or natural disaster, Indonesia will lose ground.

Then, what remains of Islam in the region, the new Nusantara in Kalimantan, Borneo, which happens to neighbour the former British colony of Sarawak, the most Christian part of Malaysia, may well be persuaded by Christians that are there to renounce evil and exalt God, the creator of heaven and earth.

1. Johan Purnomo and Stefanno Sulaiman (22 November 2022), “Indonesia quake kills at least 268 people, many of them children at school”, reuters.com