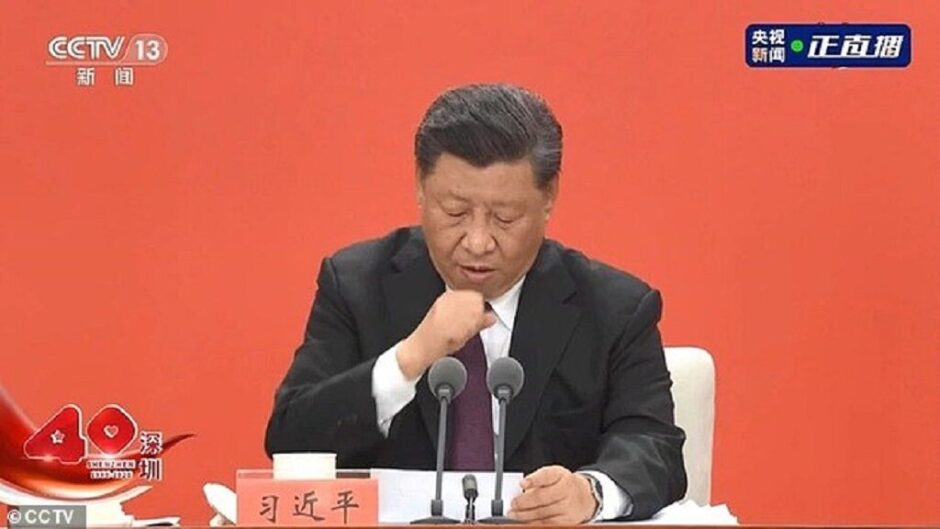 The latest on America’s cold war against China is that the US Food and Drug Administration has said that it intends to shift to annual COVID-19 vaccine shots (ref. 1). They would like you to think that COVID-19 has become like a cold, the common flu. They would like you to think that the pandemic has become endemic. But COVID-19 is nothing like the flu. The virus that causes COVID-19 is a synthetic RNA virus with a proofreader, which means it should never mutate. This virus also contains elements of HIV, which explains why often COVID-19 destroys the immune system of its victim.

America’s move to annual vaccine shots also implies further variants of the virus, that is to say newer versions of the bioweapon, must be in the works. These coming iterations will no doubt be more contagious and more vicious.

The Devil’s men now have China on the ropes, and they are going for the knockout: they intend to launch wave after wave of the virus until China ceases to exist. Percy Shelley, speaking for the Devil, put it this way: “Look on my works, ye mighty, and despair!”

I did say that the idea of herd immunity, and a nation being protected through herd immunity, was always a ruse. The American government’s actions have now proven this point.

There is, however, a flaw in this plan of theirs.

A health official in China has admitted that over 1.1 billion people in China may have been infected since zero-COVID was abruptly abandoned late last year (ref. 2). The death toll, despite the official figure a few weeks ago of approximately 60000, is now estimated by many to be at least in the hundreds of thousands, approaching a million (ref. 3).

With multiple variants of the virus now so widespread in China, if the virus is mutating as the propaganda would have you believe, would it not be so that at some point, mathematically speaking, a new variant must emerge in China? So far, nothing at all like that has happened.

This is the flaw in their plan!

A few days ago, a video about COVID in China said that reporters from Radio Free Asia were out and about in China supposedly trying to cover the news of the rapid spread of COVID in China. On many occasions, local authorities blocked them. It is no secret that Radio Free Asia is a front for the CIA, and CIA agents often pose as journalists (eg, Operation Mockingbird) to gain access to an area. If the CIA is trying to secretly release a new variant in China and they are caught in the act, then the jig is up, and China will retaliate with war or with a different sort of WMD. If, however, the CIA changes it mind and decides not to do this, and consequently, no new so-called “mutation” arises in China, then it all looks ever more suspicious, and inevitably people will figure out that the virus that causes COVID is an unnatural virus that does not mutate.

If Xi has caught COVID, it might be that Xi has taken the traditional Chinese medicine Lianhua Qingwen. The part of this TCM antiviral that helps the body fight against the virus that causes COVID is the ingredient honeysuckle, the plant Lonicera japonica. Honeysuckle is a naturally occurring generic antiviral (ref. 6). It reduces the amount of the virus in the human body by hindering the virus’s ability to replicate. This antiviral is effective against the flu virus, against the SARS virus and even against the Ebola virus.

The problem with Lianhua Qingwen, and this is something I only realised in 2022, is that it contains the ingredient ephedra, which is something that is used to make the drug methamphetamine. The presence of ephedra, from Ephedra sinica, known to the Chinese TCM industry as Ma Huang, means Lianhua Qingwen is prohibited in Australia (ref. 7). It is said, ephedra is in this TCM because it does something for coughs. But ephedra means this TCM essentially contains a mind-altering drug, equivalent to a narcotic.

The inadvertent consumption of a mind-altering drug such as methamphetamine, or even an opioid-based painkiller, would explain Xi Jinping coming under the influence of an evil spirit. This would explain Xi’s sudden change of behaviour.

Notice a few days ago, Xi remarked that he was now troubled by the “fierce and serious” spread of COVID across China (ref. 8). This is kind of like a flip-flop from his earlier flip-flop from zero-COVID. Zero-COVID, though unpopular, would have been divinely inspired. With hindsight, clearly, zero-COVID protected China for at least three years.

I do not know if Xi taking Lianhua Qingwen, assuming he did do so, was supposed to happen. Regardless, the fact that Xi has now flipped-flopped again tells me that this is not yet possession but only influence.

Be sober, be vigilant; because your adversary the devil, as a roaring lion, walketh about, seeking whom he may devour

I suppose, there are now demons and angels near him, trying to pull him in different directions, not unlike the cliche of a demon on one shoulder and an angel on the other.

The Bible teaches that the way for a person to resist a demon at a time of “tribulation” (ie, testing) is to be more Christian. This is the meaning of “the armour of God” in Ephesians 6.

The problem is that Xi is not a Christian at all. He has absolutely no idea what is happening and what to do.

As for China being a nation of atheists in these last days, that is Bible prophecy. Ezekiel describes “the men of the east” as neither Jewish nor Christian.

I have to say here that at this point, I do not know whether Xi can be recovered, or whether Xi is to be replaced.

What I do know is that God was involved in Xi’s rise through the ranks of the CCP. I say that because Xi’s name is special. Plus, Xi started off as governor of Fujian, and then he became governor and party secretary of Zhejiang. It cannot be a coincidence that Zhejiang province has the largest population of Protestants in China. Consequently, Xi’s seeming immaculate track record that enabled his promotion to the top job was not a fluke and not entirely his doing.

Even when Bo Xilai and Zhou Yongkang plotted to usurp power from Xi, things miraculously went Xi’s way. It turned out, Zhou Yongkang was not only the domestic security chief in charge of the People’s Armed Police, but he was also into mysticism, connected to a “sage” in Xinjiang (ref. 9), the most Islamic part of China. A sage and mysticism mean demons! So the Devil very nearly got control of China back in 2014.

This thing with COVID that has now happened to China goes to show how dangerous demons are. Just one demon in the wrong place at the wrong time can cause so much death and destruction.

I returned, and saw under the sun, that the race is not to the swift, nor the battle to the strong, neither yet bread to the wise, nor yet riches to men of understanding, nor yet favour to men of skill; but time and chance happeneth to them all. For man also knoweth not his time: as the fishes that are taken in an evil net, and as the birds that are caught in the snare; so are the sons of men snared in an evil time, when it falleth suddenly upon them.

A fifth-column attack is as devilish as it gets. The Bible describes the Devil’s lot as “the treacherous dealers” (ref. Isaiah 24:16).

Something similar is happening in Armenia. There, Nikol Pashinyan, a journalist that had acquired power in 2018 through a Colour Revolution of sorts, has been stacking the Armenian government with the minions of George Soros. Armenia, “Ararat” in the Bible, is supposed to be with Russia in these last days (ref. Jeremiah 51:27), rather than trying to move towards Europe and NATO. Because of the fifth column that is Pashinyan, Armenia has not been able to prevail against Azerbaijan. The latest is that Azerbaijan has blocked the Lachin corridor (ref. 10), putting at risk Armenia’s hold over Artsakh, also known as Nagorno-Karabakh. Furthermore, with shops increasingly bare, there is the likelihood of a humanitarian crisis in Artsakh.

In Ethiopia, there is a ceasefire between the TPLF and the government of Abiy Ahmed Ali. Abiy Ahmed Ali, a military intelligence type, also acquired power in 2018, while pretending back then to be friendly to high-ranking Tigrayans. Though the ceasefire brokered by the African Union means famine in Tigray has been alleviated, it also means the TPLF must give up its heavy weapons (ref. 11). When the fighting inevitably resumes, because it is Bible prophecy that the Renaissance Dam must be a certain way at some point in these last days, the TPLF will surely regret disarming. By the way, Abiy Ahmed Ali claims to be a Pentecostal Christian but has proven to side with the Islamists of Eritrea and the UAE. So, his is also treason from within.

Fifth-column tactics and deception are the sort of things that the Devil likes to do.

“A nation can survive its fools, and even the ambitious. But it cannot survive treason from within. An enemy at the gates is less formidable, for he is known and he carries his banners openly against the city. But the traitor moves among those within the gates freely, his sly whispers rustling through all the alleys, heard in the very halls of government itself. For the traitor appears no traitor; he speaks in the accents familiar to his victims, and he wears their face and their garments, and he appeals to the baseness that lies deep in the hearts of all men. He rots the soul of a nation; he works secretly and unknown in the night to undermine the pillars of a city; he infects the body politic so that it can no longer resist. A murderer is less to be feared.” – Marcus Tullius Cicero

The good news is that with the advent of the kingdom of God, the nature of the contest between good and evil will change.

After the day of the LORD, a demon on one shoulder and an angel on the other will no longer be a thing.

After that day, demons will come to fear the light.

… and the wicked shall be silent in darkness…

4. Chris Pleasance (16 October 2020), “China’s President Xi violently coughs throughout speech, prompting speculation on his health, as state media cuts away each time he is forced to stop speaking”, dailymail.co.uk