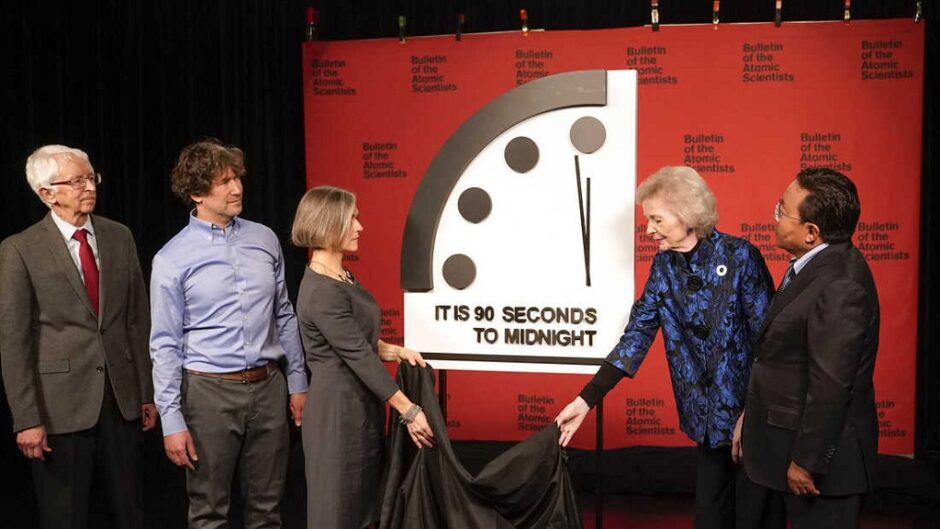 This January 2023, the Bulletin of the Atomic Scientists, a US-based advocacy group that has been against nuclear war ever since Hiroshima and Nagasaki, set their “Doomsday Clock” to 90 seconds before “midnight” (ref. 1). One newspaper put it this way: “Doomsday clock closest ever to Armageddon” (ref. 2).

The choice of words “doomsday”, “Armageddon” and even “midnight” all happen to be biblical.

Therefore, even though the Bulletin of Atomic Scientists cited nuclear risk, biological threats, disruptive technologies, and for some reason also climate change, this shift in the Doomsday Clock to its closest ever point to midnight must have been divinely inspired.

To be clear, Armageddon is still several years away. As of now, the second seal has not yet even been opened – the red horse of the apocalypse that would mean World War 3.

Now, what prompted this dramatic shift in the Doomsday Clock?

Today, there is news that Germany has agreed to supply Leopard 2A6 tanks to Ukraine, initially 14 (ref. 3). Other nations, such as Finland, Spain and the Netherlands will also send several Leopard 2A6s, and Poland and Norway will send some number of Leopard 2A4s. France, which has decided to give Ukraine AMX-10RCs, wheeled reconnaissance tanks, is now considering supplying heavy Leclercs as well (ref. 4). Above all, in an about face, the USA too will supply Ukraine with heavy tanks – the American-made Abrams, for now, 31 (ref. 5).

The use of depleted uranium in Iraq caused widespread radiation poisoning and subsequently saw many Iraqi babies with birth defects and that sort of thing. This reminds of America’s use of the chemical called Agent Orange during the Vietnam war.

So, if the war for Ukraine is going nuclear, then Russia might field its tactical nukes. If the land is going to be irradiated, what is the difference?

This shift from conventional weapons to nuclear weapons was always going to happen at some point.

I think it is this step towards doomsday that explains the new setting of the Doomsday Clock.

As I see it, America has already launched a WMD against China, the insidious bioweapon SARS-COV-2.

As for when and how and against whom Russia goes nuclear, that is a matter between Russia and Almighty God.

The Bible describes nuclear weapons as the weapons of God’s indignation.

They come from a far country, from the end of heaven, even the LORD, and the weapons of his indignation [thermonuclear bombs], to destroy the whole land. Howl ye; for the day of the LORD [known to some as “doomsday” or judgment day] is at hand; it shall come as a destruction from the Almighty.

Those of you who still think America is good are in for a shock.

Her princes [demons] within her are roaring lions [think 1 Peter 5:8]; her judges [leaders and government] are evening wolves; they gnaw not the bones till the morrow. Her prophets are light and treacherous persons [false Christians that secretly worship Satan]…

Notice in Zephaniah 3, Babylon’s “judges are evening wolves”. This means, when the night comes, these wolves will attack and eat sheep – that is to say, Christians.

Now, in regard to doomsday, something many might have missed is that it will not only be continental USA that will burn. Zechariah 5 reads, this fire and curse from God will go forth across the whole earth.

And he said unto me, What seest thou? And I answered, I see a flying roll; the length thereof is twenty cubits, and the breadth thereof is ten cubits. Then said he unto me, This is the curse that goeth forth over the face of the whole earth… I will bring it forth, saith the LORD of hosts…

This is because Mystery Babylon sits upon many waters (ref. Revelation 17:1). She reigns over the kings of the earth (ref. Revelation 17:18) and is truly a worldwide superpower. The United States of America has hundreds of military bases, CIA black sites, and bio-security laboratories across the world. All of it must come to an end.

Mystery Babylon has also corrupted the nations spiritually (ref. Revelation 17:2). Those that share the values of America especially freedom of religion (ref. Revelation 17:5) and Freemasonry (ref. Isaiah 23:16) are as evil as America. For this reason, some of the nations that have allied with her and are fighting alongside her must also be punished.

… for my determination is to gather the nations, that I may assemble the kingdoms, to pour upon them mine indignation [think God’s weapons of indignation], even all my fierce anger: for all the earth shall be devoured with the fire of my jealousy.

Further to this point is the prophecy of Isaiah 24. Some people read Isaiah 24 as hyperbole and as a metaphor that speaks to the beast of the earth (ref. Revelation 13:11), meaning Mystery Babylon, the land of the False Prophet. Others read Isaiah 24 literally, meaning the whole of planet earth.

Behold, the LORD maketh the earth empty, and maketh it waste, and turneth it upside down, and scattereth abroad the inhabitants thereof. And it shall be, as with the people, so with the priest… The land shall be utterly emptied, and utterly spoiled: for the LORD hath spoken this word… The earth also is defiled under the inhabitants thereof; because they have transgressed the laws, changed the ordinance, broken the everlasting covenant. Therefore hath the curse devoured the earth, and they that dwell therein are desolate: therefore the inhabitants of the earth are burned, and few men left.

My position is somewhere in between. It cannot be that the whole earth is to burn, because “scattereth abroad the inhabitants thereof” would have to mean the remnant is to flee to outerspace. Nor can it be that only continental USA is to burn, because Isaiah 24:21 reads the LORD shall punish the kings of the earth as opposed to merely the king of Babylon.

And it shall come to pass in that day, that the LORD shall punish the host of the high ones that are on high, and the kings of the earth upon the earth. And they shall be gathered together, as prisoners are gathered in the pit, and shall be shut up in the prison…

Remember, America is everywhere, and everywhere America must be brought to an end.

Make bright the arrows; gather the shields: the LORD hath raised up the spirit of the kings of the Medes: for his device is against Babylon, to destroy it; because it is the vengeance of the LORD… O thou that dwellest upon many waters, abundant in treasures, thine end is come…

Precisely which locations, in which nations, are to burn is a matter between God and those like Russia that wield the weapons of his indignation.

When the fires do begin and when doomsday and the end finally comes, true Christians the world over will rejoice, for all this is not only the wrath of God but also the beginning of the end of evil.

Wherefore glorify ye the LORD in the fires, even the name of the LORD God of Israel in the isles of the sea.

His eyes were as a flame of fire… And he was clothed with a vesture dipped in blood: and his name is called the Word of God [Jesus Christ, ref. John 1:1-4]… And out of his mouth goeth a sharp sword, that with it he should smite the nations: and he shall rule them with a rod of iron: and he treadeth the winepress of the fierceness and wrath of Almighty God.

2. The Australian (25 January 2023), “Doomsday clock closest ever to Armageddon”, theaustralian.com.au