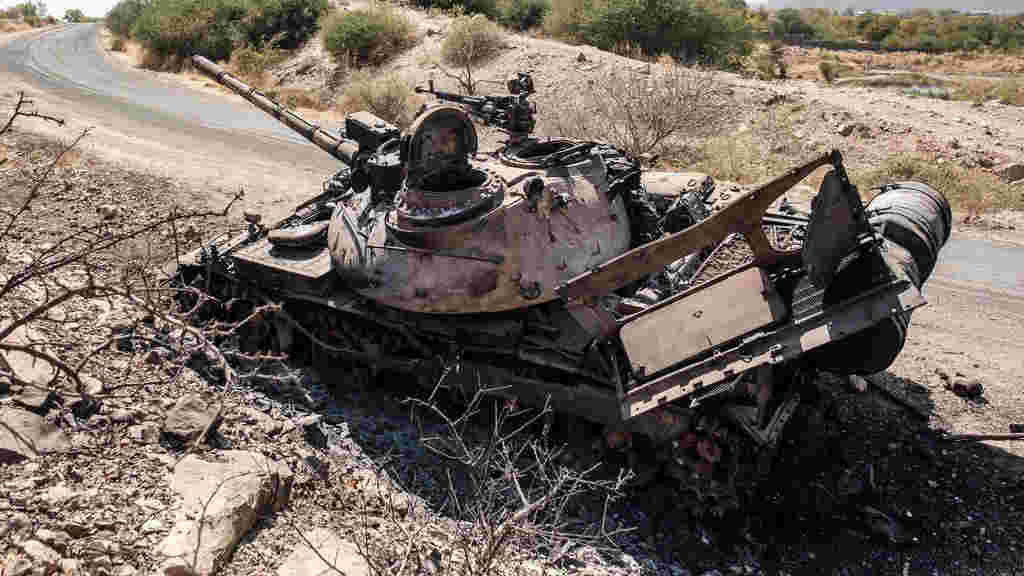 Days ago, after some fighting near Mekelle and after Mekelle itself a city of half a million people was heavily bombarded by artillery for hours, Ethiopia’s PM Abiy Ahmed Ali declared that his military operation against the TPLF was over, and that Mekelle had been captured by his armed forces (ref. 1), and that a police manhunt was now underway for the leaders of the TPLF (ref. 2).

Now, the news is, the TPLF has retaken Axum (ref. 3), and a government MiG-23BN has been shot down and the pilot captured (ref. 3) – and all this after Abiy Ahmed Ali told the world that his military operation against the TPLF had ceased.

So, the war continues. Apparently, the TPLF had only moved away from Mekelle in what can be described as a tactical withdrawal.

About the plane that was brought down, the MiG-23BN is the same sort of plane that has been carrying out airstrikes against Tigray for weeks (ref. 4). These jets have been seen over the skies of Tigray, together with the armed drones of the UAE, another Islamic country involved in this war besides Eritrea.

No wonder the TPLF fired rockets at Eritrea, six of which hit Asmara a few hours after Abiy Ahmed Ali’s proclamation that the war was over (ref. 5).

Speaking of Eritrea, there are reports that thousands of Eritreans who have sought asylum in UN-sponsored refugee camps in Tigray, such as Shimelba and Hitsats, are being rounded up by the Eritrean armed forces who are in Tigray, with the permission of Ethiopia’s Abiy Ahmed Ali, and they are being forcibly returned to Eritrea (ref. 6). The camps are supposed to be under the protection of the UNHCR, and subject to the UN convention on refugees.

Now, I should mention again that before this conflict began, the majority of Ethiopia’s commando force comprised of Tigrayans. As a consequence, the TPLF has the means to win this emerging guerrilla war in the mountainous region of Tigray. What is a commando if not a special forces soldier who is trained to fight behind enemy lines?

And not only that. Tigray as a whole has done this sort of thing before. In the 1980s, Tigray waged, as it were, a people’s war against the then federal government of Ethiopia, the Derg, and prevailed.

Those who have written off the TPLF because Mekelle appears to have fallen into Abiy Ahmed Ali’s hands would do well to study the prophecy of Isaiah 19:6. Logically, if Isaiah 19:6 is to be fulfilled, when Egypt falls into the hands of ISIS per Daniel 11:42 and is for Islam, Ethiopia must be anti-ISIS and against Islam. This means, the TPLF must not only survive the current onslaught of Abiy Ahmed Ali, but go on to retake all of Ethiopia and more!

The odds might seem to be stacked against Tigray. Abiy Ahmed Ali has all the instruments of state power, and the assistance of Eritrea and the UAE. To add to that, Tigray is only a fraction of the size of the whole of Ethiopia in terms of land and population.

Remember, against the odds, Gideon and his 300 defeated the multitudes of the Midianites and the Amalekites (ref. Judges 7), because God was on Gideon’s side.

Who would have thought that the TPLF could bring down an air force jet?

For that matter, who would have thought that the TPLF could destroy an entire division such as the Ethiopian army’s prestigious 21st mechanised division (ref. 7)? Regarding the destruction of that division, it happened because the officer commanding was a Tigrayan, and he understood the way it functioned and fought.

It is a great honour and a glorious thing to be a soldier on the correct side of this emerging world war, which is a righteous war.

The outcome of this world war, the final war of mankind, is assured. It is an act of faith to know that, in the end, evil will be defeated.

Today, in Borno Nigeria, over a hundred farmers and fishermen in a village were summarily killed by Islamic militants, loyal either to ISIS or Boko Haram (ref. 8). Many of those killed were beheaded. Besides that, several women from the area were abducted, likely taken into Islamic sex slavery.

Those who have been called by God to be a soldier on the side of good in these last days should know that they are not only fighting for their lot but also for those who cannot defend themselves.