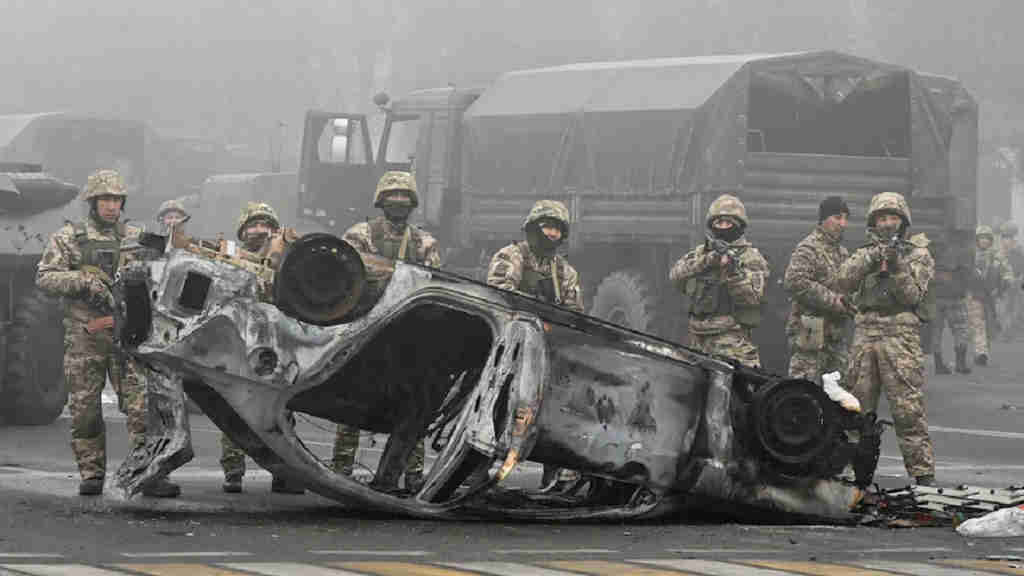 Last Sunday, a protest started in western Kazakhstan concerning the rising price of liquefied petroleum gas, which is used by many there to fuel their cars (ref. 1). On Tuesday, the government of Kazakhstan announced that it would rescind the price increase (ref. 1). But by then the unrest had spread to Almaty and the capital Nur-Sultan. In Almaty, the next day, a group carrying clubs and shields converged on the mayor’s office, and went on to storm the building and set it ablaze (ref. 2). They even attacked and killed dozens of police officers. One police officer was found beheaded (ref. 2). So far, 120 cars have been burnt, including 33 police vehicles, and some 400 businesses have been damaged (ref. 1). Clashes between protesters and police have seen hundreds of protesters and police in hospital and several dead.

In Kazakhstan, there has not been violent unrest like this for decades.

Unable to satisfy the protesters, much of the government of Kazakhstan has resigned. But even so, the protests continue. The protesters have now seized the country’s main airport (ref. 1).

This is beginning to look like a Maidan-style uprising, and even an Arab spring.

Euromaidan in Ukraine began as a protest, but was subsequently hijacked by Ukrainian neo-Nazis, and then later even involved the CIA – that is to say, the three snipers from Georgia and the two from Lithuania and their American leader that opened fire on both the protesters and Ukrainian Berkut to further agitate the unrest.

By the way, the word “maidan” is an Arabic word that Ukraine adopted from the Ottoman Empire.

Kazakhstan is now under a state of emergency.

Chairing the security council of Kazakhstan, President Kassym-Jomart Tokayev called for support from the Collective Security Treaty Organisation, CSTO, because the integrity of the state of Kazakhstan is at risk, and what is happening is not only “criminal” but “terrorism” (ref. 3).

To help Kazakhstan re-establish order, a Russian-led CSTO peacekeeping force is on the way there.

Russia’s Foreign Ministry said yesterday that the destabilisation of Kazakhstan is no doubt “foreign-inspired” (ref. 4). Belarus also noted that the incidents across Kazakh cities were obviously “coordinated and planned” (ref. 4). Serbia went further, saying they know that “foreign intelligence services” are to blame (ref. 4).

Certainly, the timing of it all is suspicious. Russia and the US are almost in a state of war over Ukraine and NATO’s steps eastward. If Kazakhstan’s Tokayev were to be toppled as Ukraine’s Yanukovych was, Ukraine and Kazakhstan would become a pincer for NATO against Russia.

Kazakhstan is also currently within China’s Belt and Road initiative. A different Kazakhstan might change that.

Despite Kazakhstan having a majority of Sunni Muslims, I don’t think Kazakhstan generally will align with the prophetic fourth beast. Iran, yes. Afghanistan, sure. But Kazakhstan, no. Kazakhstan is not only within the CSTO, it also borders both Russia and China.

For that matter, modern-day Kazakhstan is not within the boundaries of either ancient Medo-Persia or the Greek empire of Alexander the great. Seleucia also did not include the lands north-east of the Caspian sea.

That said, the fourth beast, which will be an empire unlike any the world has ever seen, will surely break some nations into pieces. This means, there will be violence across the world, wherever there are fanatical Muslims.

Indeed, it seems, some of the Muslims of Kazakhstan have gone berserk ahead of time.

Now, there is something else to be said about Kazakhstan, the area known as the Eurasian Steppe. Over a thousand years from today, I think this area will be significant in regard to Bible prophecy.

Though I have no foresight and so I cannot say for sure, and though this is merely an educated guess, a reasonable conclusion, I think, this area is “the land of Magog”, as in Ezekiel 38 and Revelation 20:8.

Genesis tells that Magog was the son of Japheth, and moreover Meshech and Tubal were Magog’s brothers.

Now these are the generation of the sons of Noah, Shem, Ham, and Japheth: and unto them were sons born after the flood. The sons of Japheth; Gomer, and Magog, and Madai, and Javan, and Tubal, and Meshech, and Tiras.

The land of Magog, and Gog who is the chief prince (demon) of Meshech and Tubal, are all mentioned in Ezekiel 38.

Son of man, set thy face against Gog, the land of Magog, the chief prince of Meshech and Tubal, and prophesy against him…

Gog is no doubt Satan himself, because Satan will be loosed from his prison of hell after the end of the Millennial Reign of Jesus Christ.

And when the thousand years are expired, Satan shall be loosed out of his prison, And shall go out to deceive the nations that are in the four quarters of the earth, Gog and Magog, to gather them together to battle: the number of whom is as the sand of the sea.

Modern-day Kazakhstan was once the land of the Sarmatians, an Iranian type people related to the ancient Scythians. Genetically, Iranians are more European than Arab.

Of course, long ago Islam swept through the area, and subsequently so too did the Mongols.

What remains the same about the land of Kazakhstan is the horse. It is said that the horse was first domesticated in Kazakhstan. Even today, the horse remains an integral part of the culture and identity of the Kazakhs (ref. 5). So, long before the Mongols of the Eastern Steppe did their thing with archers on horseback, the people of the Eurasian Steppe were already riding horses. It makes sense that these were the people of Magog, the descendants of Japheth after the flood of Noah’s ark, because Noah’s ark is said to rest on Mount Ararat, which borders Turkey and Armenia, and that is not too far away from the Eurasian Steppe.

This is why I think the Eurasian Steppe might be what Ezekiel 38 means by “the land of Magog”.

As for why I focus on the horse, in Ezekiel 38, the armies of Gog of Magog will come towards the holy land on horses and literally as horsemen wielding swords.

… and I will bring thee forth, and all thine army, horses and horsemen, all of them clothed with all sorts of armour, even a great company with bucklers and shields, all of them handling swords

You see, during the Millennial Reign, there will be world wide peace. For this reason, no one shall learn war anymore.

… for out of Zion shall go forth the law, and the word of the LORD from Jerusalem. And he shall judge among the nations, and shall rebuke many people: and they shall beat their swords into plowshares, and their spears into prunninghooks: nation shall not lift up sword against nation, neither shall they learn war any more.

This means, there will be no tanks or guns or bombs anymore. It follows then that horsemen by the time of Gog of Magog will be literally men riding horses, and furthermore Gog’s army will resort to swords and shields, because no one will know how guns and bombs work anymore.

So the matter comes down to this: Which among the nations might still use horses over one thousand years from now? The answer must be Kazakhstan, a country of the Eurasian Steppe, a land of vast plains, where man first tamed the wild horse, and where the horse remains a cherished and an integral part of their culture, despite the latest in transport technology.