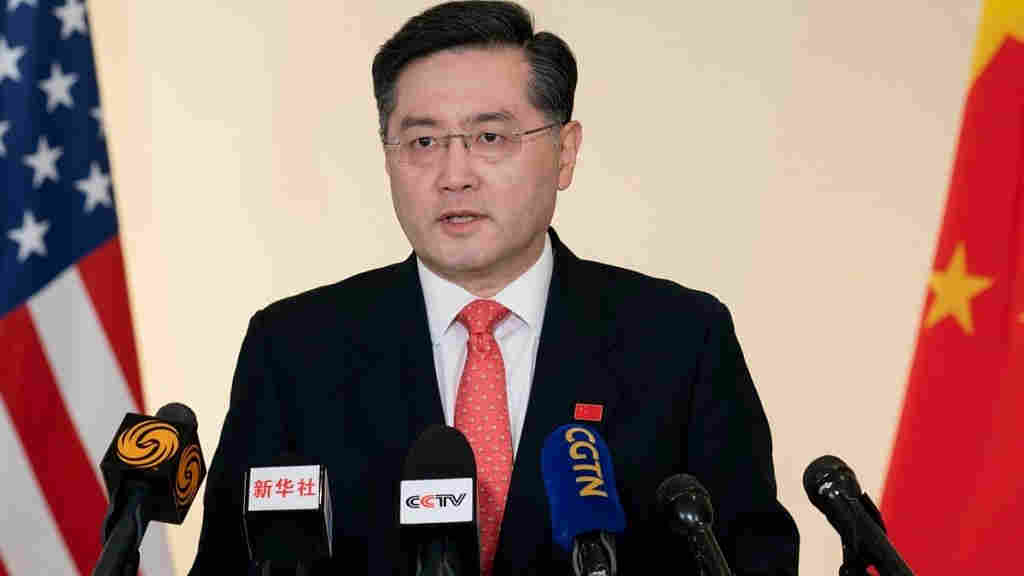 Today, in an interview with NPR, his first with a US journalist since becoming ambassador, China’s ambassador to the US Qin Gang warned that if Taiwan, having been “emboldened by the US” in recent times, keeps going down the road of independence, there will be “military conflict” between China and the United States (ref. 1). Qin further warned that the Taiwan issue is a “tinderbox”, and “those who play with fire will get burned” (ref. 2).

It is said that Chinese officials rarely speak in such unequivocal terms.

For the longest time, China has put up with provocations from the US concerning Taiwan, giving the benefit of the doubt that the US actually means what it says about adhering to the principle of One China. The presence of US troops in Taiwan (ref. 3), and “devil dogs” at that, was once a line drawn in the sand. The US crossed that line in 2020. Yet, back then, China looked the other way. Perhaps back then, it was not yet the appointed time for war to break out between the superpowers.

But now, in this seemingly special year of 2022, as the world watches Russia and Ukraine and NATO build up towards war, a process that has gone on for several months now, suddenly there is talk also of war between China and the USA over Taiwan.

A few days ago, I pointed out that in nature a male lion always fights in a coalition, and a female lion always hunts in a pride. In nature, for the lion, the most powerful of all animals that God created, there is strength in numbers.

It might well be that the armed forces of Russia and China are both able to prevail in their respective theatres on their own, because both have the weaponry and the numbers to do so, no matter how many nations are against them. But when Russia and China take on at the same time their primary opponent, that opponent must divide, and so the outcome will be a foregone conclusion.

It must be said, the USA has no intention of maintaining the status quo. In the grand scheme of things, the USA does not merely want to contain Russia and China militarily, and hold down their GDP. Increasingly, it is clear that the USA actually wants ​every nation in this world to be subject to its decrees (e.g. sanctions and whatnot) and to follow its way of life (e.g. LGBTQ, the woke thing, religious cults such as the Jehovah’s Witnesses, Islamists, and whatever else that Satan happens to fancy from time to time). In other words, Babylon the Great wants nothing less than complete world domination, perhaps literally a “one-world government” not unlike the days of Nimrod and the Tower of Babel. Indeed, the United Nations already assembles in the USA.

The USA used Maidan 2014 to destabilise and depopulate Ukraine, and make Ukraine a certain way politically. For the USA, Ukraine has become a means to regain control of Russia, the way it once did towards the end of the Cold War.

Why do I say the USA wants to retake China? Once, and for a long while, China was under the control of Satan. It was liberated by God through an unlikely group of ordinary Chinese peasants. This did not happen at the time of the revolution of 1911. Sun Yat Sen and Chiang Kai Shek were members of occult secret societies. Today, these sorts live on in Taiwan. They even perform Nazi-like salutes, when taking oaths of office, as incredible as that might sound.

In the same way, the Ukrainians that aided and abetted Hitler’s Einsatzgruppen to carry out atrocities such as Babi Yar live on today in Ukraine through Neo-Nazi groups such as the Azov Battalion. These sorts proudly emblazon themselves with Nazi SS patches. During WW2, the Schutzstaffel or SS was not like the Wehrmacht. Heinreich Himmler’s black-uniformed SS was openly into the occult, carrying out mystical rituals at Wewelsburg castle, for instance. The Einsatzgruppen’s holocaust by bullets was essentially an SS thing.

Try as he might, and despite all the power of the Assyrian’s fourth beast, Satan will not realise a one-world government. At least, the kings of the east, namely China and Russia, will fight back.

Maybe there will be others as well.

Germany once pledged “never again” (ref. 4). Can Olaf Scholz of the SPD succeed where Angela Merkel of the CDU failed? I noticed that Germany refuses to sell weapons to Ukraine, and refuses to even permit Estonia to transfer German-made weapons to Ukraine (ref. 5). There is also some indication that France is pursuing a path independent from the USA (ref. 6). Maybe Europe will go one way and then reverse course once it finally becomes clear that the USA is actually evil – and yes, there will be such a time.

Whatever happens, when the moment comes for China to wake up and stand up, this world will tremble. For the power and strength of China comes from Almighty God. It is the LORD of hosts who has given strength to the horse, a horse of fire and smoke and brimstone.

Hast thou given the horse strength? hast thou clothed his neck with thunder? Canst thou make him afraid as a grasshopper? the glory of his nostrils is terrible. He paweth in the valley, and rejoiceth in his strength: he goeth on to meet the armed men. He mocketh at fear, and is not affrighted; neither turneth he back from the sword. The quiver rattleth against him, the glittering spear and the shield. He swalloweth the ground with fierceness and rage: neither believeth he that it is the sound of the trumpet.

6. Patrick Wintour (26 January 2022), “Why are Germany and France at odds with the Anglosphere over how to handle Russia?”, theguardian.com