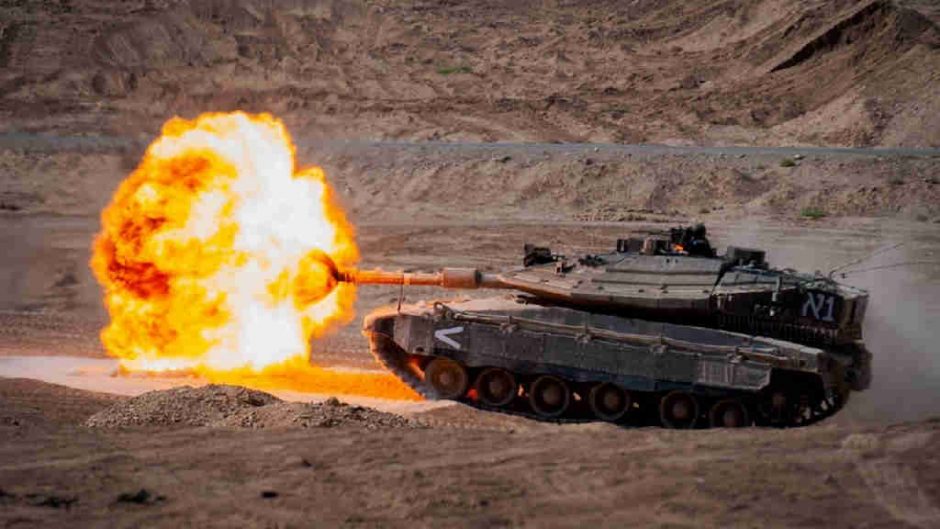 One year ago, the Israel Defence Force commenced a military exercise codenamed “Chariots of Fire”. The exercise was stopped and postponed due to an actual conflict with Hamas over the Temple Mount and the neighbourhood of Sheikh Jarrah.

Now, Israel has resumed the exercise, which will carry on for one month, and will involve all elements of the IDF: “There won’t be a unit that doesn’t take part in this drill”, said an IDF spokesman (ref. 1). The purpose of the exercise is to prepare Israel for a multi-front war, and for full-spectrum combat across land, air, sea, cyber.

The name of the exercise “Chariots of Fire” is meaningful. It alludes to the end-time prophecy of Nahum 2.

Nahum 2 speaks of chariots “with flaming torches” and chariots that “seem like torches”. In other words, chariots and fire.

The actual expression “chariots of fire” also occurs in the Bible, in 2 Kings 6:17.

And Elisha prayed, and said, LORD, I pray thee, open his eyes, that he may see. And the LORD opened the eyes of the young man; and he saw: and behold, the mountain was full of horses and chariots of fire round about Elisha.

There, the word “chariot” is “rekab”. There, “chariots of fire” is רכב אש, which means fiery carriages of angels.

The Hebrew name of the IDF’s exercise is מרכבות האש. So, here, “chariot” is “merkava”, as in the name of Israel’s main battle tank.

The name of the exercise, “merkava ha-esh”, literally means “the fire of chariots”. For this reason, it points to Nahum 2, even though “chariot” in Nahum is also “rekab”.

Nahum 2:1-4 is an exhortation to Israel to prepare for the coming war against the beast with seven heads and ten horns.

He that dasheth in pieces is come up before thy face: keep the munition, watch the way, make thy loins strong, fortify thy power mightily. For the LORD hath turned away the excellency of Jacob, as the excellency of Israel: for the emptiers have emptied them out, and marred their vine branches. The shield of his mighty men is made red, the valiant men are in scarlet: the chariots shall be with flaming torches in the day of his preparation, and the fir trees shall be terribly shaken.

Besides Nahum 2, the expression “Chariots of Fire” also points to the 1981 movie of the same name. This is something I covered last year.

The expression further occurs in William Blake’s 1808 poem “And did those feet in ancient time” – a poem which in 1916 was made into England’s anthem “Jerusalem”, just in time for 1917, the year the British Empire liberated Jerusalem from the Ottomans.

“Bring me my Bow of burning gold:
Bring me my Arrows of desire:
Bring me my Spear: O clouds unfold:
Bring me my Chariot of fire!
I will not cease from Mental Fight,
Nor shall my Sword sleep in my hand:
Till we have built Jerusalem,
In England’s green and pleasant Land.”

The movie “Chariots of Fire” reminds about the year 1924 when a Jew and a Christian on the same British team both won Olympic glory. Think Britain and Jerusalem, 1917. The said Christian, Eric Henry Liddell, was born in China, but educated in a boarding school in England. His parents were Scottish missionaries who worked in China. After his time as an athlete, he returned to China to teach and preach. He died there, in a WWII Japanese prisoner of war camp.

Now, about Nahum 2:1, the meaning of “he that dasheth in pieces”.

The beast, also known as the Assyrian, will be able to dash his enemies to pieces, per Nahum 2:1, because he will wield the supernatural power of Satan (ref. Revelation 13:2, Daniel 8:24).

Indeed, until God intervenes, the beast will be more powerful than every kindred and tongue and nation (ref. Revelation 13:7).

In Daniel 2, it is mentioned that the fourth kingdom shall be as strong as “iron”. Furthermore, in Daniel 2, the feet of the statue of Nebuchadnezzar’s dream is part “clay” and part “iron”.

And the fourth kingdom shall be strong as iron: forasmuch as iron breaketh in pieces and subdueth all things: and as iron that breaketh all these, shall it break in pieces and bruise. And whereas thou sawest the feet and toes, part of potters’ clay, and part of iron, the kingdom shall be divided; but there shall be in it of the strength of iron, forasmuch as thou sawest the iron mixed with miry clay.

Previously, I interpreted the iron and the clay as meaning part professional army and part militia. For example, the armed forces of Turkey fighting alongside the jihadists of ISIS.

And as the toes of the feet were part of iron, and part of clay, so the kingdom shall be partly strong, and partly broken.

But now I am sure that “iron” alludes to the supernatural.

The clue to this is in Daniel 2:43, where clay is likened to “the seed of men”. If clay means humans, then iron must mean angels, or in this context fallen angels.

And whereas thou sawest iron mixed with miry clay, they shall mingle themselves with the seed of men: but they shall not cleave one to another, even as iron is not mixed with clay.

This also explains the biblical expression “a rod of iron”. In Psalms 2:9, Revelation 12:5 and Revelation 19:15, Jesus Christ is said to have the power of “iron”.

And she brought forth a man child, who was to rule all nations with a rod of iron: and her child was caught up unto God, and to his throne.

Thou shalt break them with a rod of iron; thou shalt dash them in pieces like a potter’s vessel.

What is more, in Revelation 2:27, after the day of the LORD, Christians born again who are to serve as priests with kingly power, to be the pillars of the earth, will likewise wield “a rod of iron”, in this context the very power of God, or the Holy Spirit.

And he that overcometh, and keepeth my works unto the end, to him will I give power over the nations: And he shall rule them with a rod of iron; as the vessels of a potter shall they be broken to shivers: even as I received of my Father. And I will give him the morning star.

So, “iron” refers to the supernatural.

This is why the Assyrian will be invincible for the duration of a time and times and half a time, and why it will be Jesus Christ himself who will defeat the Assyrian on the day of the LORD.

… he shall also stand up against the Prince of princes [Jesus Christ]; but he shall be broken without hand.

Therefore, the way to fight back against the beast – and this applies to Israel as well as to the kings of the east – is to kill and even wipe out the “clay”, namely the humans who serve in the armies of the Assyrian.

The horseman lifteth up both the bright sword and the glittering spear: and there is a multitude of slain, and a great number of carcases; and there is none end of their corpses…

Towards the end, and certainly by the time of Armageddon, those nations that are against the beast are for the LORD.