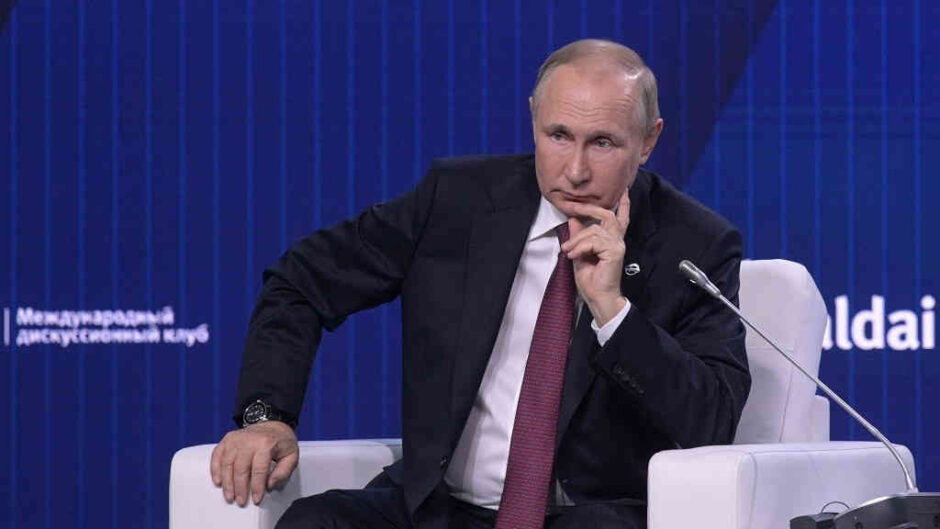 Delivering an address at Valdai forum in Moscow, under the theme “A Post-Hegemonic World: Justice and Security for Everyone”, Russian President Vladimir Putin said a “new world order” is being formed (ref. 1), and Russia, through its fight to free Ukraine from the grip of evil, is doing its part in this endeavour. He is correct.

The phrase a “new world order” might be something you have heard before. You might be under the impression that it refers to the world of the Antichrist. You might also have been told that the first horseman of the apocalypse, the rider on the white horse, is the Antichrist. Nothing can be further from the truth.

Even though the rider on the white horse, from the time of the first seal, goes forth conquering and to conquer, he is a Christian, because a crown – “stephanos” in the original Greek, meaning a crown of victory – is given unto him (ref. Revelation 6:2).

Remember also that Jesus Christ sits upon a white horse on the day of the LORD, and he makes war “in righteousness” (ref. Revelation 19:11).

For, behold, the LORD will come with fire, and with his chariots like a whirlwind, to render his anger with fury, and his rebuke with flames of fire. For by fire and by his sword will the LORD plead with all flesh: and the slain of the LORD shall be many.

The Bible is clear that Babylon the great – a “mystery” (ref. Revelation 17:5) that every Christian and Jew must figure out to be saved in these last days – the polis or civilisation also known as the mother of harlots and abominations, reigns over the kings of the earth, at the time of the end.

Putin describes this reality as “the West’s undivided dominance over the world”.

He is correct, because Babylon is a superpower. No nation has ever had this much geopolitical influence over the whole world.

Not only that, the nations of the world also happen to flow unto her (ref. Jeremiah 51:44) and even assemble in her, in the organisation known as the United Nations, the UN.

So, this is the current reality, the present world order.

What the Bible prophesies, through the apocalypse (revelation) of Jesus Christ, is a new world order.

What is this new world order? It is none other than the kingdom of God with Jesus Christ reigning as the King of kings, the very gospel of Christianity!

And many people shall go and say, Come ye, and let us go up to the mountain of the LORD, to the house of the God of Jacob; and he will teach us of his ways, and we will walk in his paths: for out of Zion shall go forth the law, and the word of the LORD from Jerusalem.

When the Millennial Reign begins, after the day of the LORD, there will be peace among nations – worldwide peace, something never before achieved.

And he shall judge among the nations, and shall rebuke many people: and they shall beat their swords into plowshares, and their spears into pruninghooks: nation shall not lift up sword against nation, neither shall they learn war any more.

For unto us a child is born, unto us a son is given: and the government shall be upon his shoulder: and his name shall be called Wonderful, Counsellor, The mighty God, The everlasting Father, The Prince of Peace. Of the increase of his government and peace there shall be no end, upon the throne of David, and upon his kingdom, to order it, and to establish it with judgment and with justice from henceforth even for ever. The zeal of the LORD of hosts will perform this.

If you think the Antichrist, or the Assyrian, is the one who will bring about the new world order, then you are mistaken, and you don’t understand the bigger picture.

The Antichrist is merely the fourth horseman of the apocalypse, the pale horse. He will do what he is supposed to do at the time of the fourth seal.

The Antichrist is the axe that will hew down (ref. Isaiah 10:12-15) and break off the branches that have become rotten, essentially the deadwood, of the wild olive tree (ref. Romans 11). To put it another way, the Antichrist will play his part in the baptism of fire of Israel (ref. Luke 3:16-17), a necessary tribulation to set free and ultimately save the elect of Israel.

John answered, saying unto them all, I indeed baptize you with water; but one mightier than I cometh, the latchet of whose shoes I am not worthy to unloose: he shall baptize you with the Holy Ghost and with fire. Whose fan is in his hand, and he will throughly purge his floor, and will gather the wheat into his garner; but the chaff he will burn with fire unquenchable.

Apart from that, at some point, the Antichrist will also move against Mystery Babylon, and burn her in some unexpected way.

And the ten horns which thou sawest upon the beast, these shall hate the whore, and shall make her desolate and naked, and shall eat her flesh, and burn her with fire. For God hath put in their hearts to fulfil his will…

You see, Babylon is the epicentre of evil, more evil than Islam. Babylon is the worst of all because Babylon’s constitution even permits outright Satanism. They call it “freedom of religion”. This is the spiritual “fornication” (ref. Revelation 17:2, 18:3) that is being spread throughout the world by the USA.

The Bible says, Babylon cannot be healed, for she is too evil.

We would have healed Babylon, but she is not healed: forsake her… for her judgment reacheth unto heaven, and is lifted up even to the skies.

Babylon has become the habitation of devils and every foul spirit (ref. Revelation 18:2).

Since she is the source of profound evil, Babylon must be utterly destroyed. The hour of judgment will come on the day of the LORD, around the time of Armageddon.

Essentially, Babylon is the opposite of the kingdom of God.

The kingdom of God will bring righteousness and peace to the whole world. By contrast, since its inception in 1776, the United States of America has been at war for about 228 of the 246 years. The Bible describes the men of Babylon as “mighty” (ref. Jeremiah 51:30) because war, in all of its forms, is something they have been doing for ages. When the USA conquered Iraq, literal Babylon, it did so expertly in only 26 days. That war, which made the USA literally “the daughter of Babylon” (ref. Jeremiah 51:33) was clearly unjust, unrighteous. Saddam Hussein never did have WMDs.

You see, either there is world peace, or there are continual wars. Either the world moves towards righteousness, or towards unrighteousness.

So, for there to be a kingdom of God, Babylon must come to an end. For one kingdom to rise, the other must fall.

The stone which the builders refused is become the head stone of the corner [the kingdom of God]. This is the LORD’s doing; it is marvellous in our eyes.

And they shall not take of thee [Babylon] a stone for a corner, nor a stone for foundations; but thou shalt be desolate for ever, saith the LORD.

If you are for the USA, the dominion of the forthcoming false prophet and the mark of the beast, as opposed to the kingdom of God, the coming nation and commonwealth of Jesus Christ, then you are not a true Christian.

Earlier I said rise and fall. To be clear, it will all happen in one day, the day of the Second Coming of Jesus Christ.

Who hath heard such a thing? who hath seen such things? Shall the earth be made to bring forth in one day? or shall a nation be born at once? for as soon as Zion travailed, she brought forth her children.

Now, it is Bible prophecy that sometime after the day of Christ, a number of nations, more likely than not former allies of the USA, will conspire to challenge the kingdom of God.

Why do the heathen rage, and the people imagine a vain thing? The kings of the earth set themselves, and the rulers take counsel together, against the LORD, and against his anointed, saying, Let us break their bands asunder, and cast away their cords from us.

The driving force behind this will not be the Devil because at that time the Devil will be imprisoned in hell. Rather, it will be the Devil’s agents, certain individuals once on the payroll of Babylon that were perhaps overseas at the time of Babylon’s fiery annihilation.

Let’s face it. Today, the USA reigns over the nations not through its military but primarily through the Central Intelligence Agency, the same CIA that recruits from secret societies, and according to one movie The Gray Man (2022) recruits even sociopaths and druggies (ref. 2), meaning the demon possessed.

It is interesting that in The Gray Man (2022), there are references to “wings” and “birds”. This, from a daemon or a genie, speaks to the saints! In one scene, it is even remarked “guardian angel”.

After the reaping of the harvest, each and every saint in Christ’s army will be immortal and invincible. Besides this army will be the angelic army of God led by the archangel Michael. Of course, there will be Jesus Christ himself, and also God the Father. All this means, the kingdom of God will go on forever.

To whom then will ye liken me, or shall I be equal? saith the Holy One [Jesus Christ]. Lift up your eyes on high, and behold who hath created these things, that bringeth out their host [the soldiers of Christ] by number: he calleth them all by names by the greatness of his might, for that he is strong in power; not one faileth.

So, there will be no comeback for Babylon. It is over.

This will indeed be a new world order.