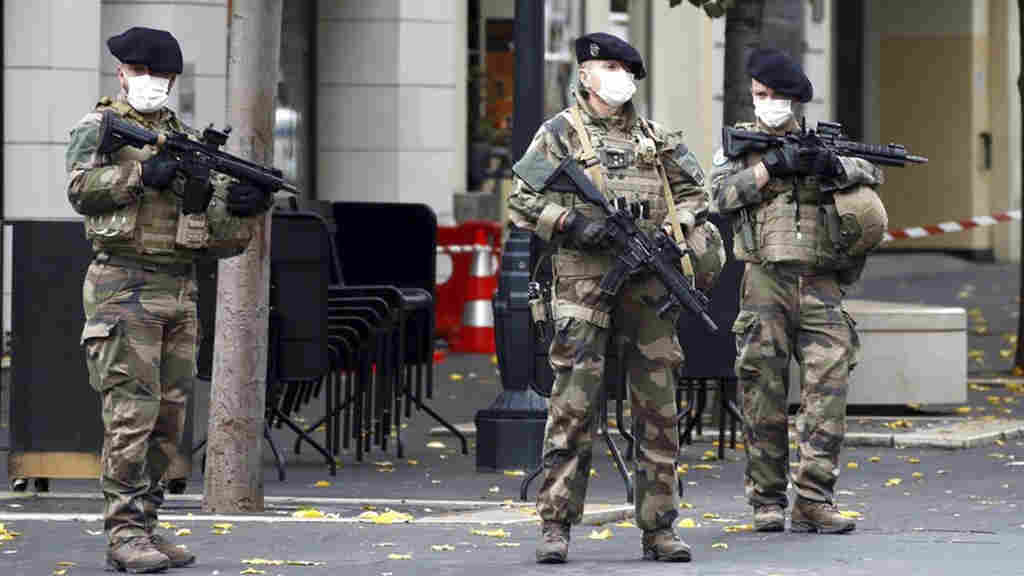 A Tunisian man armed with a knife walked into a church in Nice yesterday, and killed two women and one man, while shouting “Allahu Akbar” (ref. 1). One victim who had her throat cut was almost beheaded.

… and I saw the souls of them that were beheaded for the witness of Jesus, and for the word of God, and which had not worshipped the beast…

Separately, a local man armed with a gun was shot dead by French police in Montfavet near Avignon, after he had threatened passers-by and yelled “Allahu Akbar” just hours after the attack in Nice (ref. 1).

All this comes after the beheading earlier this month of a French teacher, Samuel Paty, who had presented cartoons of Islam’s prophet Muhammad to his students during a civics class. That terrorist, a local of Chechen origin, had received instructions from jihadists in Syria and was operating with seven others (ref. 2).

France is under attack, because it is clear, at least to me, that France in particular and the EU in general will resist the Antichrist! I know this, though it is not mentioned in the Bible, because of the names of Emmanuel Macron and Angela Dorothea Merkel. “Emmanuel” in Hebrew, עמנואל, literally means “God with us”. And “Dorothea” in Greek, Δωροθεα, literally means “Gift of God”.

Plus, in 2018, during his first state visit to China, Emmanuel Macron presented Xi Jinping a gift of a sabre and a horse from France’s elite Republican Guard (ref. 3). To my mind, Macron was moved by the Holy Spirit, who is also the LORD of hosts, to make a point about China being the biblical army of horsemen from the east (ref. Revelation 9:16). What is more, the name of the horse, “Vésuve de Brekka”, derives from “Vesuvius”, which is a volcano in Europe. This alludes to the “fire and smoke and brimstone” of the prophesied horses of the army of horsemen (ref. Revelation 9:17-18).

And to add to that, China decided to transliterate the name “Macron” phonetically as “Ma ke long”, 马克龙. The literal meaning of the three characters 马克龙 is “horse vanquish dragon”!

Because of this, I concluded in 2018 that the Holy Spirit or angels had gotten involved regarding France and China, and that France was being prised from Satan’s hand.

For by grace are ye saved through faith; and that not of yourselves: it is the gift of God: Not of works, lest any man should boast. For we are his workmanship, created in Christ Jesus unto good works, which God hath before ordained that we should walk in them.

France also intervened in Mali in 2013 when America under Obama refused. Since then, France has been in the Sahel fighting against Islamists.

Notice also, in the last few months, a war of words has been brewing between France and Turkey over the Mediterranean and over Libya. Three days ago, Turkey’s president Erdogan even described Macron as having a “mental” problem for appearing to challenge Islam. That incident prompted France to recall its ambassador to Turkey (ref. 4).

After this latest act of Islamic terrorism, Macron remains defiant, declaring “we will never give in” (ref. 5).

France has raised its national security alert to the highest level, “scarlet”. Thousands of soldiers have been deployed to protect churches and schools (ref. 6).

It is noteworthy also that the yellow-vest protests of 2018 against Macron, another attempt by Satan to take back France, has petered out.

The situation in Germany, however, appears to be less certain.

In 2017, hundreds of neo-Nazis in Germany’s police and elite KSK commandos were found plotting a coup against the CDU-led government of Angela Merkel, which was to occur on “Day X”. Besides weapons and ammunition and explosives siphoned from the Bundeswehr, investigators found plans to arrest, transport and execute various prominent political figures. It cannot be a coincidence that the network of conspirators adopted the name “Hannibal”, which literally means “grace of Baal”.

The situation is complicated by the fact that German counterintelligence, BND, which is supposed to protect Germany from this sort of thing is itself rife with neo-Nazis and even descendants of Nazis (ref. 7), due to the CIA’s decision after WWII to employ the Nazi Reinhard Gehlen.

With regard to the Day X conspiracy, the German government has since dismissed the head of Germany’s military intelligence agency and partially disbanded the KSK (ref. 8).

Should Germany fall to Satan, I think France would still be strong enough to resist the Antichrist and eventually recover the EU.

I find it remarkable that Germany’s far-right exalts the Battle of Teutoburg Forest, fought in 9 AD between Rome and the pagan tribes of Germania (ref. 9). The tribes’ leader Arminius was admired during Hitler’s Third Reich and continues to inspire the far-right today. This admiration of Germany’s pagan past reveals the fact that the Nazi movement is more about religion than race.

Of course, Rome did at some point embrace the polytheism of Greece, and produced Nero, thereby making it the sixth power of Satan per Revelation 17:10 – the one that was at the time of John’s Revelation, i.e. “and one is”.

Still, before and after the time of Jesus Christ the Son of man, Rome did fight for the LORD of hosts.

He shall see the travail of his soul, and shall be satisfied: by his knowledge shall my righteous servant justify many; for he shall bear their iniquities. Therefore will I divide with him a portion with the great, and he shall divide the spoil with the strong [Rome]; because he hath poured out his soul unto death…

Furthermore, the Council of Nicaea which confirmed the canon of the Bible would not have happened without Rome and Constantine.

When the empire of Rome eventually collapsed, the mantle of Christianity was passed to the Franks, a tribe of warriors that served Rome in the area of Europe.

The modern-day nation of France derives its name from the Franks.

Clovis, Charles Martel, Charlemagne, and even Godfrey de Bouillon of the 1st Crusade were all Franks.

Subsequently, some of the Franks did fall from grace, notably the Knights Templar (ref. Isaiah 23).

But the history of the Franks before that fall was glorious and honourable. And it is for the sake of those early Frankish Christians perhaps that France is now being saved.

And the city had no need of the sun, neither of the moon, to shine in it: for the glory of God did lighten it, and the Lamb is the light thereof. And the nations of them which are saved shall walk in the light of it: and the kings of the earth do bring their glory and honour into it.

6. Michael Fitzpatrick (29 October 2020), “‘We will not give in to terror’, says Macron as security alert raised to highest”, rfi.fr