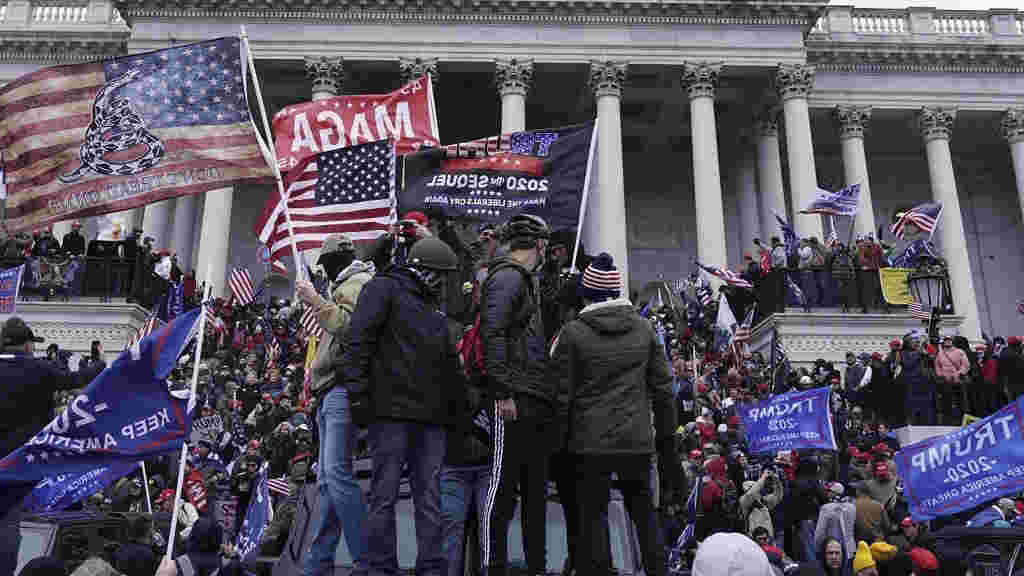 On 6 January (EST), tens of thousands of supporters of Donald Trump gathered in Washington DC as the US Congress assembled to certify the electoral vote count of the 2020 US presidential election (ref. 1).

Democrat candidate Joe Biden had won both the popular vote and the electoral vote of the election of 3 November 2020, but Trump and his loyalists in the Republican party and his supporters among the wider public refused to accept the election results, and claimed that the votes had been fraudulently miscounted. Trump and his “Make America Great Again” crowd believed that the election had been stolen from them. After a series of unsuccessful legal challenges, Trump and his circle, especially attorneys Sidney Powell and Lucian Wood, and also former National Security Advisor Michael Flynn, even contemplated invoking the Insurrection Act of 1807 to use the US military and martial law to overturn the 2020 election (ref. 2). But the idea of imposing martial law to overturn the election was shot down by 10 former Pentagon chiefs. Moreover, the current Chairman of the Joint Chiefs of Staff also signalled that his loyalty was to the US Constitution rather than to an individual (ref. 3).

By convention, the certification process of the US Congress is a mere formality. Still, Trump had been under the impression that Vice President Mike Pence could and would overturn Biden’s win, and he called upon his supporters to gather in Washington DC on that day.

Around noon, Trump addressed the crowd, during which he repeatedly claimed that the election had been stolen: “we will never concede”, “we will stop the steal”, “we will never take back our country with weakness”. After that, the crowd marched towards the US Capitol, and then pushed down the police barricades and some even literally climbed the ramparts. The crowd then smashed the windows and stormed into the US Capitol building.

In the chaos, police shot one protester in the neck, killing her (ref. 4).

The breach forced Congress to stop proceedings and evacuate. Then, the National Guard was deployed, the protesters were pushed back, the Capitol was secured, and order was restored.

That night, a curfew was effected, and Congress was re-assembled to complete the certification of the electoral votes, thereby confirming the 2020 election defeat of Trump.

It is quite hypocritical that only a few weeks ago, Trump and his circle were plotting to invoke the Insurrection Act of 1807 to overturn the election.

Now the Spirit speaketh expressly, that in the latter times some shall depart from the faith, giving heed to seducing spirits, and doctrines of devils; Speaking lies in hypocrisy; having their conscience seared with a hot iron

Perhaps now those evangelical Christians of America who have stood by Trump and regarded him as a Cyrus-like figure, the saviour as it were of both America and Israel, can see the truth.

If anything, Trump, who once blasphemously compared himself to “the King of Israel” and to “the second coming of God” (ref. 5), is a false Christ.

For there shall arise false Christs, and false prophets, and shall shew great signs and wonders; insomuch that, if it were possible, they shall deceive the very elect.

No, Trump is not America’s saviour.

Evidently, Trump is not even a champion of democracy.

As of now, the prospect of Trump somehow holding on to power is slim. The Pentagon has refused to side with him and overturn the election. Vice President Mike Pence is now against him, and so are many Republicans. Also, several White House staffers have resigned.

Besides all that, it might even be said that Satan has given up on Trump. Remember, the Illuminati musician Lady Gaga, who once let slip on the Jimmy Kimmel show that she swears to Lucifer, endorsed Biden and campaigned for him during the 2020 election (ref. 6)!

In my opinion, there is more to this thing that Trump did to the US Capitol on 6 January than meets the eye.

Ordo Ab Chao, “Order Out of Chaos”, is a motto of the Freemasons.

I think, even the spate of US police shootings of African Americans and the resulting Black Lives Matter riots were inspired by Satan. Remember, the Illuminati musician Beyonce, who is married to Jay Z, who has a song about “Lucifer”, made a music video with Frank Ocean for her song “Superpower” in which she romanticises fighting against US riot police!

It seems, the devil’s lot want chaos so that there can be a new order.

It seems, they are laying the groundwork to justify a more militarised police force, and more FEMA concentration camps, and more Executive Orders such as Obama’s 13603 which enables the federal government to seize private property, even the food stores of doomsday preppers, which will make evading the mark of the beast impossible. Of course, true Christians will reject the mark and accept execution. But those who think they can evade the mark by not having to use cash to buy food are in for a shock.

As for this latest crisis at the US Capitol, the end game might well be to get the American public to regard Christians as a menace to society. Already some who equate Trump to evangelical Christians are faulting Christians for this act of sedition (ref. 7).

This will make the coming persecution of Christians in America more palatable to the average American.

And the dragon was wroth with the woman, and went to make war with the remnant of her seed, which keep the commandments of God, and have the testimony of Jesus Christ.

The pre-trib rapture is a doctrine of devils, intended to lull victims into a false sense of peace and safety. Likewise, the idea that Trump and the “prosperity gospel” preachers that stand with him such as Paula White are Christians is a trick.

Christians who have been brainwashed into believing in a pre-trib rapture will likely be deceived into taking the mark. To them, because the rapture has not happened, these are not the last days, and therefore the mark of the beast when it comes cannot be the mark.

Satan is a snake, more insidious and more subtle than many realise.

Now the serpent was more subtil than any beast of the field which the LORD God had made. And he said unto the woman, Yea, hath God said, Ye shall not eat of every tree of the garden?

This reminds me of the poem about “The Snake” that, for some reason, Trump is fond of reciting at his MAGA rallies.

“… She clutched him to her bosom, You’re so beautiful, she cried
But if I hadn’t brought you in by now you know you would have died
She stroked his pretty skin again and kissed and held him tight
But instead of saying thank you, the snake gave her a vicious bite
Take me in, O tender woman
Take me in, for heaven’s sake
Take me in, O tender woman, sighed that vicious snake
I saved you, cried the woman
And you’ve bitten me, but why?
You knew your bite was poisonous and now I’m going to die
Shut up, silly woman, said the reptile with a grin
You knew damn well I was a snake before you took me in …”

To my mind, this is Satan boasting of how successful he has been in deceiving so many who consider themselves Christian.

Do not be duped. Understand the word of God, and fight the good fight. Resurrection is the message of Jesus Christ.

1. Kathryn Diss (7 January 2021), “Protesters were called to Washington by Donald Trump in an unprecedented moment in US history”, abc.net.au

3. Robert Burns (4 January 2021), “Extraordinary warning to Trump against use of military over election by former Pentagon chiefs”, stuff.co.nz

4. ABC (7 January 2021), “US Capitol riots by Donald Trump supporters end with four deaths, including a woman shot by police”, abc.net.au

7. Gina Ciliberto and Stephanie Russell-Kraft (6 January 2021), “They invaded the Capitol saying ‘Jesus is my savior, Trump is my president”, sojo.net